“A-Ah, Lord Runan... I just prefer being quiet, that's all. Besides, it's not like I've done much to be useful, so I really shouldn't be celebrating with the rest of you...”
—Narron, in a conversation with Runan

Narron (ナロン Naron) is a playable character from TearRing Saga: Utna Heroes Saga. He is a young knight in service to Count Merlon of Verge. He is inexperienced, but unknowingly possesses a large amount of potential. He wishes to be helpful to his superiors and appears to have low self-confidence. His reason for becoming a knight is that his sickly mother wants him to be like his father, whom he has never seen and knows very little about.

Narron is a fairly average character when you can first recruit him before Map 2. However, his advantages begin to quickly show as he has immediate access to Elite and promotes into one of the best classes in the game, the Gold Knight. His promotion gains are excellent, and he can quickly grow into one of the best characters in the game, provided you can train him so he can promote early (which is not that difficult due to Elite). He is an excellent choice from the initial four possible recruits at Verge. It is recommended to promote him as soon as possible, since the useful Blazing Wind skill is accessible only if he promotes before level 12. In the later chapters of the game, many of which are indoors, he will struggle due to being forced to use swords, having his Movement lowered to 5, and suffering from rather large stat penalties. In conclusion, Narron is an extremely powerful and useful unit, and his merits warrant him a spot as one of the best characters in the game. 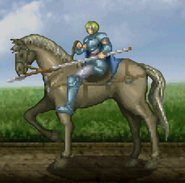 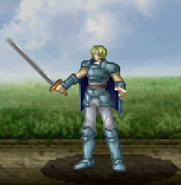 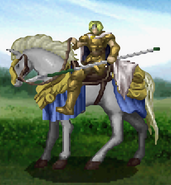