Nasir is later revealed to be a double agent, working both as a spy for Gallia and Daein. After successfully gaining Mist's trust, he betrays her by stealing Lehran's Medallion from her and delivering it to the King of Daein. When Nasir later appears before the siblings again, Mist readily forgives him for his actions, giving him barely any time to explain himself.

As the game nears its conclusion, Nasir is revealed to be a White Dragon, and is the grandfather of Ena. His main purpose for betraying Ike's trust is thereafter revealed, where he merely tries to reunite Ena with her spouse.

On the surface, Nasir portrays himself as a rather jaded and aloof individual, but is, in actuality, compassionate. Unlike most of the other laguz characters encountered by the Greil Mercenaries at the beginning of their journey, Nasir does not appear to harbor any prejudice towards the beorc race. He even admits to having chosen to live amongst them, in hopes of one day seeing the barrier between the two races dissolved. Nasir also reveals that he has had his appearance and habits altered in order to assimilate within the company of the beorc.

Nasir also deeply treasures kinship ties, as can be observed through his relationship with Ena. This has resulted in him carrying out several dastardly tasks on her behalf, such as that of betraying the trust the Gallians and the Greil mercenaries have developed in him.

Kurthnaga: Nasir! You must talk to my father! Convince him to stand down!
Nasir: .. We have committed two crimes. We ignored the will of our king, and in so doing let war rise once more. We must atone for our sins.
Kurthnaga: ... I am willing to accept my own punishment. But is it right that the innocent--women and children who have never lifted a weapon--are also turned to stone?
Nasir: You can't change my mind. I have made a solemn vow that I will never again betray my king.

Nasir is a common Arabic name, which hereby means 'abettor'. It is derived from 'Nasr' (Victory), with 'Nasir' being 'he who supports one to victory'. 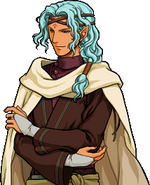 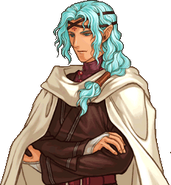 Nasir's battle model as a transformed White Dragon in Path of Radiance".