Maureen Price
[view]
“When I see an injured person, I must help. I seldom think of the consequences to myself. ”
—Natasha in her A support with Seth

Natasha is a playable character from Fire Emblem: The Sacred Stones. She is a cleric from the Grado Empire.

Natasha is a cleric from Grado. She is forced to flee from her homeland because her master, a very well-respected and loved priest (possibly Father McGregor), discovered the empire's plan to destroy the Sacred Stones and was killed for it. However, he managed to entrust Natasha with the secret while he was dying.

She attempts to avoid being seen after her departure, but is eventually discovered when she reaches Serafew city. After failing to convince Grado's soldiers that she is not a traitor, she immediately seeks Eirika's help in making the secret plan known to other countries. Either Natasha or Eirika also can recruit Joshua, a myrmidon hired to assassinate her, whom she encountered near the local arena, to Eirika's cause. After that, she joins Eirka's army and fight alongside them to liberate Grado and defeat the demon King.

If Natasha dies in her recruitment chapter, a worried Seth and Eirika stand beside her and comfort her in the last moment, hearing her final words, managing to understand the message she wants to pass about the sacred stones.

Natasha's ending depends on her supports. If she reaches A support with the knight Seth, she will marry him, move on to Renais and have a life of happiness while they focus on reconstructing the lands destroyed by war. If she marries Joshua instead, she will marry him and become queen of Jehanna. If she doesn't A support any of them, she returns to Grado and helps to rebuild the empire.

Natasha is a graceful, gentle, loyal, and serious woman. Her ability to heal is not only limited to curing the body, but also the mind and soul of those who seek her help. She is selfless and puts her own life in danger to help others, as she believes that it's her calling. Her predisposition of racing into any situation to rescue others, can result in recklessness on her part.

After discovering the corrupted reason for Grado's sudden invasion of Renais, she is the first person to betray her country, despite the immense danger to her life. Despite this, she is very humble and quickly claims that she does not deserve praise whenever she receives it. In her romances with either Seth or Joshua, Natasha is rather doubtful of making a decision on their proposals. She is unsure if she should leave her homeland and quit the Grado priesthood, but chooses to accept her new options anyway, as she had nothing to lose, seeing as she was already branded a traitor.

Natasha is also a bit suspicious about dark magic, considering it blasphemous. She blames the mages of Grado that served the empire, of using dark magic to ruin the continent's stability. Her prejudices are deconstructed when she becomes close to Knoll. She also can develop a close bond with Franz, in which he gifts Natasha his deceased mother's comb, and they promise each other to restore peace to all countries.

Overall, Natasha is an effective unit at the class she starts in and the classes she promotes to, making her a pretty typical Cleric. She has great Magic, Resistance, and Luck growths, along with an above-average Speed and a mediocre Skill growth. Unfortunately, she also reaps the downsides of being a stereotypical priest: low base HP, Defense, and Constitution, and bad growth in those stats. Even when promoted, sending her into combat against most physical enemies is a risky move, so try to stick her near the rear (where healers are most of the time anyway) if you are moving her in with your front-liners. Assuming you can keep good formation, she will be a decent combat unit (after promotion) due to her above-average Magic stat (only caps Magic in either promotion near the very end of her levels), and her combination of Spd+Skl+Lck+Light Magic.

Natasha's main weakness is her low staff rank of D. While it can be worked up, it means that staves like Restore and Barrier are not initially available to her; Barrier in particular is critical, as it only requires the presence of a nearby ally to be used, making it optimal for grinding up staff rank. Natasha's inability to use Barrier means that she is restricted to low-level healing staves or map-dependent ones like Torch and Unlock. This means that not only will Natasha gain XP slowly, but it will take her an irritatingly long time to learn Warp.

As a Bishop, she will gain the Slayer skill, which makes her attacks three times more effective against Monsters. In the main story's endgame and in Creature Campaign, this makes great use of her inherently high Magic growth, as you will be likely bringing her to Max level and letting that growth shine through.

She becomes mounted if you choose Valkyrie for her promotion, allowing her movement after some actions (such as trading) in addition to being granted higher Con, but at the price of a lower inherent Light Magic rank and no special skills. She also will get higher Resistance and Skill caps as a Bishop, compared to higher Speed and Defense caps for Valkyrie. There is no truly "optimal" path for promotion, but in general, Bishop is better for combat while Valkyrie is better for utility and mobility.

It is a rare day a player opts for leveling and using both Moulder and Natasha consistently throughout the game, so either one over the other is usually chosen for the standard Priest role. Moulder boasts greater durability and a higher starting Staff rank, which tends to make him preferable as a utility character. On the other hand, Natasha as a Bishop will outstrip Moulder in combat due to her better Magic.

Sacred Healer
A gentle cleric from Grado, and a woman of beauty and grace. Appears in Fire Emblem: The Sacred Stones.

“My Fate is irrelevant...The world must have...Light.”
—Natasha's normal death quote
“I can't let myself die here... Someone has to hear my tale...”
—Natasha's Chapter 5 death quote

Natasha, Sacred Healer (癒しの聖女 Iyashi no Seijo lit. Holy Woman of Healing)
"Once the war was over, Natasha returned to Grado to help rebuild the empire. She dedicated herself to easing the grief of those families that lost soldiers during the war."

A Support with Joshua
"When Joshua returned to Jehanna, he took Natasha as his bride and claimed the throne as its rightful heir. Natasha was the perfect companion, and together, they carried the mighty desert nation to great glory."

A Support with Seth
"Natasha returned to Renais with Seth, where the two were wed. The reconstruction of Renais kept them busy, but when all the work was done, they settled down to live their days in peace and happiness."

Natasha is illustrated in the trading card game Fire Emblem Cipher with the following cards: 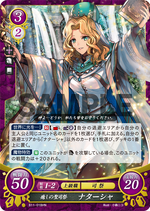 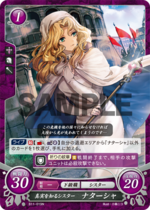 Natasha (Наташа) is a feminine given name that originated as a diminutive of Natalya (Наталья), the Russian variant of Natalie, which comes from the Latin word natale, meaning "birth".