Chapter 3: A Brush in the Teeth (Shadow Dragon and the Blade of Light)

Chapter 7: The Scarlet Swordsman (Mystery of the Emblem)
Chapter 3: The Next Generation (TMS♯FE)

[view]
“...Nay, I'll turn no blade of mine on a woman. If you're willing to pay for my services with your life, then consider yourself the high bidder. My sword is yours.”
—Navarre, when Caeda asks him to join Marth's cause in Shadow Dragon.

Navarre (Nabaaru in Super Smash Bros. Brawl, and Navarl in the anime) is a character from the Archanea Series of Fire Emblem. A stoic mercenary who is also known by the alias "Crimson Fencer", Navarre is infamous for the dual-wielding fighting style that he employs with the eastern Killing Edge, alongside his inclination to work with bandits for unknown reasons.

Navarre appears as a Sticker in Super Smash Bros. Brawl.

A mercenary who is in his mid-twenties during the course of Shadow Dragon and the Blade of Light and Mystery of the Emblem, Navarre constantly travels around the continent of Archanea in search of an unnamed person. According to the designer's notes released for Mystery of the Emblem, this furtive search of his could possibly account for his inclination to remain silent when regarding young women in danger.

Shortly after the palace of Archanea falls to Dolhr, Navarre, while strolling through the streets of the palace town in Episode 3, stumbles upon Lena harassed by a lecherous bandit. After succeeding in chasing off the bandit by threatening him, Navarre turns to depart after quietly urging Lena to take care of herself. He is, however, halted by Lena, who persuades him to aid her and Rickard in their quest to raid the palace and obtain its riches for the sake of easing the suffering of the poor. Moved by her words, he agrees to lend his blade to her cause.

Rickard later returns with Castor, an injured Hunter whom he had earlier saved, in tow. After being briefly introduced to the two, Navarre warns them of his low tolerance for liars, threatening to slice off their tongues if he deems them guilty. The group of four then proceeds to rendezvous in a local inn, where they discuss the details of their plan to break into the palace.

The plan is executed the next morning, and while in the midst of looting the palace, the group chances upon Dice and Malice, a father-daughter treasure hunter pair who agree to aid them in exchange for a share of their spoils. As the group attempts to sneak back out of the palace, they are intercepted by General Camus. Princess Nyna of Archanea intercepts Camus in the nick of time, where she persuades him to grant Lena and her allies reprieve, just as he had done for her when he led the invasion of Archanea Palace in Episode 1. After formally granting the group permission to keep the looted treasures and distribute them to the needy, Nyna then urges Camus to lead the group to safety. Shortly after he is freed, Navarre silently departs from the group, later lending his elite services to the Soothsires.

Navarre makes his debut in Chapter 3 of Shadow Dragon and the Blade of Light, where he is assigned the task of chasing after Julian and Lena after they escape from the Soothsire stronghold located within the domains of the Samsooth Mountains. While in the midst of carrying out his mission, Navarre is interrupted by Caeda, who pleads with him to either defect to Marth's army or turn his blade against her. Due to his personal conviction to not harm women or children whom he encounters, he relents and agrees to aid Caeda's cause. He then helps Marth to bring the War of Shadows to an end, before vanishing without a trace. It is said that many impostors emerge in the wake of the war, attempting to profit from Navarre's reputation.

Some time after the conclusion of the war, upon learning that Caeda is engaged to Marth, several Talysian clans rise up in revolt, embroiling the country in a civil war. The events of Downloadable Episode 3 of New Mystery of the Emblem are then incited, where Navarre, desiring to settle a score with Ogma, allies himself with a group of bandits. In the midst of dueling with Ogma, Navarre is once again interrupted by Caeda, who swoops into the scene and puts an end to the fight, thereafter persuading him to aid her in her cause of defeating the bandits in the immediate vicinity. Upholding his policy of not harming women and children yet again, Navarre relents, muttering that neither he nor Ogma is capable of turning her down. After the battle concludes, Navarre vanishes without saying a word to his comrades.

Navarre returns in Chapter 7 of Book 2 of Mystery of the Emblem, where it is apparent that he has once again resorted to banditry, this time lending his blade to Dahl's band of thieves, who are responsible for looting the Fane of Raman. Upon encountering the dancer Phina, however, he quickly decides to betray them, assuming the role of her bodyguard. Marth's army soon catches up with the pair, and Navarre will enlist in its ranks once again, helping it to end the War of Heroes. He vanishes thereafter, and against his wishes, Phina makes the decision to tag along.

Cold, calm and aloof, Navarre is depicted as the stereotypical lone wolf, where he has the tendency to work alone and entirely out of his own personal motivations. He has described himself as a killer, only utilizing his skills to improve his fighting abilities and is constantly seeking out stronger swordsmen on his quest for power. Thus he is not bound to any nation or cause except to the ones who will give him the biggest pay or will offer him the biggest challenge. He has not, however, completely abandoned his humanity, a fact that is evidenced through his resolve to not reign harm upon both women and children and instead seek to protect them. His actions in all the games that he appears in prove as much; In Shadow Dragon and the Blade of Light, he defects to Marth's army on Caeda's behest due to not wanting to harm her; in Book 2 of Mystery of the Emblem, he defects from Dahl's thief band to protect Phina; in Archanea Saga, he protects Lena from a bandit and lends his blade to her cause. In the end, Navarre does not fight for personal glory, merely to hone his skill with the blade, but will fight for what is right in situations.

Navarre is not one to display his emotions very readily, as his interactions with various characters prove; his speech is one that comprises of one-liners and short phrases, distinctly failing to betray any feelings that he may be experiencing when conversing with others. His base conversations with Phina in New Mystery of the Emblem, for one, sees him repeatedly rejecting her advances, using harsh, firm words in an attempt to dissuade her from continuing to hound him.

Navarre is not completely devoid of the ability to express his emotions, however; through his base conversations with Kris in New Mystery of the Emblem, for instance, while he does start out being rather inhospitable to them, he eventually relents and chuckles in response to their earnestness in attempting to convince him to walk the path of honesty. Yet another instance illustrating this takes place in Episode 3 of Archanea Saga, where Rickard teases Navarre by establishing that he has a soft spot for women with pleasing countenances, to which Navarre, visibly flustered, stutters in response.

Although Navarre usually has a fair bit of advantage in terms of his high Speed and HP, his poor Defense growth can make him somewhat fragile. His high Skill allows him to attack with superb accuracy and inflict frequent critical hits, and this is only amplified by his Speed, which often enables him to attack twice. It is also a good idea to let Navarre retain the Killing Edge that he comes equipped with at the beginning of the games that he appears in, as he tends to make good use of it.

Giving Navarre a Seraph Robe will speed up his level ups, as he will now be able to kill more enemies without dying (this holds especially true if the arena is utilized). His Strength and Defense will remain consistently low, but his HP will begin to grow very quickly. He can reach close to his HP cap before level 20, as well as capping Speed and Skill. While his critical hit percentage will not rise as much as it does for Swordmasters in other titles in the series, the ready availability of Killing Edges after the mid-game point offsets this, allowing him to deal frequent critical strikes, which will almost always defeat his enemies.

Scarlet Sword
Skilled fighter known as the Scarlet Sword. Prefers his blade to do the talking. Appears in Fire Emblem: Mystery of the Emblem.

Caeda: Navarre! Since when does a swordsman of your caliber fall in with thieves and cutthroats?
Navarre: What? Who are you? Fly away, girl, before someone decides to swat you.
Caeda: Please, Navarre. Why fight for nothing when you can fight for something? Leave this rabble. Lend your sword to our cause. Or, if you will not, then turn it on me now instead.
Navarre: ...Nay, I'll turn no blade of mine on a woman. If you're willing to pay for my services with your life, then consider yourself the high bidder. My sword is yours.

“Look at my hands. Look! These hands are stained with death; what's one more murder when you've committed so many? Hmph. There's no turning back for me now. Not even your 'God' can save my soul, priestess.”
—To Lena, after killing a Soothsire thief.

Mysterious Swordsman
He ignored the expectations of others and left like the wind.

Scarlet Swordman
He ignored the hopes of others, and once again left like the wind.

Silent Sword
Navarre vanished after the great struggle, but for years, impostors appeared, hoping to profit from his reputation the world round.

Scarlet Sword
Ignoring the expectations of others, Navarre disappeared like the wind once more.

Some light on Navarre's past is shed in the anime adaptation. A scene featuring him tormented by a nightmare that sees a woman being killed is enacted in Episode 2. It is highly likely that Navarre's policy on not killing women and children stems from this memory. Throughout the anime adaptation, Navarre appears to display few to no emotions.

In Volume 8 of the manga adaptation, it is revealed that Navarre was orphaned when he was a child, later becoming a swordsman after the church master who raised him was killed by bandits. Navarre would come to avenge this church master by personally slaying the bandits responsible for his death in return.

Navarre appears as a playable Mirage and is the Mirage partner of Yashiro Tsurugi. He’s lost his memories and doesn’t speak a whole lot. A swordsman, he looks for a stoic strength in his partner, which ties him to Tsurugi. He’s proud of his sword skills and is able transform into a blade for Tsurugi to wield.

Navarre is illustrated in the trading card game Fire Emblem Cipher with the following cards: 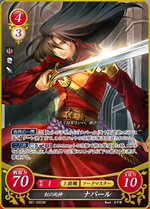 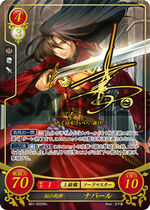 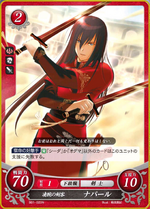 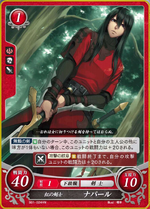 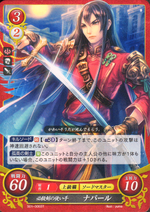 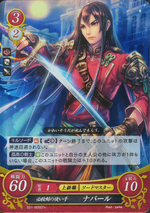 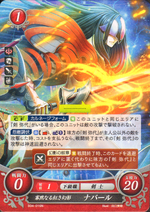 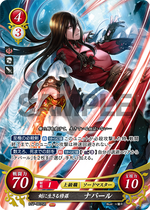 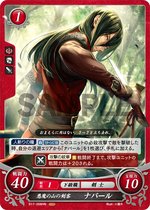 The name "Navarre" is derived from the name of the Biblical character Nabal, meaning "foolish", "senseless", or figuratively "shamelessly improprietous." Nabal was the Calebite who was executed by God for defying King David.

Navarre is an autonomous community in Spain. Also, Naverre sounds similar to Javert, an antagonist in Victor Hugo's novel "Les Miserables", possibly referencing his relationship with Ogma, who might pursue him because he is a criminal.