Raven (Radiant Dawn)
[view]
“Fear not, my lady. This senile old bird would gladly trade his life for your protection.”
— Nealuchi to Leanne.

Nealuchi is a non-playable character from Fire Emblem: Path of Radiance and a playable character in Fire Emblem: Radiant Dawn. An elderly raven chamberlain and advisor to Naesala, Nealuchi fights to defeat Duke Ludveck's rebellion in Crimea. He is assigned to guard the Serenes Princess, Leanne, on behalf of his King and Prince Reyson. He is very fond of the heron siblings. He calls Naesala "nestling" (much to the latter's chagrin), as he was the raven king's caretaker when he was a child. After the game's end, when the bird tribes are united into one nation, he works to cleanse the severely-damaged reputation of the raven clan.

Nealuchi is an interesting unit. In 2-P, he starts off transformed and is by far the best combat unit, barring Haar, who comes in too late to contribute much. In 2-2, he has to worry about his transformation gauge and has no vision in the fog, but his actual combat performance is still top notch and using him is definitely recommended. In 2-E, he is outclassed by Haar and Elincia with the Amiti, and many enemies deal effective enemies against him. Still, he can deal decent damage, fly over terrain, and doesn't take much damage from most of the enemies, although the player has to ensure that his gauge doesn't run out when facing many enemies in one turn. Sadly, when Nealuchi returns in Part 4, he isn't nearly as good as he was before, as his strength is too low to deal meaningful damage to most enemies, and it's very unlikely that he has reached S-rank Strikes by this point. Still, he doubles basically everything, his durability is decent, and he flies, so he could work as a filler unit. He should be part of the Silver Army, as his flying is most useful in 4-3, and he shares bond supports with Leanne and Naesala, who are forced into the Silver Army. It's also quite easy for him to build a support with Leanne. In the Tower of Guidance, Nealuchi's performance is laughable without ridiculous amounts of investment, so he should never be part of the team that enters the tower. However, until then, he has served his purpose well.

Nealuchi: No, this won't do at all! If we fall, who will take care of the nestling? I hate it, but I have to pull back!

Nealuchi: I've...lived a long life... I think about the decades that I watched over the nestling... It makes me feel so fulfilled. Ahh... I had so much fun...

Despite his age, Nealuchi worked hard to restore the name of the raven clan. Every year he set a new age record. 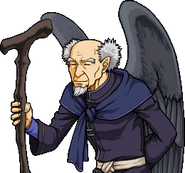 Nealuchi's portrait in Path of Radiance. 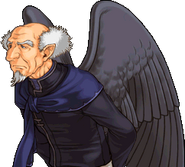 Nealuchi's battle model as an untransformed Raven in Radiant Dawn. 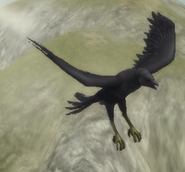