Archer
[view]
“I'm starting to wonder if I really should be here...”
—Neimi's Final Chapter Quote in The Sacred Stones

Neimi is a playable character from Fire Emblem: The Sacred Stones. She is a young girl from Renais, and a childhood friend of Colm, whom she brought into Eirika's group.

Neimi and Colm grew up together in the village of Lark. She was trained by her grandfather, the legendary Zethla, the "single-arrow legend". Whenever Zethla went hunting, he only carried a single arrow with him, yet never missed his hunting target. Neimi's deceased mother was a high-ranked cleric who left the clergy to get married; Neimi's most prized possession is a mirror that belonged to her mother.

Colm always defended her in front of bullies and protected her constantly, a habit he still practices. Colm is blunt and sometimes downright rude to Neimi, though his snide attitude crumbles when he sees her cry. They each have somewhat of a crush on each other, revealed in supports with other characters. Neimi says when Amelia asks her if there is a boy she likes, that "He's someone who's always watched over me, stood by my side. He used to make me cry, but I...I love him."

Neimi is mild, sweet and very sensitive. She is a crybaby, and gets tearful for the most banal things. Neimi tends to apologize for the slightest reasons, she always blames herself by thinking that she did the wrong thing. She is humble and insecure, if she is a combatent in the final battle against Fomortiis, she wonders confunsingly if she should be in this important event. She is not really sure how she got involved in the war as she doesn't have strong will and convictions, but she decided to help the cause even so.

Despite her lack of coping skills, she is actually a great archer with excelent shot. She holds her grandfather ,that trained her, in high regards. She also has a love for animals and used to have a fox as a pet, and wishes to take more animals to raise when the war is over.

She has a childhood crush on Colm, but his harsh demeanor always makes her cry. It is unknown why he is so harsh with her most of the time, though it is implied that he is trying to train her out of her hyper-sensitivity.

*18 in the Japanese version

Neimi has good availability but has to deal with her horrible bases, as well as being locked to 5 movement until she promotes. But the biggest downfall of Neimi is her weapon type, bows. She can only attack from 2 range, meaning she's likely to only kill 1 enemy per turn. It doesn't help that she can't counter at 1 range, meaning that enemies that attack Neimi are enemies that a unit with 1 range could've killed. However, this is easy to play around and will be fixed by her promotion. Players will have to consider if her potential ability is worth the effort needed to raise her, as many other units can accomplish the game objectives without needing nearly as many resources. The saving grace that she has is that the chapter 6 Orion bolt is only usable by her so she faces no competition for promotion items. The choice between promoting Neimi into either a Ranger or a Sniper is a fairly one sided one. Despite gaining nearly identical stat bonuses, Rangers also gain the ability to use D swords, a mount, and higher movement, which Snipers do not possess. Ballista do not appear often as well and due to a combination of Neimi's high accuracy and the low avoid of most enemies Sure Strike is unlikely to be of use if it does activate.

“You were right, Colm... I am a klutz. Sorry...”
—Neimi's death quote in The Sacred Stones

“I'm sure I can help if you'll let me... I'll keep myself safe.”
—Neimi speaking to Eirika in Chapter 7

Neimi, the Tearful Archer (泣き撃ち Naki uchi)
"She returned to her village and passed her days in peace and quiet. Years later, she traveled to the capital of Renais as an archery instructor for their military. She never could resist a good cry."

A Support with Colm
"The childhood friends became lovers first, then husband and wife. Worried for Neimi's well-being, Colm gave up his adventurer's ways. Neimi passed on her grandfather's skill in archery to her own son and daughter."

Neimi is illustrated in the trading card game Fire Emblem Cipher with the following cards: 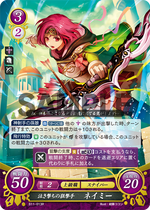 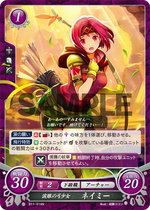 Neimi's portrait in The Sacred Stones

Neimi as a Ranger with a bow