A former Valmese general, Nelson deserted the army and began serving the Grimleal while acting as a bandit leader. He and his men set up a hideout and began terrorizing the local villages, stealing all of their treasures. During one of these heists, he managed to blackmail Severa into working for him by stealing the wedding ring she had carried while she was sleeping, which reminded her of her parents. Nelson was also prone to hiring others to help him in return for payment, as shown with Holland.

Chrom and his army, who were passing by, overheard several villagers contemplating their actions as they did not want to resist against a Valmese general. Upon hearing of their plight, they set out to the fortress where Nelson and his men are encamped. Nelson is surprised to hear that Chrom is coming towards him, but in his delusions of grandeur, realizes that if he takes the Fire Emblem, he would essentially be the new king of Ylisse. In the ensuing battle, he is slain by Chrom and his army. The treasures he stolen are also returned to their rightful owners.

“What are those useless fools doing?! Get them! Somebody get them!”
—Nelson's pre-battle quote 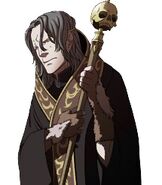 A Soldier and Nelson