Jamieson Price
[view]
“Seiros! I will kill you! Do not get in my way! All those who stand in my way... will be destroyed!”
—Nemesis

Nemesis is the overarching antagonist of Fire Emblem: Three Houses.

Nemesis was the leader of an army that opposed Seiros during the War of Heroes that included the Ten Elites. He possessed the Crest of Flames and wielded the Sword of the Creator. In Imperial Year 91, the armies of Nemesis and Seiros clashed at the Tailtean Plains. There, Nemesis was confronted and slain by Seiros in single-combat.

Many years after Nemesis died at Tailtean, the newly appointed professor of the Officers Academy, Byleth, is tasked with subduing thieves in the Holy Mausoleum during the Goddess' Rite of Rebirth. The leader of the thieves opens the coffin of Seiros, and removed the Sword of the Creator from it. The thief attempts to use the sword to defend themselves against Byleth, however, Byleth is not only able to easily overpower the thief but also awakens the sword's power, despite the missing Crest Stone.

The next day, Archbishop Rhea thanks them for dealing with the thieves and protecting the Sword of the Creator, and in reward entrusts Byleth with the sword. Surprised by her decision, Seteth warns Rhea to reconsider, as if someone like Nemesis were to appear again, Fódlan would be consumed by war. Unaware of the history of Nemesis, Byleth asks the two about him.

Seteth and Rhea explain to Byleth that when Fódlan was attacked by wicked gods, the Goddess gifted Nemesis with the Sword of the Creator, and he used its power to save Fódlan, earning the title of the King of Liberation. However, over time, his power corrupted him and he waged war across the land, forcing Seiros to put him down. Rhea trusts that Byleth will not be corrupted like Nemesis and leaves the sword to them. Shortly afterward, Byleth meets with their colleague Hanneman who reveals to them that they are in fact the descendant of Nemesis and inherited the Crest of Flames from him, hence being able to wield of the Sword of the Creator.

Seiros proclaims Nemesis was never anything more than the leader of a group of bandits who were influenced by the people of Agartha to break into the Holy Tomb and plunder the body of Sothis. The Agarthans then used the blood of Sothis to give Nemesis the Crest of Flames, her bones to make the Sword of the Creator, and her heart to make the Crest Stone. At the Agarthans' command, he would then travel to Zanado and massacre the Children of the Goddess with the sword. The other bandits in Nemesis' group consumed the blood of the fallen Children of the Goddess to gain their Crests; their weapons, the Heroes' Relics, were fashioned from the bones. With the exception of Maurice, those bandits became the Ten Elites of Fódlan legend. Additionally, it is unknown if Nemesis ever had any descendants and nothing denote he and Byleth being related by lineage, as Byleth's Crest of Flames manifested as a result of Rhea implanting the Crest Stone of Flames into Byleth's heart in an attempt to save their life.

In the underground library beneath Garreg Mach, additional details are provided about Nemesis. Notably, it was shown that, after he slaughtered the Nabeteans and gained the Sword of the Creator, he was made (possibly by himself) king of all of Northern Fódlan. He gained leadership over various clans by offering them greater power - the Hero's Relics - and is implied that these leaders became his Elites when they accepted his offer. It's also shown that he never told at least some of the Elites where the Hero's Relics had come from or what he had done to get them, leaving them at a loss as to why Seiros despised them so much, and regretting that they had allied with Nemesis as while their family and followers were assured safety, they themselves were hunted relentlessly when the tides of war turned after the death of Nemesis.

Before departing to Derdriu, Edelgard reveals to Byleth that Nemesis was never corrupted and that Seiros manipulated the people of Fódlan to wage war against Nemesis. This knowledge was passed down from emperor to emperor, as the first emperor was an ally of Seiros during the War of Heroes. She also claims the war was fought over what type of being should rule Fódlan, unaware Seiros' motivations were far more personal and that Nemesis was motivated by his own ambition for power.

After the destruction of Shambhala, Nemesis is resurrected by Those Who Slither in the Dark (thanks to the Crest of Flames) and raises an ancient army to fight Seiros once more, accompanied by the remaining Agarthans from Shambhala, slaughtering all in his path as they march towards Garreg Mach. As Shambhala is in Goneril and Gloucester, they are intercepted by Duke Goneril's army, but they easily rout his forces and severely injure him in battle, prompting Count Gloucester to flee upon hearing of Duke Goneril's defeat. Due to Duke Goneril's army stalling Nemesis, the Alliance Army is able to intercept Nemesis's army at the Caledonian Plateau. There, Byleth and Claude fight him head on. He condescends Claude and Byleth for not being able to fight him in single combat, injuring the former after he fires at arrow at him. Byleth then intercepts him; both charge at each other, but the arrow Claude shot earlier pierces his arm, allowing Byleth to kill him, and the remainder of his army dissipates with his death.

Nemesis was a proud and ruthless warrior who was manipulated by Those Who Slither in the Dark. In the intro cinematic that shows his fight against Seiros, he is shown to be serious and calm throughout the battle, except when Seiros indirectly reveals that she's a survivor of the Nabatean massacre, which shocks him. Regardless of how he was influenced, he appears to have no regrets over the massacre of the Nabateans. He is proud of his strength and has a warrior's honor; he condescended Claude and Byleth for not being strong enough to challenge him in single combat. He was apparently unaware of Seiros' identity as a survivor of the Red Canyon until moments before his demise, when she asked if he recalled the massacre as she stabbed him to death. Exacting vengeance on Seiros is his lone fixation once he is resurrected, to the point about raving that he'll destroy anyone that crosses his bloody path against her.
"End of spoilers. It's a pleasure doing business with you!"

King of Liberation
A king who faced Seiros in mortal combat long ago, commanding the Ten Elites and wielding the Sword of the Creator. Appears in Fire Emblem: Three Houses.

The King of Liberation joins Fire Emblem Heroes as a slow, bulky red infantry sword fighter with an interesting Prf weapon in the Dark Creator S. In addition to its 16 Mt and +3 Def, it offers boosts for each ally that is near full HP, evoking the Mighty King of Legend ability from the base game. For each ally (up to 3) that is at or above 90% HP, Nemesis gains bonus +2 Atk and Def during combat (up to +6 to each), and in his first combat each phase, 15% damage reduction from enemy attacks, up to 45%; this is a slightly greater value than the lauded Speed-based damage reduction skills offer. This combination of bonuses means Nemesis wants to keep his allies in perfect condition while fighting only one enemy each turn if possible, so using support-style allies with long-range buff and debuff effects like Chills and Ploys makes good use of his strengths. Dragon Fang is a strong special that scales off of his immense base Atk. Chill Atk 3 helps mitigate the damage Nemesis takes even further. Savage Blow does not make a vast wealth of sense on Nemesis, as he prefers his enemies spaced-out so that he can pick them off one by one, but if his enemies do cluster up he can distribute true damage to soften them.

With his base kit, Nemesis lacks Distant Counter, meaning he can be safely whittled down by magic attacks. Ganging up on him invalidates his damage mitigation, so have a weaker attacker that can't be counter attacked initiate, and then a stronger attacker finish him off. Without the boosts from his Dark Creator S, he doesn't have much else worth mentioning, so target his allies first and he will be left an unremarkable, slow red unit. Additionally, the Twin Blades and Deadeye Specials ignore his damage reduction entirely, so Altina and Shinon have very little to fear from the Fell King.

Nemesis benefits greatly from Skill Inheritance; his stats are excellent, but virtually every part of his kit can be replaced, up to and including his Prf. For all its benefits, his Dark Creator S becomes relatively useless if his allies fall or are even damaged enough before him. Duma's Upheaval is enough on its own to turn off all of its boosts. That said, there are still viable builds to make use of it. Distant Counter is very good for Nemesis, as he is more suited to enemy phase walling than player phase attacking. As an infantry unit, he can also utilize Null C Disrupt 3 to counterattack Dazzling Staff 3, Windsweep 3, and Firesweep users, among others. Quick Riposte 3 also makes for a good B skill or Sacred Seal to let him perform follow-ups despite his pitiful Spd. The C slot is, as usual, flexible; Rouse skills are well suited to him for his solo-fighter style. For Assists, Reposition is always reliable, and Smite is good for getting an ally to safety far away from Nemesis. His Atk is high enough that he can afford a Special that does not directly boost damage, such as Noontime or Sol, and his bulk is good enough that he will trade a lot of hits with his opponents, so he makes good use of Aether. A combination of Noontime, Wrath, and either Time's Pulse or Slaying Edge+ let Nemesis fire off huge damage Specials every combat that keep his health high enough for Quick Riposte.

Nemesis is illustrated in the trading card game Fire Emblem Cipher with the following cards: 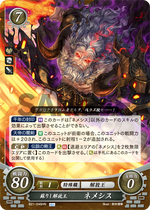 Nemesis is the ancient Greek goddess of vengeance, who enacts retribution against those who display arrogance before the gods. Another name for her is Adrasteia (or Adrestia), meaning "the inescapable."