Julie Ann Taylor
[view]
“Queen Elincia, Crimea needs you more than anything, and I reckon you could use my help.”
—Nephenee when she is prepared to help Elincia at Fort Alpea.

Nephenee (Nephenie in the French version) is a playable character from Fire Emblem: Path of Radiance and Fire Emblem: Radiant Dawn. She is the oldest daughter of a large family from the village of Ohma, and has triplet brothers and two sisters.

After being captured by Daein soldiers and held as a captive in a prison camp at Castle Canteus alongside Kieran, Brom, and Sephiran, Nephenee is rescued by Ike and the Greil Mercenaries. She expresses her gratitude by joining their ranks.

Nephenee remains in Ike's army until the game reaches its conclusion before returning to her home in the countryside, where she lives a peaceful life for several years.

Once again, Nephenee is forced to take up arms alongside Brom when the two of them work to quell a local rebellion against Queen Elincia that is instigated by Ludveck's subordinate, Yeardley, who had incited the young men of the village. Afterwards, they pay a visit to the royal palace in Melior to alert Elincia about the rebel uprising taking place within Crimea.

Along with Brom, Nephenee later joins the Laguz Alliance in Part 3 and aids her old allies from the previous war. When Ashera casts her judgment upon Tellius, Nephenee is one of the many characters spared from the resulting petrification and therefore is a possible candidate to be brought into the Tower of Guidance.

After Ashera is defeated, Nephenee returns to her family in Melior and frequently participates in battles when the need arises.

Nephenee appears to be a capable and beautiful soldier, with many of her comrades making statements in regards to her likable traits. At her start in Path of Radiance however, she has deep shame about being a simple country girl and takes steps to hide herself, especially when it comes to her manner of countryside speech. Ike, having essentially no judgments based on backgrounds whatsoever, hears her accent in a Base Conversation and merely asks if she can fight. She mentions her speech, but Ike immediately welcomes her to the bulk of the fighting force, taking only her strengths into consideration.

Despite these kinds of interactions, she suffers from low self-esteem; often putting herself down and lacking the confidence to speak amiably with the other characters except for fellow country dwellers like her hometown resident Brom. This is evident in the support conversations she shares with Calill, where she expresses immense embarrassment at being told to remove her helmet, claiming that doing so will incite the reproachful stares of everyone around her. Calill herself had a similar upbringing, but has since gained confidence and flaunts her beauty, hoping the same for Nephenee, whereas fellow villager Brom doesn't even see why she feels the need to hide whatsoever.

In Radiant Dawn, she appears to have gained a good deal of confidence. She calls out Yeardley and his movement, quick to defend Elincia's character. Her appearance and behavior reflect her strengths and there are few signs that she still clings to the same shame as before.

* Only if Lance Mastery Level is at D or lower.

Nephenee joins in Chapter 11, and while her base stats are not terrible, they are certainly nothing to write home about. Not only that, but she also joins with a pitiful E rank in lances, making her incapable of using anything more powerful than a forged Iron Lance. This, combined with her relatively poor base strength, give her a very lackluster offensive start. What's more, she joins just after Marcia, at the same time as Kieran, and just before Jill, all of whom are better than her and are usually better recipients of the experience Nephenee would require. If the player does decide to invest in her, it is recommended that they give her an Arms Scroll, which is only realistically contested by Mist once she promotes into a Valkyrie, and perhaps even the Chapter 13 energy drop to overcome her poor attack. If given this favoritism, she can easily turn into a strong unit, thanks to her high Skill and Speed. Assigning her the Vantage skill can make her very deadly with a Killer Lance, always striking first and having high odds of landing a critical hit, though her low HP might hamper this tactic. Nephenee will also be starved for good support bonuses, as her only options are Brom, who is outclassed, and Calill, who joins much later than her.

* Only if Lance Mastery Level is at B.

Nephenee is relatively easier to train in this game, owing to her high availability, starting from Part 2. She has the potential to grow into a powerful unit, with her garbage growths in Strength and Defense being offset by her excellent Skill and Speed growths. Nephenee has the potential to cap Skill, Speed and Resistance way before promotion, making her a good choice for spending Bonus Experience on.

Sincere Dancer
A militia member from the Crimean countryside. Urges her allies onward with the dance steps she's been practicing. Appears in Fire Emblem: Path of Radiance.

"When I get back to the countryside, I'm gonna boast to all my family and friends that I fought under you."

"Nephenee lived with her family in Melior. Time and again she raised her lance in defense of the realm."

Nephenee is illustrated in the trading card game with the following cards: 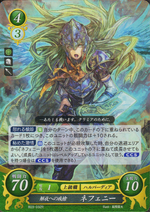 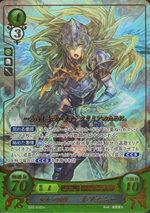 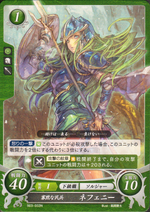 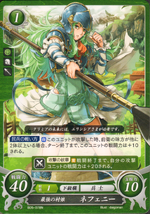 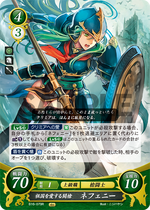 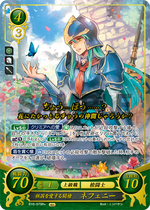 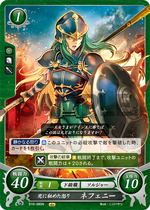 The origin of Nephenee's name is uncertain. It could derive from various South Slavic names like 'Nevena', which come from the word 'marigold'. In medieval Europe, poor Christian peasants offered marigolds to the Virgin Mary if they are unable to afford to offer more expensive gifts or tithes. This name could therefore be a reference to Nephenee possessing great virtue and valor, despite her humble socioeconomic background.

In Greek mythology, 'Nephele' was a nymph woman created by Zeus out of the clouds. He did so in order to trick a mortal named Ixion for lusting after his wife Hera, and therefore created Nephele in her likeness. Ixion then proceeded to rape Nephele instead of Hera, giving Zeus the excuse to banish him to the depths of the underworld. The children from Ixion and Nephele's union were the centaurs.

In the Odyssey, 'Nepenthe' is a mythical drug that is supposedly able to cure grief by causing the user to forget his or her troubles. This drug is also briefly mentioned in the fourteenth stanza of Edgar Allen Poe's hauntingly morose poem "The Raven". In this part of the poem, the persona is observed to plead with the holy Seraphim to relieve his tormented soul from the agonizing grief he has suffered from the death of his implied lover (Lenore), requesting to be given a "quaff" of nepenthe to forget her.