[view]
“I am who I am. The pain of others, I do not feel. The sorrow of others does not touch me. Death feeds me. Death pleases me. I am the essence I consume. You fools will become corpses here, because I wish it to be.”
—Nergal

Nergal is the main antagonist of Fire Emblem: The Blazing Blade, and is the only character in the series who belongs to the Dark Druid class. He wields the strongest Dark magic tome in his specific game, Ereshkigal.

Though a pursuer of knowledge about what can be produced from darkness, Nergal was not always evil. If the player clears several side-quest chapters of Hector's campaign, it is revealed that prior to the events of the game, Nergal was in a relationship with a dragon, Aenir, and became the father of Ninian and Nils, sending them through the Dragon's Gate on Valor to protect them when his wife was kidnapped. Afterward, he turned to dark magic to make himself stronger so he could open the Gate himself and reclaim his children. During his quest, he met Athos in Nabata and they quickly became friends. Equal in knowledge and power, together they discovered the desert village of Arcadia, a place where dragons and humans coexisted peacefully, with both surprised that such a place could exist. Upon invitation from the village leader, they stayed there for hundreds of years learning from the dragons' vast libraries, constructing an oasis for the villagers and hiding the city behind a veil of sandstorms.

However, Nergal's studies eventually took a turn down a darker path when he discovered a magic which could take the life force, or quintessence, of other living creatures and turn it into power. He began experimenting with small creatures, and as he grew more confident he used this same technique on ever more complex animals, eventually taking the life of a human. Athos and the village elders discovered Nergal's secret deeds and urged him to stop, but Nergal would not listen. Athos and the Divine Dragons managed to strike him down, and Nergal was banished from Arcadia. Nergal slowly built up his power again while avoiding the eye of Athos, extending his life span beyond mortal boundaries and creating numerous Morphs to travel the world looking for the quintessence of powerful individuals to give him even greater strength.

A few hundred years after he was banished from Arcadia, Nergal called Ninian and Nils through the Dragon's Gate in order to use them to call more dragons into Elibe, and then harvest their enormous quintessence so that he may become the most powerful being in the world. Along the way, he stirs up war in Lycia by using an assassin group called the Black Fang, which he controls through one of his morphs.

In the last chapter of the game, Nergal uncovers his face from the turban that hides it to reveal a wound along his forehead and a burned right eye, claiming that the person he had thought to be his truest friend, Athos, had inflicted the wound upon him. In his final moments, Nergal draws three dragons from the Dragon's Gate in a final desperate attempt to destroy his foes.

In the past, Nergal sought more knowledge in order to make himself stronger to reclaim his children. However, in reaching that ultimate power he sought, he had forgotten everything about himself over time, as the darkness was able to engulf him completely and he forgot why he even wanted to open the Gate in the first place, only remembering that he needed power and that the Gate must be opened. (In Chapter 19xx, A Glimpse In Time, Teodor states that in order to achieve greater power in dark magic, one must give up more and more of oneself, including memories.)

Help Description: An avaricious fiend who turns death into power.

As a boss, Nergal isn't too difficult and is fairly simple to defeat. On Hector Hard Mode, he has an Attack Speed of 14 factoring the weight of Ereshkigal. This means it only requires and attack speed of 18 to double him, and he can easily be beaten with the use of Aureola or Luna via effective bonus and resistance negation respectively; both of which Athos can use just fine, though he will not quite double without investment from Speedwings or Body Rings. Lucius and Canas respectively are also great candidates for wielding the aforementioned tomes if properly trained before then. He also does not possess a All in all, Nergal is a fairly easy boss that shouldn't be too much trouble as long as there is at least one strong magic user in the party.

“Be prepared. You are to be witness to a power that overwhelms all!”
—Nergal's battle quote

Eliwood: Nergal!
Nergal: So you're here, Eliwood. I thought losing Ninian might distract you. Have you forgotten her so quickly? How heartless.
Eliwood: I haven't forgotten. I'll never forget. It was my mistake that killed Ninian. Because of that... I will fight. I will not run away and hide in sorrow... I'm going to put an end to all this!

Nergal: Did you know, Eliwood? What happened to your friend Hector? What he was thinking as he fought by your side?
Eliwood: ......
Nergal: Heh heh... It's a pity. If only he had been free to return to Ostia.
Eliwood: I know that I've caused much pain for my friends. But that is why... I will not lose here today!!

Nergal: Little girl from Sacae... You'd do well to vanish. One such as you is no match for me.
Lyn: The nomads of the plains do not abandon their fellow tribespeople. Eliwood and Hector are my dear friends... Their sorrow is my sorrow. Their anger is my anger.
Nergal: Pah...
Lyn: Nergal! In my friends' names, I will cut you down!

Renault: ...Nergal, do you remember me?
Nergal: Hah. You are... Renault. So you're still seeking out a wretched existence?
Renault: I went astray. I listened to your honeyed words... I dreamt of the impossible... the return of a lost soul. But...what you gave me was... a puppet... It was soulless...nothing more than an empty vessel!!
Nergal: Just an empty vessel... Isn't that what you wanted? You desired to bring back your dead friend. You were my experiment, and I completed my morph. I'm grateful, Renault. Thanks to you, I gained power.
Renault: You villain... You cursed him! Your crime can never be forgiven! I will end you with my hands. In the name of my lost friend!

Hector: Nergal!
Nergal: So you've come, Hector of Ostia. Your existence itself was my greatest miscalculation. If it had only been Eliwood, this could have been over. So, my little miscalculation, I will erase you. And leave no trace remaining.
Hector: Do your worst!!

Hector: Nergal!
Nergal: I cannot understand you, Hector of Ostia. Why would you do all this for Eliwood? Is this miserable thing called friendship worth dying for?
Hector: I don't expect you to understand. You've forgotten what it means to be human! Nergal! My connection to you… it's over! I'm finishing everything up right here!!

Athos: Nergal...
Nergal: Heh heh... Athos... Take a good look at me! At my tremendous power!
Athos: Already...words are useless. As an old friend... I will fulfill my duty.

Nergal is illustrated in the trading card game Fire Emblem Cipher with the following cards: 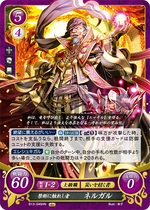 Nergal was the name of the Mesopotamian god of war. According to one myth, Ereshkigal, the goddess of death, tried to reprimand Nergal for ignoring her messengers. He in turn attacked her and would have killed her, but Ereshkigal offered to marry Nergal and make him king consort of death.