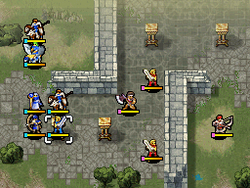 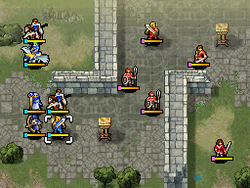 New Companions is Prologue IV of Fire Emblem: New Mystery of the Emblem.

There are two different versions of this chapter depending on the choice made at the conversation at the end of the previous chapter. If the player selected "No", Jeorge will become the chapter boss, while Athena will be fought if "Yes" was selected.

In either variation, this chapter can be be completed (except in Lunatic and Lunatic Reverse) by having units huddle in the upper left area with a sturdy unit to block enemy entry. Ryan can be employed to pick off enemies from the safety of the walls. Wrys should be positioned such that he is out of archer fire but can maintain Ryan and the choke point unit's HP. However, in Lunatic or Lunatic Reverse, if you don't want any character to be defeated, only choose Athena's version, for 2 important reasons:

Either Athena or Gordin (if Jeorge is fought) will join the player after the stage is cleared.