Walden James
[view]
“Heh. Sing like that again, and I might just let my comrade pluck out your tongue.”
—Nichol threatening a Villager to pay a toll.

Nichol is a capturable boss character from Fire Emblem Fates. A knight of Nohr, Nichol leads a group of bandits to terrorize a village.

Nichol appears in Paralogue 5, where he and his band of bandits are introduced in the midst of terrorising a village, taunting a child villager for failing to pay a toll. When the man responds by calling for help, Nichol sadistically threatens to allow one of his comrades to rip out his tongue. Fortunately for the village, Corrin's army, aware of the dire proceedings, arrives in the nick of time to save its inhabitants from certain death. Nichol is eventually defeated in the ensuing battle, either slain or captured by Corrin's forces.

Nichol also appears as a potential visitor in the DLC episode Museum Melee.

Although not much is known about Nichol due to his minor involvement with the plot, several aspects of his character are depicted nevertheless. His help description, for one, describes him as being an apathetic individual despite having an unusually strong will to survive. His pre-battle quote also portrays him as a prideful individual, as he, despite being aware of the odds stacked against him in battle, arrogantly announces his combat superiority before taunting his foe to approach him.

**These skills are innate on Lunatic mode

**These skills are innate on Lunatic difficulty

As a Malig Knight

As a Wyvern Lord

As a prepromoted Malig Knight, Nichol is one of the strongest capturable units in the game. This is particularly true on Lunatic, where his minimum base stats tie or beat nearly all of Camilla's across the board while boasting superior weapon ranks and nearly identical growths. While he doesn't come with skills on Normal or Hard, he will come equipped with skills learned from Wyvern Rider on Lunatic.

Nichol is at his best in Birthright. The large number of Rout and Defeat Boss missions make mobility and access to 1-2 range weapons particularly valuable commodities, both of which Nichol possesses. While Nichol excels as a physical attacker, his magical capabilities should not be overlooked, despite his subpar Magic. He makes excellent use of the Bolt Axe, and can perform well with Tomes with a bit of investment. His high move and moderately high Defense allows him to engage groups of enemies sooner than most other units and survive reliably. For these reasons, Nichol makes a good replacement for Scarlet, although they're at their best when both of them are deployed. Nichol can also be obtained many chapters before recruiting Scarlet since Silas will already be in the party and can marry as soon as the Prison can be built.

Nichol is also a good unit in Conquest. Although the Wyvern Rider class is more easily available, there are still a large number of maps that are made much easier with more than one of them deployed. He can still make a good 1-2 range magical attacker, although he is much more reliant on the Bolt Axe than in Birthright. For this reason, the player may prefer to reclass him to Wyvern Lord to enhance his physical capabilities. While he is a good replacement for Camilla or Beruka if the player is unwilling to use them or they are incapacitated in battle, Nichol is still more than capable of pulling his weight with them deployed, due to the strength of the Wyvern Rider class set.

As a Malig Knight, Nichol's base class set is the Wyvern Rider. His other normal reclassing option is the Wyvern Lord class. Like all other capturable units, he can be reclassed into special classes if so desired.

It's worth noting that if Nichol is recruited early enough, he'll earn experience at a very slow rate due to his very high starting level, although this will gradually correct itself as the game progresses. This means that Nichol will likely be stuck with his base stats for a long period of time. This is more of an issue in Conquest, though Nichol's bases are high enough to function for a long time.

Overall, while not quite as dominant as his fellow Malig Knight Camilla, Nichol is still a great unit, regardless of the route.

“What hope do any of you pathetic fools have against me? But you, friend, have an especially hopeful light in your eyes. Come closer. I'll be glad to extinguish it for you.”
—Nichol's pre-battle quote.
“So hope triumphed in the end? Not cruelty? It seems I backed the wrong horse. Alas, no turning back now...”
—Nichol's death quote
“I fear death above all things.”
—-Unused Nichol quote.

Nichol seems to have originally been a recruitable unit with a larger role, but was scrapped and became a capturable unit instead. There are evidences that may prove that Nichol's role was indeed scrapped. For one, he, along with Candace (another capturable unit that could have been a cut unit as well) are the only two capturable bosses with critical/skill activation cut-in portraits, though they lack quotes for such. Another evidence being his voice clip played when he falls in battle which is said in a manner similar to how allied units are defeated, as well as being the only voice clip of his that plays. Most capturable bosses either have no defeat quotes or use multiple clips when fallen in battle (minus Haitaka and the bandit twins). Not only that, but he has many voice clips that were not used in the final release, with one of them mentioning his fear of death among most things. Additionally, his name is located among the names of male characters that can exclusively marry female Corrin. He also has a blushing graphic that was never used in the final game, which could have been used during his confession with Corrin and other events such as the Hot Spring.

Nacht is the Dutch and German word for night. 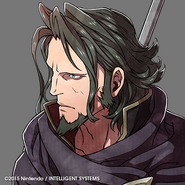 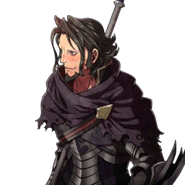