Chapter 18A: The Frozen River (joins in Chapter 19A: Bitter Cold) or

Chapter 19B: Battle in Bulgar (joins in Chapter 20B: The Silver Wolf)

Robin Bell
[view]
“You...pathetic idiot! And you dare show your face in front of me!?”
—Niime talking to Hugh

Niime is a playable character from Fire Emblem: The Binding Blade. She is also known as the Hermit on the Mountain, and is mother to Canas as well as grandmother to Hugh. She previously had a romantic relationship with a very important member of the St. Elimine Church, Yoder.

Niime joins automatically at the start of Chapter 19A or 20B. She wished to travel with Roy to satiate her curiosity regarding dragons from the kingdom of Bern. Niime's knowledge is instrumental to defeat the dragons. She is in search of a dragonstone, that  she shows to Fae. It’s eventually revealed that Niime was planning to use the Power of the Stone for personal and unkown reasons. Though Fae’s sleepy-face made Niime give up her mysterious plan and instead focus her efforts on helping to save the world from the Maiden of darkness.

Niime has done much research on the dragons of the Scouring. She is very knowledgeable on the subject of ancient magic, and wrote at least one book on the subject. She is famous among magic users, with Pent reacting excitedly upon meeting her son and saying that every mage has heard of her. She knows advanced magic, and has the ability to change the weather by controling elements, as it’s seen when she manipulates the Ilia’s snowy weather.

Niime also had a relationship with the Bishop Yoder when they are younger. For unknown reasons, their romance didn't work and Niime married and had children with someone else. They lost contact though the years, but met again when they both joined Roy's army. She was also known for being a beauty when she was young. After the war, she disappeared in the mountains of Ilia.

Niime is a sharp-tongued and sarcastic woman, obsessed with unraveling the mysteries of ancient magic. Through her study of dark magic, she believed dragons to be fearsome, demonic beings with tremendous power. However, through her supports with Fae, she is able to see that some of the old depictions of dragons that she has seen are not entirely true.

Niime attempts to get her grandson and her successor, Hugh, to learn about ancient Magic,  since all of her children followed her steps becoming dark mages. She is very harsh with her grandson and constantly expresses her disappointment on Hugh's choice of Anima magic, a talent Niime claims he inherited from his mother, but admits to care for him.

Meanwhile, in her support conversations with Raigh, she reacts coldly and severely to Raigh's disrespectful demands, but lectures him on dark magic by giving him an ancient book, which Raigh tries with extreme difficulty. With Sophia, Niime shows interest in her based on self-identification.

Description: The Mountain Hermit. Has devoted her life to research and study.

Niime appears weak at base, with a paltry 25 HP and 5 Defense despite an exceptionally high level and the worst growths in the game. However, these appearances bely an exceptionally powerful unit. Niime combines two traits that no other units are likely to share: 21 Magic, and an A-rank in Staves. For comparison, this is on par with what Saul and Elen will have when trained to their absolute max level without early promotion, something almost impossible to achieve without significant stat grinding. While some promoted mages like Lugh, Raigh, or Lilina can match her magic, they only gain E-rank staves upon promotion and will take hundreds of staff uses to catch up. This makes Niime the game's de facto best staff unit upon joining, boasting both the ability to use every staff aside from the Saint's Staff (which is not beyond her to learn) and use them better than any other unit. Her most obvious use is as a Warp-user, teleporting allies up to 15 squares across the map at base level, but she can also use Rescue for the opposite purpose. Physic makes her an excellent long-range healer, and Silence, Sleep, and Berserk are almost guaranteed to succeed against anything barring another promoted magic-user.

Though Niime appears to be a character with little room to grow, she can actually be pushed much further through some investment, mainly due to her class. She is not far off from being able to wield the Apocalypse tome, the most powerful magic attack in the game. Aside from being able to annihilate Manaketes in a single shot, the tome gives a colossal +5 to her Magic when equipped, which is factored into her staff calculations and makes her Warp range even longer and her status even more reliable. Additionally, while Niime's durability is quite bad, it can be pushed further through the use of the Nosferatu tome; due to Niime's high attacking power and accuracy, as long as she is not killed in a single blow, she should be able to heal back the damage. With a single Angelic Robe, only the most impossibly powerful enemies like Manaketes can one-shot her, and with the Body Ring, she is no longer slowed down by Nosferatu, letting her 16 Speed swing with its full weight; in this state, she goes from requiring constant protection to being almost immortal against standard enemies. Lastly, Eclipse, though nigh-useless against standard enemies even in her hands, gives her the odd utility of being able to reduce the unusually durable breakable walls in some chapters to 1 HP.

In all, Niime is almost certain to be the best staff-user in the army upon joining, and with two low-demand items, she can be one of the strongest magic combat units as well. She is a powerful asset, not to be overlooked.

Mountain Hermit
Scholar of dark magic and ancient dragons. Everyone in Elibe who knows anything about magic has learned her name as well. Appears in Fire Emblem: The Binding Blade.

Niime - Hermit on the Mountain
"Niime returned to her secluded home in the mountains and continued her research. Although it is said that she solved many of the mysteries of the world, we can never know for sure because she didn't leave any written records of her work.​"

Niime is illustrated in the trading card game Fire Emblem Cipher with the following cards: 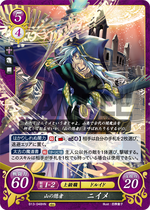 Niime is a variation of Nimue, which is one of the several names for the Lady of the Lake, who gave King Arthur Excalibur and raised Lancelot. Other variants include 'Niniane' and 'Vivian'.