∞
[view]
Niles's Bow (ゼロの虐弓 Zero no Gyakukyū, lit. Zero's Cruel Bow) is a Bow that is introduced in Fire Emblem Fates. Eponymously named after Niles, Niles's Bow, like its Japanese name suggests, reflects the cruel sadism of its namesake, seeking to prolong the suffering of enemy units by leaving enemy units with just 1 HP when it is supposed to perform fatal hits. Left in a hapless position of stark vulnerability, such foes can thus be easily picked off by weaker allies, granting them the opportunity to earn extra experience with ease.

The bow acts as the personal weapon of Niles in the spin-off titles Fire Emblem Warriors and Fire Emblem Heroes. 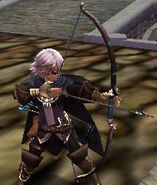 The quiver of Niles's Bow attached to his back. 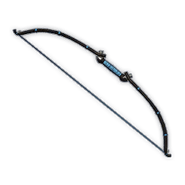