Bard
[view]
“But I'm a bard, and bards are useful to have around!”
—Nils

Nils is a playable character in Fire Emblem: The Blazing Blade. He is a half-dragon that takes the form of a blue-haired boy during the game and one of the few dragons to survive The Scouring, along with his sister Ninian.

Nils and his sister Ninian were born and raised in Ilia. During The Scouring, their mother, an ice dragon named, Aenir, was kidnapped and taken away from her family, prompting their father, Nergal, to embark on a search for her, but he could not do so with infant children in tow. After waiting for Nergal in some ruins near the Dragon's Gate on Valor, the siblings eventually decided to pass through the Dragon's Gate, as they were told to do if Nergal did not return for them in ten days. Here, they lost most of their memories as time passed, save for a few precious ones like those of their missing mother, whom Ninian remembered through a silver ring she kept as a memento. The siblings eventually settled in the world beyond the Dragon's Gate and lived there mostly in peace, with Ninian even becoming a powerful and well-respected priestess at a local Shrine. Deep down, however, they always longed for their birthplace, the land of Elibe. Thus, when they received an opportunity to return through the Dragon's Gate and go back, they quickly cooperated and passed through the gate, losing most of their quintessence and being forced to revert to their human forms.

However, this was after Nergal was corrupted by the dark magic that had, ironically, been used to open the gate to reunite with his children. Forgetting both his children and his initial motivation to open the gate, he was deluded into thinking that the purpose of opening the Dragon's Gate was to gain power beyond belief and rule over Elibe. He succeeded, and he and Limstella were confronted by the two siblings, who were greatly weakened by the loss of their powers and the travel through the gate.

Nils and Ninian were then held captive by the Dark Druid, but they eventually escaped from Valor and were chased across Elibe by Nergal's morphs and Black Fang agents who were operating under the maniuplation of Nergal's morph, Sonia.

Nils and Ninian eventually find refuge in an inn in Khathelet. Their reprieve is short-lived, however, as Nergal had deployed the Black Fang to apprehend them. At the beginning of Chapter 7, following Ninian's abduction by the Black Fang, Nils is evicted for being hunted by assassins.

Lyn's party enters the scene at this stage, whereupon Nils pleads aid from them. Lucius, who is in the vicinity at the time and had borne witness to Nils' eviction, also steps in to lend his aid. The party eventually manage to catch up to Ninian after defeating Heintz and his henchmen. Here, they find that Eliwood of Pherae had managed to catch up to Ninian first, rescuing her from the Black Fang's clutches. At the behest of Ninian, Lyn's party heads to an abandoned castle in Chapter 7x, where they help her to retrieve an heirloom from Ursula's subordinate, Beyard. The siblings will then travel with Lyn's party for the remainder of her journey, following which they depart from Castle Caelin after staying for a mere few days.

Shortly after their departure from Castle Caelin, the siblings are captured by Nergal once again. Eliwood's father, Elbert is imprisoned alongside the siblings on Valor, where he forges a strong bond with them through the stories he tells of his family. Some time later, Elbert helps the siblings escape from the island, where they attempt to flee through a small boat. Unfortunately, they are caught in a storm, whereupon Nils is thrown overboard and loses consciousness.

Nils later finds himself back on Valor when he regains consciousness, and sensing something amiss in the air, he makes his way to the Dragon's Gate during the the climax of Chapter 19E/20H. Here, he intercepts Nergal's attempt to summon a Fire Dragon by lulling Ninian into a trance. Calling out to Ninian, he breaks his sister from her trance and departs from the area alongside Eliwood, Hector and Lyn.

When the army reaches Badon in Chapter 20E/21H, Nils relates his tale to Eliwood, Hector and Lyn. A skirmish breaks out shortly after, and the army is forced to engage in battle. Ninian, stricken by grief over her actions in Dragon's Gate, later attempts to rush out to lend aid to the army, but is stopped by Nils. He eventually relents to her will by transferring his power to her. The result leaves him drained, and he faints in the fortress between Ostia and Thria in Chapter 21E/22H. The fortress is besieged by Eubans shortly after, and on Ninian's ardent request, Nils is not moved from his position as the army faces the enemy in battle.

Eventually, Nils becomes the army's fortune teller, replacing a weary Hannah, who complains about her service to the Lycian lords regularly after visiting Valor.

After the Fire Emblem, Bern's treasure, is retrieved from the Shrine of Seals in Chapter 27E/29H, Nils and Ninian are confronted by Nergal. At this point, Nergal has been fully revitalized after gathering the quintessence of the Four Fangs. In a bid to protect the army and Nils from harm, Ninian transfers her current abilities to Nils before departing with Nergal.

After obtaining Durandal in Chapter 28E, Eliwood is greeted almost instantaneously by an Ice Dragon. Unbeknownst to him, the ice dragon is in fact Ninian in her dragon form, and she is tragically slain by his hand. The horrible truth is revealed as she uses the remainder of her powers to re-assume her human form, whereupon she breathes her last in Eliwood's arms. Nergal uses the opportunity opened up by Eliwood, Hector and Lyn's grief to attempt to abduct Nils, but he is intercepted by Athos, who teleports into the scene and fends him off. When Nils regains his senses and realises what has transpired, he becomes overcome by grief.

The army eventually returns to Valor in Chapter 30E/32H, where it prepares to assault the Dragon's Gate in order to defeat Nergal's morphs and foil his plot to resurrect dragons. Nils, after a long absence from the battlefield as he tends to his grief over losing Ninian, decides to return to the army at this stage, resolving to continue fighting for the sake of respecting his sister's memory.

Eventually in the Final Chapter, Ninian is resurrected by Bramimond in Dragon's Gate. On being greeted by three dragons summoned by Nergal, she manages to muster her powers to seal two of them. Together with Eliwood, Lyn, Hector, Athos, and the others chosen by Mark, Nils is able to take down the remaining dragon.

With Nergal and his morphs defeated, along with the leading powers of the Black Fang, the siblings need no longer fear to live in the human world. However, as Nils reveals, the air of Elibe is not as pristine as it once was in the distant past, meaning that it will not be able to sustain them much longer. Should both him and Ninian remain in the human realm, their lives will be cut short. Accepting this fact, the siblings depart from the human realm, sealing the Dragon's Gate permanently from their side.

Depending on her supports, Ninian, having fallen in love with Eliwood, will remain behind on Elibe and wed him. Nils will then be left to depart from Elibe alone, and although sad that his sister will no longer be with him, he derives comfort from knowing that she is happy. In both endings, Nils seals the Dragon's Gate from the other side, ensuring that it can never be opened again.

As a result of the life of danger that he is forced to lead with Ninian, Nils is initially distrustful towards other people, choosing to distance himself from their company. Yet when the element of distrust is removed, Nils is portrayed to be selfless and kind, willingly putting himself in harm's way to protect those whom he holds dear. This is particularly shown through Nils' interactions with Ninian, where, despite knowing that transferring his power to her would weaken him, chooses to do so anyway due to her desire to aid Eliwood. Apart from Ninian, Nils's selflessness has also surfaced in Chapter 30E/32H. At this stage, although Ninian had technically fallen to Eliwood's hand, Nils does not hold a grudge against Eliwood as he knows the truth behind the tragedy. This is translated through his actions as he resolves to set aside his grief and lend aid to Eliwood's army, beginning from him warning Eliwood of a bolt of lightning aimed in the latter's direction.

Nils and Ninian are nearly identical in terms of gameplay. They have the same stats, stat growths, and as they level up, their gains transfer between them, including stat boosting items. Though they have different classes, they are interchangeable. They both may refresh an allied unit so that it may move again, or use one of four magic rings to provide a temporary stat bonus. Due to plot developments that remove one or the other from action, you may only control one at any time. The only aspect of these characters that does not transfer between them is their support bonuses. Nils does not have any support options of his own. Neither character can attack or retaliate, and they have a poor physical defense, so it is wise to keep them defended behind other characters. To offset this, they come with high growths in Speed, Luck, and Resistance, making them likely to avoid enemies, and resilient against magic attacks. They gain 10 experience every time they Dance or Play for an allied unit.

Later in the game, Nils uses his abilities of foresight to serve as a fortune-teller after Hannah leaves. Unlike Hannah's services, Nils's are free. In her place, he offers insight as to a general strategy for the next level, and additionally your characters' current supports, their options for building new ones, and where you stand in rankings.

Nils - The Mysterious Musician
Nils and his sister, Ninian, take their leave of Castle Caelin after a few days. He may well be traveling the land mastering his musical skills somewhere.

Ninian and Nils - Children of Destiny
After these dragonkin bid farewell to the land of their birth, they returned to their new world. Meeting Eliwood warmed the hearts of these ice dragons with the hope that man and dragon could live in peace.

Nils (Alternative Ending gained with Eliwood and Ninian A support)
Nils vanished through the gate in order to seal it from the other side. Those who saw him go will never forget his look of sorrow.

Nils is illustrated in the trading card game Fire Emblem Cipher with the following cards: 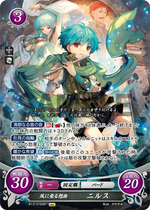 'Nils' is the Swedish and Norwegian nickname for 'Nicolas'. This name is Greek for 'victory of the people'. Saint Nicolas is the patron saint of children, sailors and merchants.

Official art of Ninian and Nils.