For the Archanea Series character reffered to as Nina in fan translations, see Nyna. For the similarly named Fire Emblem: The Blazing Blade character, see Nino.

Natalie Lander
[view]
“I guess there IS a silver lining in being stuck in my father's brigade. Are there more fine gents worthy of my attention? Maybe a whole smorgasbord of masculine delights?”
—Nina at the end of her paralogue.

Nina is a playable character in Fire Emblem Fates.

In her Paralogue, an old man asks Silas and Niles to help him protect his mansion, as it contains valuable Nohrian artifacts and items that a gang of thieves are planning to steal. Niles uses his previous thievery tactics to predict how the gang of thieves would infiltrate the mansion and successfully captures one. To his shock, the thief he finds is none other than Nina. Nina explains that she left her Deeprealm for some time and decided to help out a gang of thieves steal from the rich in order to feed the poor. Though Niles tried his best to sway Nina away from thievery, Nina decided to do so because of the cause she is doing it for. Nina manages to hit Niles before returning to the band of thieves.

Though she is cool and collected with a good intellect, Nina also has dubious delusions. Seeing two males in close proximity to each other, especially when they are interacting, fuels her delusions of a possible "steamy" relationship between the two. As a result of the innumerable delusions that she harbors about boys in her fantasies, Nina has thus developed, ironically enough, a debilitating nervousness that prevents her from interacting with them with ease, making her the worst at talking to males out of everyone in the army. This is evidenced throughout her supports with most male characters outside of her father and Forrest, as he is the only guy she feels comfortable talking with due to the fact that he does not dress nor act like a typical boy his age does.

Apart from her delusions, Nina is actually really friendly, albeit snarky, to other women whom she considers a friend and tends to help them when needed. Her supports with Shiro reveal that she enjoys watching plays because they help fuel her fantasies with more stories to write about.

She has a strained relationship with her father. Though Niles' intentions for putting her in the Deeprealms were for her safety, Nina disliked the fact that he was not more involved in her life. Through their supports, she can eventually reconcile with him after learning his history. However, she does not have the same sort of initial hostility towards her mother. With that said, Nina has inherited a sadistic side from her father, although she saves it for her enemies, saying things such as 'I wanna see them cry' or 'I'll make them suffer' when supporting an ally.

Base Stats (Before Inheritance)[]

Her two promotion options are the Adventurer and Bow Knight classes. As mentioned above, her decent positive Magic and Resistance modifiers and her strong Speed growths compliment the class both as a reliable attacker, especially with the Shining Bow, however, keep in mind that the -20 avoidance from it makes her more vulnerable against physical units. With the right mother if her Strength is less than her Magic, and a good healer, leading to a good supporting unit with offensive options. Her two skills are Lucky Seven, improving her Hit and Avoid for the first seven turns of a map, great for some Turn sensitive chapter maps in Conquest, and Pass for flanking enemy units and escaping enemy corralling. Bow Knight forgoes her supportive role, going for a more pure offensive role, adding swords to her repertoire. She learns Rally Skill for supportive options, which can assist the ally males next to her to activate her Personal Skill and Shurikenbreaker to help eliminate Shuriken users, especially in Conquest who has an extensive number of Master Ninjas in later chapters.

Nina is illustrated in the trading card game Fire Emblem Cipher with the following cards: 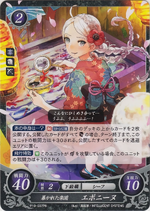 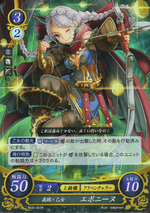 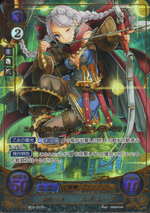 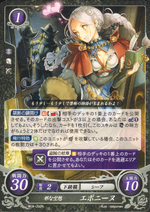 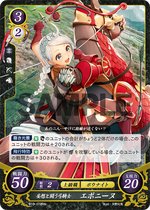 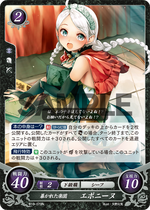 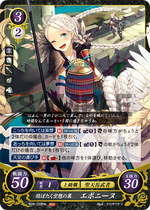 Éponine is a character from the novel Les Misérables. She is the daughter of a family of thieves, possibly referring to her class as well. In addition, she was unable to confess her feelings to the man she loved named Marius, relating to Nina's inability to speak with men. It should also be noted, that Éponine rebelled against her father's wishes when he was going to steal from the home of the lover of Marius, Cosette. The trait of rebellion is seen with her relationship with Niles.