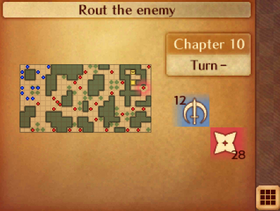 Chapter script
[view]
“With Izana safe and the Nohrian impostor defeated. Corrin heads toward the Bottomless Canyon in pursuit of Ryoma and Takumi.”
—Opening Narration

Ninja Village (忍の里 Shinobi no Sato lit. Village of Shinobi in the Japanese version) is Chapter 10 of Fire Emblem Fates in the Birthright Version. This chapter takes place in the Mokushu Forest.

The player starts off on the western area of the map while the enemy occupies the east. The enemies in this chapter are mainly Ninjas, Spear Fighters, and Shrine Maidens. Throughout the map, there are open areas that seemingly appear safe to traverse. When any unit steps into their range, spikes will be unveiled, chipping off 10% of any unit's HP at the start of each turn. The Dragon Vein spots throughout the area will also activate or de-activate these traps when used.

It is advised to deploy Azura in this chapter and keep her on the west side, out of the range of any enemy units. Takumi appears as an enemy at the beginning of the next turn, and having Azura talk to him will trigger an event where she sings a song to break him out of his trance. After this event is over, he will return to his senses and help you out for the battle. If you didn't deploy Azura, you will have to defeat him immediately as ignoring him can prove fatal. He will still join the army even if he is defeated in this chapter.

The area is scattered with thick forests which are impassable by land units, so fliers can help in getting across the map by bypassing the spike traps. They can also allow the player to bypass Kotaro if he is the last enemy standing, as he blocks the way to the chest. Once all enemy units are routed, the chapter is completed.