The Nintendo DS (ニンテンドーDS) is a handheld console manufactured by Nintendo, released in 2004. The letters "DS" stand for "Dual Screen" or, officially, "Developers System". It features a clam shell-design and has two LCD-screens, one of which is touch-sensitive. It also has a built-in microphone and supports Wi-Fi, for linking, or for access to Nintendo Wi-Fi Connection. It is backwards compatible with Game Boy Advance games (though only single-player works), but like the Game Boy Micro, it cannot play Game Boy and Game Boy Color games.

The Nintendo DS Lite, a re-design of its predecessor, has a slimmer, brighter and lighter design, which shares similarities with the Nintendo Wii and is more appealing towards broader commercial audiences. This system was released in 2006 and also plays GBA games.

In 2008, a third iteration of the DS, called the Nintendo DSi was released. It is thinner and brighter than the DS Lite and GBA backwards compatibility was removed.

In 2009, the fourth and final model, called the Nintendo DSi XL (called Nintendo DSi LL in Japan) was released. It is a larger version of the regular DSi and is the largest, heaviest, and brightest of the four models. Like the DSi, it does not play GBA games.

The DS line was succeeded by the Nintendo 3DS line in early 2011. 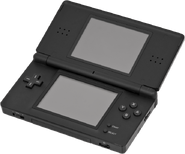