Chapter 7: The Rebellion of Ostia

Cavalier
[view]
“Yes. I suppose even I have someone I want to send a letter to when I die. If I die, I want you to read my letter.”
—Noah to Zelot in The Binding Blade.

Noah is a playable character from Fire Emblem: The Binding Blade.

Noah is best friends with Trec and trained Fir in the arena, the latter of whom he had feelings for. He is a member of the Illian mercenary squad lead by Zelot, who were hired by Lord Hector to fight against Bern. Once Hector is assassinated, they refuse to side with the enemies. He can be recruited to Lycia's army if talked by it's leader Roy or his captain Zelot.

In the following chapter, when they reach the Western Isles, he can recruit Fir by talking with her and convince her to switch sides. Once the war is over, he sets out to test his strength, traveling the world alone.

Noah is well aware that despite his skill as a mercenary, he may not live to see another day. For this reason, he tries to avoid forming deep bonds with other people. However, while fighting with Roy’s party, his way of thinking began to change, thanks to advice from Juno and especially due to meeting Fir, with him making a great effort to break out of his shell and finally develop a strong bond with others.

Noah states that he fell in love with Fir at first sight. He is also close to his liege, lady Juno. He wishes that he could stay relaxed like his best friend Trec, and has the swordsman Karel as his idol.

Noah suffers similar issues to Trec when it comes to joining time, as they both arrive in one of the most difficult chapters in the game, and the cavaliers you have had since the beginning will outperform Trec, and be on equal, or better footing than Noah. However, unlike Trec, Noah comes at level 7, compared to Trec's level 4, which allows for a quick and convenient early promotion if the player wills to do so. Noah's bases are quite decent for his level, though his below average growths in everything but skill and luck may hamper his usefulness if unlucky. His weapon ranks are solid, most notably his C-rank in swords, which allows Noah to use the Killing Edge immediately. His base con of 10 also allows him to use Steel swords unimpeded at base, and lose only 1 speed when wielding javelins before promotion.. If the player is willing to put in the effort into training Noah, he will become a rather balanced Paladin with an emphasis on skill. He can also replace Alen or Lance if they did not turn out well or died, but he will generally perform worse than either of them.

Noah - Vagrant Knight (流浪の傭兵騎士 Rurō no yōhei kishi)
"Wanting to test his ability, Noah left Zelot's group and traveled the world as a lone mercenary knight. Although several nations offered him positions in their militaries, he turned them all down. Many people have been inspired by his strength to live life by just being himself..."

He makes a brief cameo appearance in chapter 18 of the Hasha no Tsurugi manga.

Noah is illustrated in the trading card game Fire Emblem Cipher with the following cards: 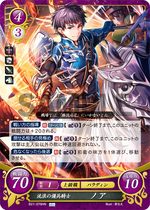 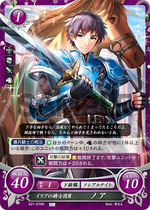 Noah is a Hebrew name meaning "rest, comfort". In the Book of Genesis, Noah had formed a covenant with God where he took his whole family and at least two of each animal onto a boat, while God flooded the world to punish all of those who had done evil. After the flood, a rainbow forms to show Noah that God did not forget him.

Noah is also a female name, for she was the daughter of Zelophehad, in Numbers 26:33 in the Bible.