A popular cameraman who is able to capture the purest beauty of any woman. He was mostly considered a mediocre photographer during his early days of his career. His debut piece of Maiko Shimazaki instantly propelled him into fame.

During chapter 2, news begins to spread in magazines tabloid of models who mysteriously vanish, all of whom were involved in a photoshoot with Nobu. His latest model was Tsubasa Oribe who frustrates him during their photoshoot, ending it prematurely and reschedules it for another day. While under Gangrel's influence, he enacts and Idolasphere over Shibuya, drawing the attention of Maiko. Elated to see her and asking her to return as his muse, he kidnaps her, forcing Itsuki Aoi and Fortuna to confront him and rescue Maiko. 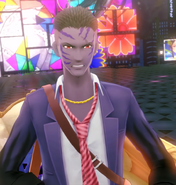 Nobu confronted by Gangrel.
Add a photo to this gallery