Paralogue 15: A Shot from the Dark

Michelle Ruff
[view]
“I AM BLOOD AND THUNDER! I AM A RIGHTEOUS FURY! ...I AM YOUR FUTURE DAUGHTER!”
—Noire's alternate personality when introducing herself to her mother

Noire is a playable character in Fire Emblem Awakening, the daughter of Tharja from the future, and can potentially be the mother or sister of Morgan.

Noire is the daughter of Tharja. In the future, whenever Tharja developed a new curse, Noire was usually the unlucky test subject along with her father sometimes. She would dread these sessions with her mother and inversely loved whenever her father would stop Tharja's experiments to take her home. Noire became timid and meek as a result of many years of testing. To counteract this, Tharja developed a special talisman which created a much more brash and somewhat violent persona for Noire whenever she wore it. With the threat of Risen becoming too much, her parents committed to fighting off Risen and both died protecting Noire. Noire was given Tharja's wedding ring, which she wore from then on. Noire joined Lucina and the other children during their journey into the past to prevent the ruinous future.

In her paralogue, she is captured by the bandit Ezra to be sold off to the slave trade. As luck would have it, Chrom and his army were nearby. While in her hiding place, she finds a Steel Bow and leaves to fight off the bandits until she joins up with Chrom's army and defeat the bandits together. After the battle she goes to talk to Tharja and shows her ring, the same ring Tharja has. Tharja is suspicious and threatens to curse her. Noire slips on her talisman and her personality drastically changes. She declares herself as Tharja's daughter. Tharja asks about the talisman, which Noire explains is the source of her more bold nature. Tharja takes it away, which shocks Noire as she relies on it to be strong. But Tharja assures her daughter by leaving Noire's retribution to her and to live as a normal girl.

After the war, if Noire is unmarried, she decides to stay with Tharja and works as her assistant. Some wonder if she did this to protect her infant self or spend the time she never had with her mother.

Being used as a guinea pig for her mother's curses during her childhood, Noire has developed a fearful, defeatist and pessimistic personality, usually being too timid to voice any opinions and easily intimidated, with supports with Brady and Laurent revealing that she is anemic, tending to get fatigued easily and pass out as a result.

However, seemingly due to a talisman from her mother, she has something of a split personality, with her other self acting more brash and aggressive and having no problem saying exactly what's on her mind while yelling, changing between both sides randomly mid-conversation and leaving others bewildered. In some cases it is implied that she herself developed her alternate personality as a coping mechanism. This is emphasized by the fact that she inherited some of the same obsessive traits as her mother (though nowhere near the same degree), as in her support with Inigo, she uses her bow to scare off women away from him.

She dislikes having to rely on others because she does not wish to stay quiet and insecure, apologizing to Severa for needing her help for nearly everything in their supports, lamenting her fragile health to Brady, and tells Yarne in their talks that while she is terrified of battle, she doesn't want to lose anyone or be a burden, so she forces herself to fight.

With her mother being emotionally distant and considerably abusive to her despite her father's attempts to protect her, Noire's relationship with her mother is strained, as she resents and lives in fear of her, and in her supports with the female Robin, she will start latching onto her as a mother figure and outright states she thinks she'd make a way better mother than Tharja did. Despite this, Noire constantly tries to seek approval from her mother, going so far as to learn how to use Dark Magic in combat by copying her movements. By the end of her support conversations with her mother, she seems to have made amends with her, as Tharja explains that her future self's intentions were more affectionate than they seemed, and tells her daughter that she loves her, much to Noire's delight.

Oddly, she seems to have a fixation for gold, as she often asks for it as gifts in her relationship event tiles. She is also shown to be a rather talented confectioner in her supports with Owain.

She is the fastest to escape in the army.

* - She picks up the Steel Bow on Turn 2 when she is recruited.

*Noire is able to inherit a skill that is unique to the Fighter and Barbarian class sets if Vaike is her father.

*Noire is able to inherit a skill that is unique to the Fighter class set if Gaius is her father.

*Noire is able to inherit a skill that is unique to the Fighter and Villager class sets if Donnel is her father.

*Noire is able to inherit a skill that is unique to the Barbarian class set if Gregor is her father.

*Noire is able to inherit a skill that is unique to the Barbarian class set if Henry is her father.

Shade Seeker
Tharja's daughter. Turns into a terrifying alter ego when pushed too far. The summer sun has made her a bit dizzy. Appears in Fire Emblem Awakening.

Noire - Miss Personality
Noire stayed with her mother after the war as her assistant. Was she simply trying to protect her infant self from Tharja's curses? Or did Noire find solace with the woman who brought her into the world?

Noire and Robin
Many wrote of Robin's legendary exploits, but accounts of his origins and character varied. Scholars, poets, and bards agreed on one thing alone—he loved his wife, Noire, above all else.

Noire and Owain
Owain set off on a lengthy quest with Noire to "stay his sword hand." Noire worried endlessly about what terrors her husband's sword hand might hold, but as it turned out, there were none.

Noire and Inigo
Inigo traveled the world, ever ready with a smile or a solution when trouble started to brew. For better or worse, he and Noire were said to be a good match, trading doses of glee for doses of glum.

Noire and Brady
Brady left the priesthood to become the world's scariest violinist. Noire tried to talk him out of it for fear his divine talents as musician and composer would curse them both to an early grave.

Noire and Gerome
Gerome and Noire were married and settled down near Wyvern Valley. Noire was said to be nervous around the wyverns and rarely left her husband's side.

Noire and Morgan
Morgan's memory never returned, but he didn't seem to miss it much and lived happily with Noire. Later, scholars would speculate he had come from a different future than the other children.

Noire and Yarne
Yarne tried desperately to find a safe haven after the battles were done, but even that journey was fraught with danger...despite Noire's best attempt to steer them out of trouble.

Noire and Laurent
Longing to meet his mother's intellectual standards, Laurent took Noire on an expedition around the world. Noire seemed startled at first by many of their discoveries but knew she was in good hands.

Noire is illustrated in the trading card game with the following cards: 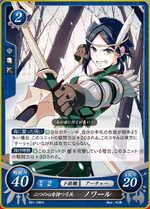 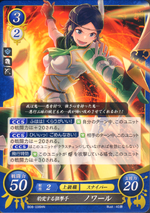 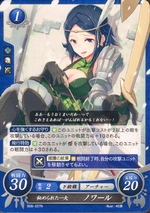 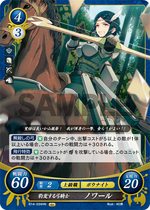 "Noire" is the feminine variant of the French word for black, noir.