Fighter
[view]
“You’re right, each of us can only achieve so much on our own. But you boys are still young. Don’t let go of your hopes and dreams.”
—Nolan to Edward and Leonardo

Nolan is a playable character in Fire Emblem: Radiant Dawn. He is the official leader of the Dawn Brigade, although Micaiah usually acts as such throughout the story. He is the oldest member of the Dawn Brigade, and acts like a father figure to best friends Edward and Leonardo, two other members. Edward and Leonardo think he is very old. He is the only Fighter in Micaiah's party and receives his own unique axe, the Tarvos, at a Base Conversation before Chapter 3-6.

Nolan became a successful merchant at a young age, but lost his fortune and status when betrayed by his associates. Downtrodden, he lost faith in mankind and began living as a tramp in the back alleys of Daein. At first, he thought the wars were none of his business. However, upon learning of the blood of his fellow countrymen being spilled by the Begnion Occupational Army, Nolan is inspired to become a freedom fighter, intent on liberating Daein. Initially, Nolan interfered with the Begnion forces alone, but after helping Edward and Leonardo escape from Begnion hunters, they joined forces. Rumors of their rebellious activities caught the ears of Sothe and Micaiah, who then contacted and joined them too. He then forms the Dawn Brigade to combat Begnion's oppression, with himself as the leader of the group.

Nolan is an experienced man and a leader who has seen life’s endurances, but has a gentle demeanor and does not act superior to the others. While the occasional jokes about his age bother him, he nonetheless is a reliable ally that offers sage advice to the younger members of the group. In contrast to his appearance and profession as a warrior, his hobby is reading, and can often be seen lost in a book while not in battle, as shown in an info conversation with Sothe in Part III.

Nolan is one of the easiest characters in the Dawn Brigade to train, because he joins early on at a somewhat high level and decent stats, thus proving to be a useful tank early on. His Skill and Speed growths are quite impressive, compensating for his average strength growth. He can promote rather quickly, and can prove to be a formidable unit that can be used to put holes into the opponent's team. The additional capacity also opens space for an additional skill, such as Resolve or Wrath. Giving him Beastfoe is recommended during Part 3, as it will allow him to cleave through the opponent, as well as Level Up very quickly and possibly promote into a Reaver. It should be noted that Nolan will likely cap his Magic as a Reaver, so putting both Imbue and Renewal on him is a good idea.

Nolan is a bit different from the other potential Reaver, Boyd. While Boyd will easily cap his HP, strength, and Defense, Nolan will cap his magic, skill, speed, luck, and resistance. Also, Nolan already comes with Nihil, meaning he does not have to waste Capacity for cancelling out Aurora, should he be brought into the final chapter.

Nolan is illustrated in the trading card game Fire Emblem Cipher with the following card: 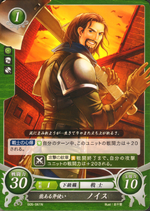 Nolan's name may be derived from Captain Louis Edward Nolan, a well-respected British horseman during the Crimean War, who was killed during the catastrophic Charge of the Light Brigade.

Artwork of Nolan in Fire Emblem 0 (Cipher) by Senri Kita.

Nolan as a Fighter in Fire Emblem 0 (Cipher). 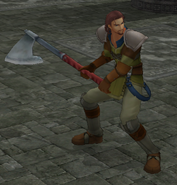 Nolan's battle model as a Fighter in Radiant Dawn. 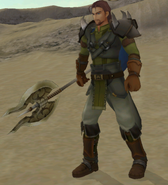 Nolan's battle model as a Warrior in Radiant Dawn.

Nolan's battle model as a Reaver in Radiant Dawn. 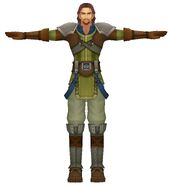