Chapter 2: The Pilgrimage (Joins in Chapter 4: Land of Sorrow)

Kirk Thornton
[view]
“I never took a wife or sired children. I’ve dedicated my life to the teachings of Mila. But I’ve had the chance to watch you, Celica, as well as Mae and Boey. You’ve all become such fine, noble-hearted youths. Seeing you grow up has given me both joy and a sense of purpose. I pray you’ll each live out rich lives of your own, unfettered and free.”
—Nomah to Celica in Echoes: Shadows of Valentia

Nomah is a Sage from Fire Emblem Gaiden and its remake, Fire Emblem Echoes: Shadows of Valentia. He is 71 years old.

He is the wise Sage who trained and raised Celica after Mycen sent Celica to the Priory to keep her safe. He initially briefs her on the dangers of Celica's journey. He joins at the beginning of Chapter 4 after going through a hidden passage in the Temple of Mila. After the war, he became the high priest of the united faith of Mila and Duma.

Nomah is one of the weakest units in the game. He has good Skill and Resistance, but given the fact that Magic user's Accuracy rates are not affected by Skill, it only really helps boost his Critical hit chance. His Speed is quite low, a common problem among most Mage units in Gaiden. His low Speed combined with his low Luck, Evasion, Defense, and HP makes Nomah the most fragile unit in the entire game, a quality that seriously hurts his late game potential. He comes with Sagittae, allowing him to deal respectable single attack damage, but he has to get close to the enemy to do so which is extremely dangerous for him. Even though he is capable of reasonably high damage, all other Mage units are capable of dealing more than him. He lacks Thunder, making him a strictly 2 range unit, and his spell list is more limited than any non-Villager Mage.

Still, he is not entirely without his uses. As with any character promoted to Sage, he can act as a healer with his Recover spell. He is capable of doing decent damage and finishing off enemy units at mid-level health, or weakening them considerably. However, you MUST ensure that nothing in the area can attack him or he is likely to die.

All in all, Nomah is not really worth using. He is far too fragile and requires too much protecting for the least payoff. Any other ranged unit in the entire game will be preferable to him for one reason or another, so it is best for him to simply act as a backup healer or a battery for your better Mage units.

Nomah still comes across as a pretty weak Sage in Echoes, even with his growth rates boosted a little bit. While he still has good Skill and Resistance, his Luck and Defense are really low. His Attack is also pretty subpar for a Sage on top having low Speed.

In Echoes, he is now able to use Thunder, and with Sagittae now having a longer attack range than it did in Gaiden, he is able to attack from a safer distance than he originally could.

He also has his uses for being a back-up healer as well as providing decent support bonuses to Celica, Mae, Boey, and Genny (also Mycen in the post-game). All in all, despite Nomah having his uses, he will most likely end up being a liability if you have better sages like Boey.

"He became the high priest of the unified faiths of Mila and Duma."

"After spearheading the unification of the Mila and Duma Faithful, Nomah became the new sect's high priest. Despite being adored by a congregation numbering in the tens of thousands, his friends attest that he retained his playful, lighthearted nature all his life."

Concept artwork of Nomah from Echoes: Shadows of Valentia. 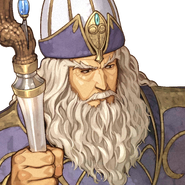 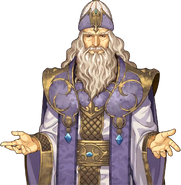 Nomah's battle model as a Villager in Echoes: Shadows of Valentia. 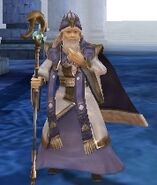 Nomah's battle model as a Sage in Echoes: Shadows of Valentia.

Nomah's battle model as a Mage in Echoes: Shadows of Valentia.
Add a photo to this gallery