Brittney Harvey
[view]
“Prince Marth, 'tis an honor. By your leave, though, I'll be savin' the curtsy-bobbin' for later. Quickly, sire!”
—Norne in Shadow Dragon.

Norne is a playable character exclusive to Fire Emblem: Shadow Dragon and Fire Emblem: New Mystery of the Emblem.

She is a volunteer soldier who hails from a village near Altea Castle. When Marth and his soldiers reach Draug, who has prepared a vessel for them, Norne follows him and is introduced to Marth. As an archer who possesses great skill with her bow, Norne volunteers to join Marth´s army when he is escaping from Altea. After the war, she returns to her village and lives a peaceful, yet otherwise unremarkable life.

She reappears in Fire Emblem: New Mystery of the Emblem, joining alongside Frey.

Norne has a somewhat cheery personality compared to others in Shadow Dragon, implied by her greeting with Marth and her death quote. It is said in the 20th Anniversary Book that Norne has mutual romantic affection for Draug.

A base conversation reveals that Norne has no sense of direction; this statement is somewhat proven through being with someone in all of her first appearances (Draug in Shadow Dragon, Frey in New Mystery of the Emblems main story, and Caeda in the third downloadable episode).

Her village is near Sera village, the village where Kris came from, so she used to see him/her when his/her grandfather asked to carry the wood to Norne's village.

One time, she got lost in a forest and started crying, but Kris came and stayed with her until adults led them out, which cheered her up thoroughly, and she developed a friendship with him/her. She had been thinking about him/her ever since, as revealed in their third conversation.

As exclusive to being in only Normal Mode, Norne struggles to have a purpose, the problem is two fold: Bows in Normal Mode is rather unnecessary as you won't be in need of high accuracy chip damage from afar, and you can't apply that to any of the Hard Modes since she is locked to Normal Mode only. The next reason is that you need to have one person killed in the prologue, (excluding the person who must be sacrificed, which will likely be Gordin) which means you must either sacrifice one of the 3 cavaliers who are objectively better than her, or sacrifice Jagen which is just silly since Norne's EXP rate will be slower than those other three cavaliers since she cannot do enemy phase whatsoever. Overall, Norne is a sub par unit who struggles to give out any lasting impact to the team and in some cases; might even hurt the team since you need to kill one unit who is better than her.

Joins automatically from turn 3 in Chapter 6: Nest of Vice.

The Volunteer
A volunteer who took up arms in the struggle that consumed her homeland, Altea. She aided Marth's escape when Altea fell. Appears in Fire Emblem: New Mystery of the Emblem.

The Volunteer
Her stint as a warrior over, Norne returned to her home in Altea and lived an unremarkable but happy life.

The Volunteer
Norne returned to her village, to live a peaceful, ordinary life undisturbed by war.

“Apparently Ryan's wounds are going to heal soon. Isn't that nice?”
—Norne's unused conversation in Prologue VIII in New Mystery of the Emblem to Kris

Norne is illustrated in the trading card game Fire Emblem Cipher with the following cards: 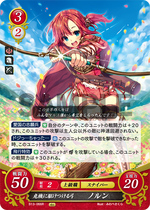 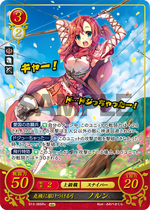 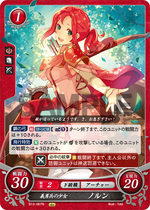 The Norns are a group of witches from Norse mythology.