“Whoa, be careful with that! Even if it's just a practice sword, you still shouldn't be playing with it! C'mon, miss, just go on home. I can even have a couple of my men escort you back home if you want. Where do you live?”
—Norton, to Sasha before realizing her true identity

Norton (ノートン Nōton) is a playable character from TearRing Saga: Utna Heroes Saga. He is a knight of Wellt who leads the castle guards. He is also a close friend of Lionel.

Due to his disinterest in political conflicts, Norton refuses to aid Lionel in his plans to rebel against Codha. In his recruitment scene, he initially mistakes Sasha for a child and reacts with surprise upon learning that she is the princess of Wellt. He joins Runan's army on Sasha's orders because of his loyalty to her. Like many other members of the army, Norton suspects that Zeek is a traitor and fails in his attempt to convince Kate to think the same.

In the ending, Norton returns to Wellt and receives an invitation to visit Lionel's wife.

He appears as an enemy unit in Map 6. To recruit him, have Sasha speak to him.

Norton is a unit of solid stats, but a desperate need to promote as soon as possible. He has decent Strength, Skill, Speed, and above average defenses, coupled with enough Weapon Level to effectively fight. However, he is an Armor Knight, which is a class with abysmal movement, hampering his usability. Norton's Movement issues are fixed by his promotion, which gives a mount to him, allowing him to keep up with the mounted units. So, if players want to use Norton, they should promote him early, and then he will be quite solid.

“I've been hiding in those woods for ages! You'd better be worth the wait!”
—Norton's battle quote as an enemy in Map 6 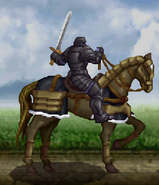