Nosferatu is an offensive spell introduced as Black Magic in Fire Emblem Gaiden. It has been repurposed as a Light and Dark magic spell in the Fire Emblem Series.

This tome is suitably named “Nosferatu” for its vampiric effect of absorbing HP from an enemy unit. It is especially unique in Gaiden, as it is the only weapon (apart from the Falchion and certain Amiibo weapons) that can damage Duma after his HP has been depleted to 52.

In Mystery of the Emblem and its remake, this spell may only be cast by female magic users.

In Fire Emblem: Genealogy of the Holy War, Nosferatu can only be obtained in Chapter 6, during the second generation. In order to obtain it, Seliph must capture Isaach Castle before capturing Sophara castle, and must speak to Julia, after which she will obtain the Nosferatu, an A-Rank tome. Thanks to her major Naga blood, Julia is the only character who has access to Nosferatu and can wield it. (Theoretically, Deirdre can wield Nosferatu for the same reason Julia can, but the tome is not available in the first generation.) Conversely, if Sophara Castle is captured first, Seliph will give Julia the Aura tome, and Nosferatu will no longer be available for the rest of the game.

In The Sacred Stones, the Nosferatu tome is not available for purchase in any stores on the World Map, essentially meaning that only a few obtainable copies of the tome exist in any one given gameplay. Knoll joins the player's army with the tome as a starting item, and there is at least one available in a certain chest residing within the Tower of Valni. Furthermore, the shop at Narube River also offers this tome for sale when a battle takes place there, other than skirmishes in Creature Campaign.

In Three Houses, Nosferatu is a spell all Units can learn when their Faith stat has been tutored to a Rank D+.

Nosferatu traps an enemy directly in front of Robin, dealing damage while healing them. Robin will always deal 15% damage, however, depending where Robin hits their opponent, the healing changes. If attacking from the front, Nosferatu will heal 13% of Robin's damage. If attacking from behind, Robin will heal 16% of their damage. Nosferatu is considered a grab move and can hit through shields. It has a maximum usage of 4 casts before Robin is forced to discard it. A new tome will regenerate after 40 seconds.

The damage healed is mainly based upon percentage differences. If the enemy has 0% and Robin is at 999%, Robin will heal themselves by 300%, when Robin has 160% and the enemy has 0%, Nosferatu will heal Robin by 60%.

Nosferatu appears in the move sets for Tharja and Linde in Fire Emblem Warriors, as Tharja's standard Warrior Special and Linde’s Awakening Special, with both versions healing the user after use.

Nosferatu appears in Dragalia Lost as one of Veronica's skills, who was a character released as part of the first Fire Emblem crossover event.

Its Japanese name likely comes from the prefix "Re" (リ), used for many white magic spells in Gaiden, and the English "desire" (ディザイア). Its English name, "Nosferatu", is a Romanian word that is synonymous with "vampire", popularized by an unlicensed film adaption of Dracula which replaced, among other names, "Dracula" with "Nosferatu".

Resire, as it appears in the second series of the TCG.

Animation of Linde casting Resire on an enemy Pirate in Fire Emblem: Mystery of the Emblem. 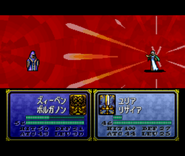 Julia casting Resire on Sieben in Genealogy of the Holy War. 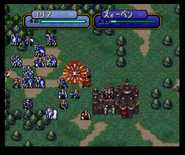 Map animation of Julia casting Resire on Sieben in Genealogy of the Holy War. 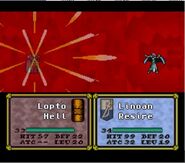 A casting of Nosferatu in Path of Radiance.

Tharja casting Nosferatu on an enemy Sniper in Awakening. 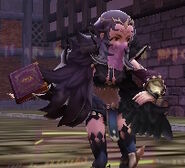 Nyx wielding the tome of Nosferatu in Fates.

Nyx casting Nosferatu on an enemy Mercenary in Fates.