Cindy Robinson
[view]
“What next, child of fate? You slipped my grasp at the border, but now you run straight to my snare. Despite the bungling of that useless Berkut… Tsk, no matter. All will be mine soon enough. I’ll not let the likes of Jedah claim a bearer of the Brand. The power of such a soul could grant me life eternal!”
—Nuibaba

Nuibaba is an enemy character from Fire Emblem Gaiden. A dreaded arcanist who has recently allied with the Duma Faithful, she is known as the mistress of Fear Mountain who sold her soul for the power of Medusa. She is 124 years old according to internal data for Echoes.

In the past, Nuibaba was once a pretty young girl who lived happily with the man she loved. However, one night she was attacked by bandits who left a hideous wound on her face, causing the man to start avoiding Nuibaba in favor of her younger sister. Growing tired of her presence, the man and the younger sister lured Nuibaba deep into the woods and pushed her off a cliff. As Nuibaba lay dying, Medusa appeared before her as a ghastly apparition, attracted to the scent of death. With the promise to restore her and extend her lifespan, Nuibaba agreed to form a contract with Medusa. Upon being revived, Nuibaba took revenge on her former lover and sister for backstabbing her.[1]

After secluding herself to the woods, she became obsessed with power and beauty, eventually becoming a witch, and began kidnapping numerous beautiful Rigelian women for several years, sacrificing them to keep her longevity and youthful beauty.

Tormenting the locals in her vicinity alongside Jerome, she kidnapped at least three local girls. One of them was a Saint from the Church of Rigel named Tatiana, whom not only did she plan on sacrificing to Medusa, but also was kept captive as a means to force Zeke into fighting for the Rigelian army alongside Jerome. (The other two were a Cleric from the Church and a local girl who's a friend of Tatiana)

After Berkut convinced Emperor Rudolf to station him and his army at the border in case the Deliverance breaches the Sluice Gate and enter into Rigel, Nuibaba approached Berkut as he made preparations to go to the border.

Though antagonizing Berkut at first regarding his failure to defeat Alm, Nuibaba insisted that she wished to aid Berkut. Though Berkut refused such aid, Nuibaba warned him that another failure would result in Rudolf refusing another chance to Berkut. She then spoke of the power that the Duma Faithful possess, and how Jedah acquired power by offering his daughters to Duma.

Berkut was disgusted by this, and still insisted on fighting Alm with his own strength, Nuibaba asked that Berkut at the very least take a mirror that was filled with her sorcery to battle, and shatter the mirror should Berkut ever be cornered in battle. Though reluctant, Berkut took the mirror in the end. Nuibaba's mirror would be broken by Berkut in the end, nearly granting him victory, but the spell was broken by a charm Alm had gotten from Celica years ago.

Having failed to capture Alm using Berkut, Nuibaba resorted to using another means to lure Alm to her. Creating a phantom of Celica, she communicated with Alm, telling him that Celica is being held prisoner at Nuibaba's abode.

When he entered her Abode, Nuibaba appeared before the Deliverance and revealed to Alm that the Celica Alm had seen was not real, which Alm had suspected. However, despite her trap and using the power of Medusa, Nuibaba would ultimately fall in battle against the Deliverance, thus ending her machinations as well as freeing Tatiana and ultimately allowing Zeke to betray Jerome.

In Sonya's ending, it is rumored that a new witch had taken up residence in Nuibaba's abode.

Nuibaba is depicted as a cruel and narcissistic woman, caring little about others or even about Duma despite being part of the Duma Faithful. Her status as a witch was not out of swearing an oath to Duma, but for the purpose of retaining her beauty and the ability to use dark magic. This obsession for an everlasting youth and beauty has led her to capture and sacrifice beautiful maidens from all across Rigel to Medusa.

Despite also desiring to capture Alm for being a Brand bearer, Nuibaba did not share the reason with Jedah, as she sought to capture Alm for the purpose of sacrificing him under the belief that doing so would grant her immortality and eternal youth. This obsession with beauty and youth likely stems from how Nuibaba was betrayed by her sister and former lover, who tried to kill her because Nuibaba had become unsightly to them from the scar she received from the bandits that attacked her.

Nuibaba is also shown to be very skilled at manipulating others. Taking advantage of Berkut's fiery spirit, she made him take a cursed mirror that he would end up using in a desperate attempt to defeat Alm. Later on, she would trick Alm into thinking that she had captured Celica by sending an illusion of Celica to warn Alm about Celica's predicament; while Alm suspected that this was a trap, he still chose to go forward.

“Come close... Let me share with you death's embrace!”
—Battle quote in Shadows of Valentia

When translated from Japanese, "baba" or "婆" can translate as "old woman" or more crudely, "hag."

Cutscene still of Nuibaba from Echoes: Shadows of Valentia. 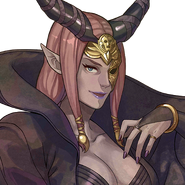 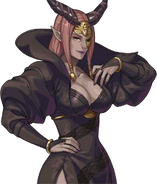 Nuibaba's battle model as a Witch in Echoes: Shadows of Valentia.