Leader of the Begnion Occupational Army

Member of the Begnion Senate

Bishop
[view]
“I don’t understand. Why would they fight against the vice-minister, chosen of Ashera? Are they somehow...deficient? You will perish for your defiance of the empire, vermin!”
—Numida Default Battle Quote

Numida (ヌミダ) is a boss character in Fire Emblem: Radiant Dawn. He was a high-ranking Begnion senator. He was tasked with ruling Daein following the Crimean victory in The Mad King's War, though he proved abusive of his power, sending able-bodied young men to work without pay in labor camps and levying goods from the Daein people for the Begnion Occupational Army's use. After the Daein Liberation Army begins to emerge victorious against the Begnion Occupational Army, Numida disavows all knowledge of these abuses, instead blaming his own General Jarod for such atrocities in order to avert blame.

He was killed in Grann Desert by the forces of the Empress Sanaki. On his position, after killing him, a Laguz Gem can be found.

Numida: I don't understand. Why would they fight against the vice-minister, chosen of Ashera? Are they somehow...deficient? You will perish for your defiance of the empire, vermin!

Micaiah: You!
Numida: Who are you, girl?
Micaiah: Duke Numida! I will never forget your oppression of the Daein people, or your cowardly flight from justice!
Numida: Ah, you're from Daein. You should know that I had nothing to do with that unpleasantness. That was all General Jarod's doing.
Micaiah: General Jarod was a scoundrel and a fiend, but at least he had a soldier's honesty in his villainy. You black-hearted senators nauseate me, weaving a dense tapestry of lies that you yourselves believe!

Numida: So, child, what the vice-minister said was true! Wicked infant! How dare you pretend to be divinely inspired while you heard absolutely nothing from the Goddess!
Sanaki: I...

Numida: Fool! Do you honestly believe that your dark god can triumph in the face of Ashera's divine majesty?
Sothe: She's not my dark god. To be honest, I don't care about the gods. They have nothing to do with me.
Numida: What?! Then who do you fight for?!
Sothe: I fight for my family, and I fight against tyranny. That is enough.

Numida: Ahhh! What a fearsome beast! Only the dark god could create such a monstrosity!
Skrimir: What's wrong, little beorc? Frightened? If you cannot look upon me, you cannot hope to defeat me!

Naesala: Duke Numida...I wonder why a coward like you was turned back from stone? Especially considering some of your more...impious transgressions.
Numida: W-what are you talking about? I am a Senator in high standing!
Naesala: My country provides me with excellent spies, your grace. I know every atrocity you committed while in Daein. I hold information that would ruin you if it were made public. It's rather a shame all that work will be wasted, since this is the last day of your life.

Numida: It's tragic, really, that the Holy Knights have wasted so much time and energy protecting a sham apostle! it's not too late, you know, to align yourself with the true chosen of the Goddess.
Sigrun: The loyalty of the holy Knights can only be commanded by one person, and that will never change. It is my duty and my privilege to execute her orders and destroy the enemies of the apostle!

Tanith: I am second commander Tanith of the Holy Knights! Enemies of the apostle, beware!
Numida: How sad that you still put stock in your laughable infant of a holy figure. Fool!

Nolan: No one escapes from their past, Numida. We all have to answer for our crimes one day. Today is that day for you.
Numida: Silence, cur!

Edward: This is for the free people of Daein! Haaaa!
Numida: Don't you idealistic twits ever give up?

Leonardo: You crushed freedom in Daein for years! Do you even have a conscience?!
Numida: Daein gutter trash! I should have had you all killed when I had the chance!

Numida: Disciples of Order! Hurry up! Destroy them!
Fiona: Why would you want to step on the people of Daein? You are long overdue for justice. I truly feel blessed that I'll be the one to give it to you.

Laura: You have caused more suffering than any being I've ever met. Did you not learn that the goddess will someday punish those who harm others?
Numida: Peasant! How dare you preach to me!

Numida: Aargh! Where are my guards? Why do I have to be the one to fight?!
Aran: That's right, I remember who you are. You let others do your dirty work while you run for safety. Looks like you're running out of places to run, Senator.

Black Knight: Your time is done.
Numida: Damn you, ghost! If you had just stayed dead, I could have done whatever I wanted to Daein!

Numida: Wh-who are you?!
Stefan: I am the desert, and I brook no intrusion. Make peace with your goddess. 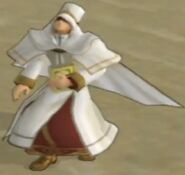