Chapter 4: Battle in the Lea (Shadow Dragon and the Blade of Light)

Final Chapter Part 3: Light and Shadow (Mystery of the Emblem)

Neya Michiko
[view]
“I am Nyna of House Archanea. 'Tis Archanea's burden to protect the world of crisis- a duty I have striven to fulfill. But Dolhr has laid waste to my kingdom, and now I find myself powerless to stop the world from falling into ruin. Marth... Please, pick up the banner where I have let it fall. Lead your might against Dolhr, and free us all.”
—Nyna in Shadow Dragon.

After Archanea's fall to the Dolhr Empire, Nyna and her personal guard, Dolph, Tomas, Macellan, and Midia, were led by Boah to escape Castle Archanea. During the escape, they were ambushed, leading Boah to attempt to reason with the Dolhrian soldiers to ensure Nyna's safety. Nyna, defying Boah's attempt, ordered her soldiers to fight the Dolhrians. Reinforcements arrived shortly after, eventually leading Nyna and her entourage to be cornered in a room in which she meets Grustian Sable Knight Camus. One of her knights, Midia, charges at Camus who strikes her down, and upon her fall, Nyna urges Camus to kill her because she has no wish to live with Midia fallen. Camus instead attempts to reason with Nyna and expound on why he killed her father as well as the matter of keeping Nyna alive. After being explained that King Archanea was a hedonistic and malignant ruler and Nyna's leadership paired with the adoration of her people was now required to usher a renewing of Archanea, Nyna scoffed at Camus. Camus then confronts her about the Archanean occupation in which he would be willing to collaborate with Nyna for the reformation and reconstruction of Archanea. Nyna agrees but explains that she will always bear hatred of him and will not hesitate to kill him when the time comes to reform an Archanean league to combat Dolhr in the future. Nyna then dedicates the next two years into assembling an army and reconstructing Archanea to overthrow the empire.

Two years later, Emperor Medeus demanded Camus to hand over the princess and seize full control over Archanea by sending his own forces. Camus' conflict over this has led him to stage an escape plan where Nyna was eventually handed over to Archanea's ally, Prince Hardin of Aurelis. With Hardin's help, she meets up Marth and accompanies him in his quest, gifting him with the Archanean royal treasure, the Fire Emblem. In the later stages of the war, Marth is placed in opposition to Camus, who refuses to surrender, even when Nyna begs him to, due to his deep loyalty to his country, and ultimately defeats him. Nyna is struck with grief when Camus is presumed to have died, as she is in love with him, but continues to accompany Marth on the rest of his quest for the sake of Archanea.

Shortly after Medeus' defeat, she encounters Marth after seeing seeing Caeda looking heartbroken. After learning from Marth what just happened and realizing that both Marth and Caeda have feelings for each other, Nyna, not wanting Marth to suffer like she did, convinces him to confess his feelings for Caeda.

After the war concludes, Nyna is pressured by Boah to choose a foreign man of royal heritage to wed and therefore make into the new king of Archanea. Her two options are Marth and Hardin, and although her heart still yearns for Camus, she chooses Hardin as her husband. This decision is based on her knowledge of her friend Caeda's mutual love with Marth and Nyna, who was responsible for Marth and Caeda being engaged, does not want to break their hearts.

Nyna pretends to love Hardin, despite romantically loving only Camus. When Hardin discovers this, he becomes distraught from grief and soon accepts the Darksphere from Gharnef, thereafter falling under its possession and transforming into a mad tyrant.

Nyna blames herself for Hardin's fall into darkness, believing that she is the only cause of his sorrow and heartbreak. She entrusts the Fire Emblem to her apprentice, Linde, who returns it to Marth as a request. Once Hardin finds out about this, he hands Nyna over to Gharnef, who prepares to sacrifice her alongside Lena, Maria, and Elice to revive Medeus as a Dark Dragon.

During the final chapter, Nyna is awakened from Medeus's mind control by a mysterious masked knight named Sirius, whom she correctly suspects to be Camus. However, he denies this and vanishes once Medeus is once again slain by Marth. Afterwards, she leaves Archanea in the hands of Marth and disappears, presumably to confront Sirius (Camus, also known as Zeke) in Valentia or to find her own path after all her sorrows.

Having endured many tragedies in her life, Nyna almost always appears to be sorrowful and emotionally distant, as seen by her facial expression on her face portrait. Much of her life is filled with nothing but regretful choices and living with little personal happiness. Aside from those who are particularly close to her, her personal affairs are a well kept secret. She is able to mask her true feelings behind an emotional calmness that sometimes makes her difficult to read.

She harbors a deep affection for the Grustian Knight Camus, the man who rescued her from her family's execution, but even that happiness ends in multiple heartbreaks regarding him. Her first major emotional display occurs just before Camus battles Marth in which she pleads with him to join her cause. Unable to sway him, she watches in sadness as Marth cuts him down. She is instantly able to recognize him despite him wearing a mask and her trance is only broken by him. After the war, should she survive, she potentially follows him to get answers.

A kind and understanding woman, her ideals of peace earned the immediate trust of Marth, into whose hands she in turn placed the Fire Emblem, an artifact of immense importance to Archanea. Aside from her attendant Linde, she has a close relationship with Caeda. Politically, she was to wed either Marth or Hardin, but chose the latter out of respect for her friend's love for the Altean Prince.

She follows her social obligation to marry Hardin, but finds little personal happiness out of their union. Nyna maintained a public facade of happiness, but privately she did not share the same undying love that Hardin had for her. This unreciprocated love ultimately lead to his descent into tyranny, which she blames herself as the emotional cause of his fall.

Despite all of this, Nyna is a true born leader, able to inspire others and rally allies to help her cause. Many who meet her are impressed by her skillful leadership, exceptional wisdom, and expert control of her emotions.

“Ah, Camus...”
—Nyna's Death Quote in Mystery of the Emblem

In the Fire Emblem anime, only a picture of Nyna appears during episode 1, when Cain is arguing his point that above all else Nyna and Aurelis need to be rescued before Dolhr gets to them.

In the manga, her first appearance is in volume 2, where she is staying with Hardin at Aurelis Secondary Castle. She thinks a lot about Camus and the day that they parted after he saved her. While she is in the castle, she gets a surprise visit from an injured Caeda, who barely makes it to Aurelis Secondary Castle to give Nyna a silver sword from Marth as a symbol of Altea's devotion to Archanea. Caeda then explains to Hardin that her pegasus felt something odd to the west. Hardin realizes that what the pegasus feared was actually dracoknights from Macedon, who have come to kill Nyna and Hardin and take Aurelis. Although Roshea and Villick are sent by Hardin to protect her, Nyna and Caeda are almost killed by a dracoknight until Wolf and Marth save them. She seems to strike a friendship with Caeda, and through a conversation between the two it is revealed that Caeda is in love with Marth, while Nyna is still grieving Camus leaving her.

Nyna is illustrated in the trading card game with the following card: 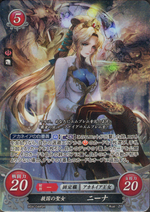