Amber Hood
[view]
“I am no "young lady", and I neither require nor desire your paltry protection.”
—Nyx

Nyx is a playable character in Fire Emblem Fates and an ally in the Conquest and Revelation routes.

Nyx was born to a family of talented mages in Nohr. She was a prodigy in Dark magic arts, as was the rest of her family, but quickly became too powerful. As a result, she started testing her abilities on people for fun, killing many innocent civilians. She wove a spell so dark and powerful, its magic inflicted an unbreakable curse, causing her to be unable to age. In her support conversations with Xander, she reveals that she quickly became suicidal and depressed after she was cursed. She hid herself away from the world, seeing no possible future for herself. However, Nyx decided that she wanted to live in order to atone for her crimes, and has since strived to overcome her past.

In her My Room quotes, Nyx reveals that the marks on her forehead and cheeks are designed to reflect curses.

Though she does not expect the curse to dispel, she seeks The Mirror of Truth, the relic that reflects a person's true appearance, in hopes of seeing her adult body.

Chronologically, she states that she is an older woman, much older than Corrin at least.

Nyx first appears in Chapter 9, where she is wandering around Fort Dragonfall. Unfortunately, a group of Hoshidans, who had captured Azura, were in the fort. When they approached Nyx, they thought she was a young girl and tried to take her into protective custody, but she managed to escape them.

The Nohrian Army had also arrived in Fort Dragonfall in order to pass through to the port town of Dia, though they had to fight the Hoshidans stationed there. Corrin finds Nyx and wonders what she is doing out all alone, and also mistakes her as a young girl. While Nyx initially refuses Corrin's attempts to have her join the army, she eventually decides to join since as she expressed a desire of companionship which she had not had for a while.

After joining the Nohrian army, she informs Corrin about a breakable wall near her which could be used to ambush the Hoshidans and allow the Nohrians to win. She later helps settle the age old conflict between Hoshido and Nohr.

Nyx appears in Chapter 15, where she stumbles into the Sevenfold Sanctuary in an attempt to hide from the masses. Corrin finds her and asks her if she needs help, which she refuses. Nyx decides to join the army, after noticing Corrin's determination at such a young age and believing that they may be able to understand her.

Despite her youthful appearance, Nyx has, in fact, an intellect and wisdom belonging to a mature woman. A pessimistic individual by nature, Nyx views life rather gloomily. This is not without a cause, however; as earlier mentioned, this is owing to her framing her entire life around an innate desire to atone for her crimes of killing innocent people. This desire is especially evident whenever she participates in battles, where the things she says revolve around her constantly reminding herself that her every action is part of her "punishment". It is because of her past that eventually her demeanor became cold, serious and pessimistic. As a result, Nyx transformed into a social recluse, choosing to isolate herself from society, only interacting with others when she deems it necessary for her to do so or when she is approached by other members of the army.

However, this does not mean that Nyx is deprived of her other emotions as well, as she is still capable of showing kindness and humor and is able to fall in love with others. Nyx is also very fond of reading books, particularly romance novels, as revealed in her supports with Kaze.

Nyx is said to be the most understanding of women out of everyone in the army.

◾ Note: Growth Rates as a Sorcerer

Nyx is the second Dark Mage to be recruited in Conquest and the first in Revelation. Her outstanding Magic and Speed growths makes her an incredibly potent magic user and easily one of the strongest Magic users in Fates alongside Orochi and a Rhajat mothered by either. With most units having low resistance, she can easily dispatch most foes with little effort, especially once she has built up her stats. However, she can be inconsistent in dealing damage to her weak skill growth. Unfortunately, she is incredibly frail physically and can easily fall to most physical units given her poor HP and Defense growths. Even though her Resistance is just slightly better, any sort of damage taken is extremely bad for her. As such, leaving Nyx alone and/or exposed to threats is a bad idea. If there is no possible way to avoid it, leaving her exposed to Magic users is the safest route as at least her personal skill Countercurse deals back half the damage she received from them. Nyx starts off in both routes she's available in with Heartseeker, dropping adjacent enemies' Avoid by 20, making it much easier for her to hit them, though the risks in allowing herself to get within close range should be considered carefully unless engaging a bowman. At level 10, she learns Malefic Aura, further increasing her magic potency with a guaranteed bonus two damage to her attacks.

Nyx's two promotions are the Sorcerer and Dark Knight classes. As a Sorcerer, she sees yet another increase to her Magic as well as her Resistance, while remaining largely the same as her Dark Mage base. Nyx's first skill at Level 5 is Vengeance which has mixed results for her as she needs to be injured in order to gain the damage boost from the skill, so even with the high activation rate, unless the player is willing to leave her wounded, it requires some investments of Seraph Robes, Dracoshields, and Talismans to make it both meaningful and safe to use. At Level 15, she gains Bowbreaker, which is a good skill as it lets her become an anti-bow unit which, given the Tome's weapon type advantage over Bows, is a worthy investment to give her a more specialized unit role or at least give her more lenience options if being purposefully exposed in battle. The Dark Knight class brings all of her stats to at least middling growths, giving her HP and Skill at least a decent chance to gain stats and a bonus 10% to Defense which, while still quite low, has better chances of increasing than in the Sorcerer. She loses some of her Magic growths in the process, but it still is strong enough to reliably increase as she trains. The Dark Knight's advantage is the access to Swords, though her Strength is lacking for dealing meaningful damage unless using a Levin Sword to use her Magic, and most importantly the increased movement range. Nyx first learns Seal Magic at level 5 which cripples enemy mage units' Magic by 6, allowing her allies or herself to engage such units a little more safely. At Level 15, she learns Lifetaker, her best regeneration skill as her solid magic attacks can kill most enemies, thus activating this skill and regaining any health she had managed to lose without dying.

Nyx's secondary class is the Outlaw which does not suit her in the long term as an alternative route given the poor Strength growths. Shining Bows are her best options offensively. She learns both Locktouch and Movement +1 from the Outlaw base, the latter of which is the most useful as increased movement means that she can both engage enemies and retreat away from them farther than normal. The Outlaw class is nonetheless a useful option in the short term for increasing her skill growth, shoring up arguably her most major weakness.

The Adventurer class also allows her to use Staves and Rods for a more potent healer than Niles and Anna. Nyx learns Lucky Seven, increasing her Hit Rate and Avoid for the first 7 turns of a map. This is an excellent skill for Nyx as it helps make up for her weak skill and luck growths. She also learns Pass to either aid with escaping from enemy swarming or to engage in the player's own swarming tactics. Bow Knight provides little worth to Nyx as a permanent class as the lack of Magical equipment options makes it a hard sell for her, but at least the skills it provides are useful. Rally Skill gives her allies a stat boost in Skill whenever she is not within range to attack any enemy safely or at all. Shurikenbreaker cripples Shuriken users like Ninjas and Maids, combined with a Calamity Gate makes her a difficult target to hit apply stat reductions on while alleviating Nyx of the weapon's advantage over her both her base class' usable weapons.

Nyx can A+ support with Mozu, Effie, and Charlotte, as well as Orochi in Revelations. 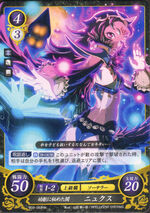 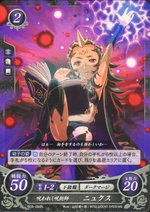 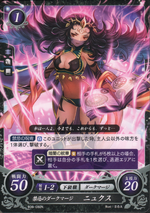 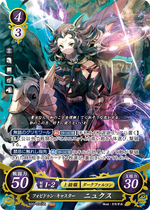 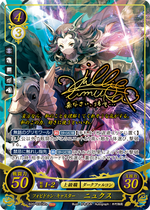 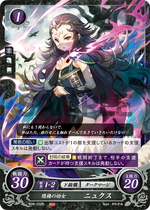 Nyx is named after Nyx, the Greek goddess of the night.