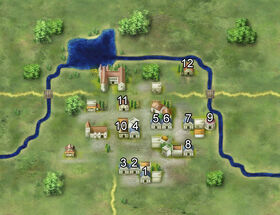 Aside from the two recruitable characters, this map has no enemies, and is mostly useful as preparations for the following map, which is much more difficult. Since Map 16 is a frontier map, a good idea would be to use the Frontier Fighter training building to give the skill to whoever the player expects will be doing combat in the next map.

If the player did not bring Mahter in Holmes's party, they will have to seize without killing them (this is extremely easy as your units can't counter-attack against them and the girls have low stats and aren't a big threat). It's also suggested you visit the church with Attrom so you can recruit Lyria, who is incapable of combat but is the only playable character who can use the Strength Staff, which will increase the strength of a selected player unit by 10 for the remainder of the map.