Oath of the Dagger 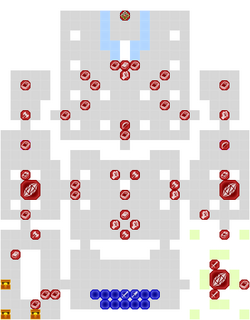 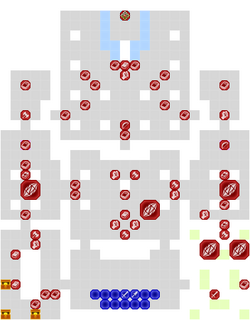 Byleth, Dimitri and 10 others

Chapter script
[view]
“After storming the streets of Enbarr and bringing Imperial forces to their knees, the Kingdom army surrounds the Imperial palace. But the enemy that awaits them there is not the Edelgard they once knew...”
—Opening Narration

Oath of the Dagger is the twenty-second and final chapter of the Azure Moon route of Fire Emblem: Three Houses. The chapter consists solely of a mission in the Imperial Palace at Enbarr, Infernal Clash at the Capital.

Having seized Enbarr, Dimitri, Byleth, and the Blue Lions storm the castle where Edelgard awaits. Willing to use any means to win the war, she unleashes the power of her crests, transforming into a grotesque creature of unparalleled power, but maintains full control over her monstrous form.

The battle is long fought and hard, but ultimately Dimitri emerges victorious over Edelgard, causing her form to dissipate. Dimitri offers one last chance for Edelgard to submit peacefully, but she instead throws the dagger Dimitri returned to her, prompting him to kill Edelgard as the dagger pierces his shoulder.

With the death of the Emperor, peace is restored across Fódlan as the Adrestian Empire is merged into the Holy Kingdom of Faerghus. With all of Fódlan united under the rule of Faerghus, Dimitri becomes the first king of the united continent. Rhea is rescued from imprisonment, but is too weak and is forced to step down as Archbishop of the Church of Seiros. Byleth takes over the mantle and together with King Dimitri, peace is restored.

Every turn after entering the throne room, a War Master will appear from the central stairs. This will continue indefinitely until every enemy in the central and throne rooms except Edelgard and the Bishop are defeated.

This is the final battle of the Azure Moon map so do not be stingy with any remaining resources available including funds and forging materials. It is better to deplete your funds and forging material to ensure that your units are absolutely prepared for this battle as it mirrors the previous map. Nothing aside from Renown carries over so splurge on whatever you deem necessary to complete this map. As the map is the final one, do not worry about Weapon Usage as the weapons will also not transfer either so use them as you see fit to push your way to the final goal of defeating Edelgard.

The map is filled with high ranged enemies using a Fire Orb on the left side of the map and a Balista on the right side of the map. as well as a few Gremory using Meteor. These are usually the most problematic enemies and should be dispatched as soon as possible. Killing the former two as soon as possible and baiting out the latter is advised much like the previous map. The other problem on the map is Edelgard herself. She will constantly be assailing your allies throughout, the battle with a massive ranged assault. She will launch two of these attacks each turn, however, she will not target the same unit twice in the same turn. It is worth noting will always target Dimitri first if he is in her range, unless Dimitri is an Assassin or Trickster, in which cases he will never be attacked by Edelgard.

The player has three routes to get to Edelgard either charging the middle, left, or right side of the map. Dividing the army into two to charge the side routes then converging the middle or having all rush one side are solid strategies to effectively split and conquer the sides quickly or combine and conquer the routes slowly, but with more unit options when taking down a side. Regardless of choice of strategy dealing out the nearby starting rooms of the routes on the left and right will provide some chests with useful items on the left while the right has Myson, a powerful mage who is commanding several knights. He is deep in the room, protected by another mage and a Demonic Beast making it difficult to engage safely. He carries Bohr Χ which will reduce your unit's HP to 1 if it hits and can attack any ally unit within 3-10 spaces. He will not move from his starting spot and the spell could be evaded with a character with high enough Speed and Dexterity like a Falcon Knight Ingrid. He can also cast it infinitely so one can only stop his assault with his death. One could also have two characters use their Warp and Rescue spells, respectively, to put an ally who can kill Myson in a single round next to him then immediately withdraw them to safety, sparing some of the risk of leaving an ally alone in the room with the Demonic Beast. Another alternative is using the Retribution gambit to counter Myson (and other enemies with ranged options, except for Edelgard who cannot be countered this way) on a unit outside of other enemies' range and are capable of one-rounding Myson, Quick Riposte is especially useful with this tactic as it guarantees two attacks on enemy phase. Regardless, defeating Myson will cause the units affiliated with Those who Slither in the Dark to disappear from the map, saving the player more trouble later; this means that if one plans to kill Myson it is best done early on with strategies that increase mobility such as Warp, Stride, Canto, Rescue or any combination of these.

Since the enemies on this map are mostly Tome users, it is very advised to bring a purpose-built Res tank who can easily sponge and bait the Gremories around the map. 54 Rsl is necessary to take no damage from Meteor on Hard difficulty; this can be achieved with a base Res of 47 and a battalion that gives +7 Rsl such as Nuvelle Fliers Corps. Such a high base Res will be difficult to attain, however, and one must be studious with allocation of stat boosters that boost Res and should also use a cooking effect that boosts Res in the final month. As well as this, shields such as the Hexlock Shield grant another Rsl boost of +4. Suitable candidates for this role include Linhardt, Mercedes, Marianne and Flayn due to their very high Res growths and bases; regardless of who one chooses, however, one will have to prepare for this role from a while ago in the game at least. One might also notice that the other units on the map are ones with great physical might such as War Masters with Gauntlets and Brave Axes who will easily kill resistance-heavy units baiting out Gremories. A good strategy for removing these units is to attack from range using characters with Bolting or Meteor (such as Hilda or Manuela) or Bow Knights with the ability Movement +1 and Failnaught/Longbow to retreat out of range of the Gremories (the best candidate is Leonie). One must also be careful to stay at the edge of the Mortal Savants' ranges with their Res tank as they will use their dangerous Wo Dao or Brave Swords on them if given the chance.

Once the player has reached the final chamber with Edelgard with Dimitri, the battle is fairly straightforward, assuming all other enemies are dealt with. She loses her massive range, instead reducing it to 5 tiles. This is in combination with her Counterattack skill, making her only weaker on Enemy phase; it is very difficult to have the Mov to attack her and retreat before leaving her range anyway. She has four health bars, which means that she will not go down easily. As mentioned above, being stingy with your weapons uses are no longer advised and any means to severely reduce her health is advised. However, it should be noted that she will gain stats and more maximum health with each bar depletion. Gambits can help to shatter her singular shielded tile but may help open the door for devastating damage if you are able to break them. Note that unlike most monsters, when her shield is broken she will not be dazed for a turn and will still act as normal, albeit weaker. Mercedes and Flayn if one or both are deployed become useful in this situation, and in the map in general, as Fortify provides massive, widespread healing and can do so safely out of her range. Edelgard will occasionally use a huge Area of Effect gambit like attack around her, making the Faith spell even more useful. Otherwise, Mercedes has Physic for a single target ranged Faith healing while Flayn can Rescue a vulnerable target.