Oboro's Spear is a Naginata that is introduced in Fire Emblem Fates.

Eponymously named after Oboro, Oboro's Spear is a very powerful weapon in terms of Might and grants an inherent critical bonus, but has difficulty executing follow-up attacks. The naginata also reduces its wielder's Strength and Skill post-battle, further dampening its combat viability.

The spear serves as Oboro's personal weapon in the spin-off titles Fire Emblem Warriors and Fire Emblem Heroes. In Heroes; Oboro's Spear functions as an enhanced Slaying Spear, granting her effectiveness against Armored units. If the weapon is given an effect refine, it further gains the effect of Close Defense 3, boosting her Defense and Resistance by 6 during combat with melee-range foes.

The naginata (薙刀), was a polearm used by samurai. It was essentially a spear with a curved blade. The naginata is one class of the Nihontō (日本刀), Japanese bladed weapons. 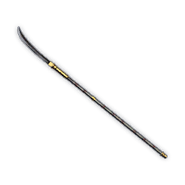 Model of Obor's Spear from Warriors.