Spear Fighter
[view]
“You're right. I can't stand these Nohrian scum. If they've done ANYTHING to harm our master... I don't know what I'll do.”
—Oboro, Birthright Chapter 9: Land of Gods

Oboro (オボロ) is a playable character in Fire Emblem Fates on the Birthright and Revelation routes. One of Takumi's personal retainers, Oboro is a Hoshidan Spear Fighter who bears an unquenchable thirst for vengeance against Nohr for the death of her parents.

Oboro is voiced by Nozomi Sasaki in the Japanese version and Marisha Ray in the English version.

Oboro's family once owned a well-known kimono shop that bore strong connections to the royal family of Hoshido. These connections proved to be fatal to her parents, as the political and economic influence that they gained caused them to attract the attention of Nohr, resulting in them being ambushed and killed by a Nohrian assassin when they were en route to Nohr on a business trip. Oboro survived by hiding in a cart, and she was thereafter taken in by relatives who worked directly for the Hoshidan nobility. Through this connection, Oboro eventually learnt how to wield the Naginata, thereafter enlisting as a soldier in the Hoshidan army. Some time after her enlistment, Oboro was appointed as one of Prince Takumi's personal retainers.

Oboro first appears in Chapter 9 alongside her fellow retainer Hinata in the castle interior of Izumo, where they attempt to locate Takumi after he is separated from them. They instead run headlong into a conflict that had broken out between the Avatar's army and a group of Nohrian soldiers led by Zola prior to their arrival. When the Avatar speaks to Oboro, she will mistake them for being Nohrian due to their history and appearance, but after they explain their situation to her, she decides to join their army.

Oboro subsequently aids the Avatar's effort to put an end to the age-old conflict shared between Hoshido and Nohr.

Oboro first appears in the Port Town of Dia in Chapter 10 alongside Hinata and her liege. Deployed on a mission to the port, the three lead an army in an attempt to prevent the Avatar's army from making their way to Notre Sagesse by blocking off all access to the ferries leaving port. When Oboro encounters the Avatar in battle, she will immediately assume her signature demonic facial expression before apologising for being tasked to personally slay them. Despite the efforts of the Hoshidans, they are eventually defeated by the Avatar's army and forced to retreat.

Oboro appears once more in Chapter 23, where she and Hinata aid Takumi in defending the Great Wall of Suzanoh from the advance of the Avatar's army. Positioned on the wall walk itself, Oboro makes her last stand but is overpowered by the Avatar's forces and falls in battle. In her final moments, she reveals the love that she harbours for Takumi, expressing regret at not having admitted her feelings to him.

Oboro first appears in Chapter 10, where she, Hinata and Takumi are captured by Zola and a small band of Nohrians in Izumo. After the Avatar defeats Zola and liberates Izumo, Oboro and the others are released. After hearing Izana's prophecy, Takumi decides to join the Avatar's army, bringing along Oboro and Hinata with him.

In her supports with Beruka, which can only be accessed through the Revelation story-line, Beruka accidentally hints that she may know something about the death of Oboro's parents. After tracking down the ex-assassin, Oboro interrogates her only to find out that it was Beruka's mentor and foster father that killed them, the reason being that their kimono business was booming and had ties with Hoshidan nobility with Beruka commenting that "it's natural that powerful figures in Nohr would want them dead." Filled with anger and vengeance Oboro tries to extract the assassin's whereabouts out of Beruka only to find out that she had already killed him as part of a contract. In turn, Beruka volunteers to die in his place because she killed the object of her hatred and said hatred would be transferred onto herself, thus Oboro needs to get revenge on someone if she is to go on. Oboro passes stating that acting on her hate will only lead to tragedy and would much prefer to fight along side her than against her in order to bring peace to which Beruka agrees.

Oboro subsequently aids the Avatar's effort to put an end to Anankos' machinations.

Should she survive until the endgame in Birthright and Revelations, her ending states that she reopened her parent's tailor shop regardless if she is married or not.

Oboro harbours a chronic hatred of Nohr, a fact that stems from the murder of her parents by the hands of Nohrian assassins. This resulted in an involuntary tic that causes her to twist her face into a demonic visage whenever anything related to Nohr is mentioned or shown in her presence. Despite her hatred for Nohrians, Oboro is capable of controlling herself from killing them depending on circumstance; through her C support with Silas, she declines his offer to train with him, attributing her refusal to her not wanting to kill him by accident. Even when she finds out that her parent's murderer was already dead at the hands of Beruka years ago, she is still capable of reason rather than blind rage, knowing that the chain of hate always ends in tragedy. That said, Oboro is not without the sense to understand that not all Nohrians are evil, and can clearly tell the difference enough to make civilized conversation and establish friendships and romances with a number of them.

Oboro copes with the loss of her beloved parents through her involvement with the Hoshidan army, a fact that has led to her sharing very strong, tenacious bonds with many members of the army. In particular, she is especially attached to her liege, Takumi, having romantic feelings for him, but is too shy to admit them to him. When dying in Conquest, she even laments that she never revealed her feelings to him. This does not equal to her ignoring the rest of the army, however, as she's often seen taking a mother-like role to them: she can recruit Kaze's help to make sure there will be no mice near their supplies, teach Rinkah to eat less messily, ask Kaden for collaboration to braid silk threads into cords, check on Ryoma 's health and specially his sleeping habits, etc.

As the daughter of Hoshidan tailors, Oboro is an expert fashionista and is shown tailoring to other members of the army through her supports. Her fascination with fashion does have the tendency to be excessive to the point of being forceful, if not relentless, into having her way; this fact can be observed through her supports with Saizo and Mozu, where she persists on crafting newer and flashy clothes for the two to wear despite numerous protests and having to chase them both down in the B-Support conversations of both people.

Oboro is the first and only first-generation Spear Fighter recruited in both Birthright and Revelation barring reclassing. For the most part, Oboro's stat growths are average across the board, with only her Magic and Resistance sporting moderately low growths. This makes Oboro very reliant on her level ups to define the role that she is best suited to perform; depending on her growths, she can either act as a frontline attacker, defensive wall, or a combination of both. Oboro is one of the best defensive wall candidates in Birthright due to the lack of defensive Hoshidan classes, alongside the fact that the Naginatas that she primarily wield increase her defensive stats by 1. Her personal skill, Nohr Enmity, increases her damage by 3 if facing a Nohrian unit. This gives her attacks more sting, making her more proficient in combat in Birthright and causing her to be a dangerous foe to face in Conquest. In Revelation, Oboro is strong in the earlier chapters thanks to this skill, although after Chapter 18, the skill's usefulness decreases as the spread of Hoshidan and Nohrian class enemies even out, leaving her only strong against certain enemies.

As a Spear Fighter, Oboro can learn Seal Defense, a skill that is great for whittling high-Defense units like Wyvern Riders and Knights. Swap, learnt at level 10, is a decent utility skill that allows Oboro to bring vulnerable units like Setsuna and Takumi into cover if they are exposed to too much danger on the battlefield.

As a Spear Master, Oboro does not change stat-growth wise, and will only benefit from the increased stat caps and the ability for her to bring her Lance/Naginata prowess to its maximum. Seal Speed is one of the skills she can learn, allowing her to cripple high Speed enemies like Samurai, Thieves, Ninja, and Sky Knights. Lancefaire, conversely, boosts her damage output with a Lance/Naginata by 5, further complementing her proficiency with these weapons.

As a Basara, Oboro is able to wield both Tomes and Scrolls for more offensive flexibility. While her other stats remain much the same as when she is a Spear Fighter, her Magic growth remains quite low, preventing her from being able to maximise usage of magic. This class does have its merits, one of the most prominent being the Rend Heaven skill that it allows Oboro to learn. With this skill, she can take half of her enemy's respective offensive stat and add it to hers. If Oboro has been blessed with high Strength, she can use this skill to become an effective brawler, exploiting her enemies' strong offensive stats to her advantage. Oboro can also learn Quixotic, a skill that gives her 30 points to her Hit rate and increases her skill activations by 15. This skill is a double-edged sword as it also gives her enemies the same benefits as well. To maximize its benefits, having Oboro with a few offensive skills can help compromise the assistance it gives to the enemy.

Oboro's secondary class set is the Apothecary, tied with the Merchant and Mechanist classes as its promotions. For the most part, the Apothecary class gives Oboro more of a focus on utility with the skills that it is defined by, as they require the usage of potion items like Vulneraries and most tonics to activate. While they may initially be useful, it is best for them to be eventually swapped for other more coveted skills.

As a Merchant, Oboro regains access to Naginatas and Lances. This class's base skill helps to give the player extra Gold Bars with Profiteer, which can be paired with Spendthrift to boost Oboro's battle proficiency.

As a Mechanist, Oboro can learn Golembane, although this skill is not very useful due to Stoneborn and puppet-based units appearing in very sparse numbers throughout the game. She can also learn Replicate, a skill that allows Oboro to create a clone of herself and lend her battle prowess to two different places on the battlefield at once. While risky, as long as both the original and the clone are well-maintained in terms of HP, Oboro can effectively utilize this skill in tandem with Seal Defense or Seal Speed obtainable from her primary classes, allowing her to assist her comrades in killing even the strongest bosses with ease.

Oboro means "Hazy," "Dim", or "Faint". It is also the name of an Imperial Japanese Navy Destroyer.

Artwork of Oboro from the 4koma Book.

Artwork of Oboro and Saizo.

Oboro as a Spear Fighter in Fire Emblem 0 (Cipher).

Oboro as a Spear Master in Fire Emblem 0 (Cipher). 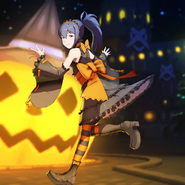 CG artwork of Oboro in the Nohr Festival DLC episode. 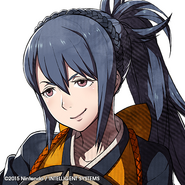 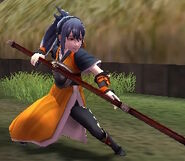