∞
[view]
Odin's Grimoire is a Tome that is introduced in Fire Emblem Fates. Eponymously named after the Dark Mage Odin, Odin's Grimoire conjures a crimson bolt of fell energy to impale a selected enemy target when used in battle.

Odin's Grimoire can be considered a harder-hitting, less consistent variant of the Mjölnir tome. Though it possesses the higher might, Odin's Grimoire has lower hit and critical hit rates than Mjölnir. Additionally, it cannot perform follow-up attacks, and it reduces the user's critical evade rate by 20 points whenever it is equipped—Mjölnir does not inhibit its user in either of these ways. However, Odin's Grimoire does not lower Avoid by 10 points, unlike Mjolnir.

Odin channelling the power of Odin's Grimoire towards an enemy Malig Knight. 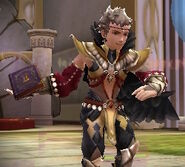