Mercenary
[view]
“My hometown? Well... It was just an ordinary village. We were poor... The reason I came all the way out to the city was to make money to feed my younger brothers...”
—Ogier to Lilina in a support conversation

Ogier is a playable character in Fire Emblem: The Binding Blade. He is a Mercenary from Lycia hired by Ostia. He can be promoted to a Hero during the game, depending on the player’s preferences.

Ogier joins a band of Ostian soldiers in order to pay for his impoverished family’s meals. However, because his physique and ability was incompatible with being part of the heavy knights, he instead chose the path of a mercenary. He joins Roy's party alongside Gwendolyn and Barthe, aiming to save Lilina and defeat Leygance in order to hand the Ostian throne to its rightful owner.

After the war with Bern, he traveled the world as a mercenary.

A somewhat reserved person, Ogier often comes off as shy and respectful to others, considering them to be of higher status than himself as he came from a dirt poor family, though Bors comments that while that sort of mundane reason to fight is usually looked down upon, it was still also a legitimate reason to fight.

Ogier is also greatly motivated to train himself in order to protect everyone else, as he and Gwendolyn train to become stronger than the other in their supports as they work tirelessly to bring an end to the war.

Joins automatically in Chapter 8 on Turn 6.

Ogier is essentially a significantly weaker version of Dieck due to his later join time and inferior base stats. On his join chapter, he will usually die in two hits to most enemies on Hard. He does boast somewhat higher growth rates in certain stats, particularly Speed. Ogier does start out wielding swords, which is easily the best weapon type for him to use, as not only are they accurate, but he joins directly before the Western Isles, which are very axe-heavy. This improves Ogier's survivability during that period, which means he can pick up the occasional kill or level. He has a lower Constitution than some other characters capable of using axes, but if he has reached the point where he can use them, his Speed should compensate.

Unfortunately for Ogier, he lacks much in the way to justify the trouble of leveling him. By the time he joins, the rest of the army is beginning to hit its stride, and the work of leveling him will only slow them down. He also provides no real utility or advantages compared to other characters, as a simple footlocked swordsman. Competition for Hero Crests is another issue for him; at his join time, the army has accumulated four other characters who need one, with another three joining in the following two chapters. At a time when Rutger and Dieck may be eyeing their promotions, the player has no real reason to deploy and level a unit that is much worse than them upon joining, and does not significantly outclass them when trained.

Ogier - The Little Hero (小さな『勇者』 Chiisana “Yūsha”)
"Ogier continued to travel around the world as a mercenary, and his name gradually spread across the continent as a great warrior. Even in his fame, he kept the utmost respect for his comrades in the war, saying that he never would have gotten as far as he did without their help."

Ogier is illustrated in the trading card game Fire Emblem Cipher with the following cards: 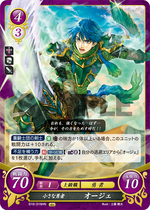 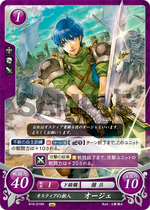 Ogier the Dane was a legendary character who first appeared in The Song of Roland, a French medieval series of poems which the Elibe games reference often. Additionally, the word "ogier" means "stallion" in the Polish language.

Artwork of Ogier in Fire Emblem 0 (Cipher) by Karuta Shiki.

Artwork of Ogier in Fire Emblem 0 (Cipher) by Karuta Shiki.

Ogier as a Hero in Fire Emblem 0 (Cipher).

Ogier as a Mercenary in Fire Emblem 0 (Cipher).

Ogier's portrait in The Binding Blade.

Ogier as a Mercenary in The Binding Blade.