Chapter 4: Joy and Sorrow (Mystery of the Emblem)

Prologue VII: The Final Test or Chapter 4: Joy and Sorrow (New Mystery of the Emblem)

[view]
“Do me a favor, and leave the dangerous fighting to me and my men.”
—Ogma to Caeda in a conversation in Shadow Dragon.

Ogma is a playable character from the Archanea Series of Fire Emblem. The hard-edged captain of a group of mercenaries comprising of Barst, Bord and Cord, Ogma is also the personal bodyguard of Princess Caeda of Talys. He appears to share a rival-based relationship with Navarre, one that sees the latter constantly seeking opportunities to engage the former in duels.

Ogma was born in Pyrathi as the son of a lower-ranking Archanean nobleman and a Grustian-born lady. During a political strife that broke out in Pales, Ogma's father was executed, and Ogma and his mother were left to fend for themselves. Tragedy later struck once again, as Ogma's mother perished in an attempt to protect her son, and he was later forced to become a gladiator in Knorda as a means of subsistence. During his stint as a gladiator, Ogma was captured and severely tormented for aiding in the escape of his fellow gladiator Samuel. In the midst of his torture, Princess Caeda intervened and halted his tormentors, later granting him the opportunity to escape from his life as a gladiator by appointing him as one of her personal bodyguards. From this point onwards, Ogma swore eternal fealty to Caeda, in gratitude for having extricated him from the mires of despair. At some point after he was given a new lease of life, Ogma stumbled upon Malice and Dice, who had collapsed on an unnamed road and were about to die from starvation. He saved them by giving them some food, although when reminded of his act of compassion much later, he had no recollection of it.

Alongside Barst, Bord and Cord, Ogma is handpicked to function as the bodyguard of both Marth and Caeda. Joining Marth's army in Chapter 2 of Shadow Dragon and the Blade of Light, Ogma then aids Marth in bringing the War of Shadows to an end, before returning to Talys to serve its people.

Some time after the conclusion of the war, upon learning that Caeda is engaged to Marth, several Talysian clans rise up in revolt, embroiling the country in a civil war. The events of Downloadable Episode 3 of New Mystery of the Emblem are then incited, where Ogma leads Bord and Cord on a mission to save Caeda, who has returned to the country to visit her father. Midway through the ensuing battle, however, Ogma is ambushed by Navarre, who intends on settling an old score through a duel. Caeda later enters the scene with Norne, whereupon she rushes to Ogma's aid by convincing Navarre to defect to her cause. During the same battle, Ogma manages to enlist the aid of Malice and Dice, both of whom intend to repay the debt that they owe to him for saving their lives many years previously. After the remainder of the hostile stragglers are routed, Ogma, in a rare display of emotion, tenderly expresses his gratitude towards Caeda for having both saved him from the clutches of despair and restored his faith in humanity, before bidding her to live happily as the wife of Marth.

Chronologically, Ogma reappears in his version of Prologue VI of New Mystery of the Emblem, where he aids Cain in instructing the 7th Platoon in warfare. After he is bested in the ensuing training session, he offers to aid the 7th Platoon in completing their stint as trainees until they are officially recognised as knights at the end of Prologue VIII.

Later, Ogma appears in Chapter 1, where, under the behest of General Lorenz of Grust, he makes his way to the fortress that Lorenz is stationed. Here, Lorenz makes the request for him to escort the Grustian royal twins, Jubelo and Yuliya, to Wendell in Macedon. He is unable to fulfill the request, however, due to Yuliya's adamant refusal to abandon Lorenz, and thereafter promising to find a way to aid him, departs. Jubelo and Yuliya are later captured by Lang, although Ogma succeeds in infiltrating his castle and escaping with them around the same time as when the events of Chapter 3 take place. Later in Chapter 4, when Ogma catches wind of the imminent arrival of Marth's army from the southwestern reaches of Holm Beach, he, alongside a mysterious knight named Sirius, protects Jubelo and Yuliya from the assault of the Macedonian Vikings and leads them to the army. In Chapter 5, he gets a surprise encounter with his old subordinate, Barst, now living an ordinary life as a woodcutter, and requests him to lend his strength to Marth's cause once more, in which Barst immediately complies and accompanies him in eliminating Lang. Later on, in Chapter 6, Ogma reunites with Samuel, but not before mistaking him for Navarre. After clearing up the misunderstanding, Ogma convinces Samuel to join Marth's army. Ogma continues to aid Marth in ending the War of Heroes, later disappearing from the records of history thereafter.

Ogma appears in Chapter 6 during the second trial to acquire the Opera of Light: Fire Emblem as one of three boss Mirages. He fights alongside Jagen and Palla.

Ogma is one of the more solid units in the original Shadow Dragon. His bases are very high, he boasts an excellent weapon type in swords, and while his growths are not very high, they are sufficient to keep him useful throughout the game. His high growth in Weapon Level is the only growth he particularly needs, as it will enable him to use strong weapons like the Killing Edge or Silver Sword very quickly. He is a reliable frontliner from start to finish, with his only significant downside being his lack of a mount. Ogma is often compared to his fellow mercenary Navarre, due to Ogma's slightly better bases versus Navarre's slightly better growths, but in truth, the two are very similar stat-wise, and can be more or less used interchangeably.

Ogma in Mystery of the Emblem has gained a number of small buffs in the stat department compared to his NES counterpart (and a rather large buff in Book 2, where he joins with even better bases), and a few advantages due to game design, such as being able to wield Mercurius in the late game. However, the the biggest change in Ogma's favor is the presence of dismounting. While the cavalry must leave their steeds behind and suffer movement or stat loss in the process, Ogma remains equally proficient indoors or out. As before, Ogma is a great unit, between his strong statline, serviceable growths, great availability, and good weapons. It is difficult to go wrong with him.

In Shadow Dragon, Ogma is a very good unit in the early game, as he can double attack most enemies with an iron sword, even on harder difficulties, and has perpetual weapon triangle advantage. However, as the game goes on, his usefulness will eventually wane. Swords are not a good weapon type, since most enemies later use lances. They also lack effective damage against cavalry, which is a very common enemy type, and available 1-2 range. Besides that, Ogma's doubling capabilities become worse and he will only attack twice infrequently. All is not lost for Ogma, however, as he can still a decent, if slightly average, combat unit. He can support 4 different characters and wield the Killing Edge, Armorslayer or Wyrmslayer at base, which can also help him. Once he reaches his promotion, however, his former glory will be restored, as it grants him a durability boost, makes him double a few more enemies and gives him axes, which will give him 1-2 range and more weapon triangle leverage. Care must be taken to raise his axe rank quickly, though, as it starts at an E. In all, Ogma is very strong early game, gets a bit more average during the mid and becomes pretty strong after his promotion. If the player wants a strong hero without reclassing, Ogma is probably the best choice, as he is much easier to train than Caesar and will have similar stats, but also has higher growth rates and levels faster than Astram or Samson.

Loyal Blade
A mercenary who was once a slave gladiator. Serves Princess Caeda of Talys. Appears in Fire Emblem: Mystery of the Emblem.

Blade on Leave
Mercenary of Talys. Following Caeda, who had saved his life, he's come to pay a visit to the summer's warm sands. Appears in Fire Emblem: Mystery of the Emblem.

“The battle field is the only world I know!”
—Ogma's battle quote

Ogma plays a fairly important role in the canceled OVA of Fire Emblem. He first appears during the pirate attack at Talys, where he saves Marth and Caeda in a duel with the pirate Gazzak. When Marth's army reaches Galder, Ogma has a brief flashback of when he was once a gladiator, recalling the day Caeda saved his life from his tormentors. At the end of the last episode, Ogma engages Navarre in a sword duel. Before they engage in the battle, Ogma mentions that he has heard of Navarre and his style of fighting with two swords. The fight is abruptly halted when Caeda enters the scene and stands between the two of them. She then pleads with Navarre to stay his hand, a fact that convinces both combatants to withdraw their weapons. 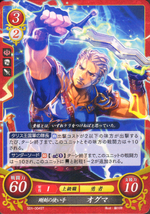 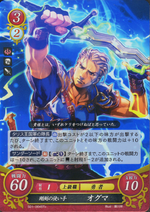 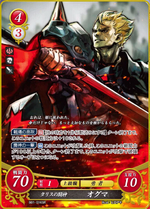 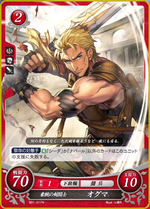 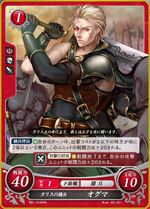 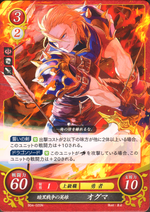 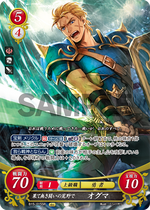 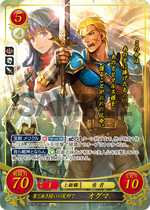 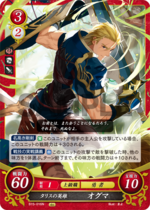 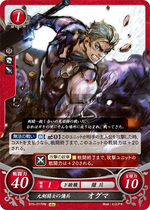