Paladin (Second Generation)
[view]
“We abandoned Sir Sigurd's army right at the battle's peak. It's not something I'm proud of. But the mission awaiting us was a fate worse than death.”
—Oifey to Fee

Oifey is a playable character from Fire Emblem: Genealogy of the Holy War. An experienced tactician who takes after his grandfather Lord Sesar, he initially serves Sigurd as an adviser throughout the game's first generation. In the second generation, he acts as a guardian to Sigurd's son, Seliph.

He carries the blood of Crusader Baldr, so he is a distant relative of Byron, Sigurd, Seliph, Ethlyn, Altena, and Leif. Oifey is 14 years old at the first generation and he is 33 years old at the beginning of the second generation.

When Grannvale is suddenly invaded by Verdane, Oifey asks Sigurd if he can fight alongside him and the other knights still residing in Chalphy. Once he is told that he is too young for warfare, Oifey convinces Sigurd to allow him to act as an advisor instead. He continues to assume this role until the capture of Lubeck Castle in Chapter 5, when he is asked to escape with an infant Seliph. He also convinces Sigurd to let Shannan accompany him, stating that his presence would put him more at ease in Isaach, whose people are hostile to those from Grannvale. Before he leaves, he forces Sigurd to make a promise to come for him once the war is over. However, this is never fulfilled due to the events of the Battle of Belhalla.

With the help of Shannan and Edain, he raises Seliph and the other younger initial members of the Liberation Army in secret for the next seventeen years. He also teaches swordplay to Diarmuid/Tristan. He is accompanied by Shannan and the two of them travel to Isaach, where they remain in hiding for the next seventeen years. During this time, he learns about Sigurd's demise and begins to feel shame for leaving his side. Before the second generation begins, he leaves the Liberation Army's hideout in Tirnanog along with Diarmuid/Tristan and Lester/Deimne to witness the situation of the other countries on Jugdral. When they return, they find Seliph, Larcei/Creidne, Scáthach/Dalvin, and Lana/Muirne in battle against the army of Danann, the tyrannical ruler of Isaach. From that point on, he fights alongside Seliph to liberate the continent from the Grannvale Empire. In Chapter 7, he can give training advice to Diarmuid/Tristan. If he is paired up with Fee, they will have a lover conversation in the Final Chapter.

In the ending, Oifey reveals that he was orphaned and taken in by Sigurd, who was like a brother to him. He also expresses his shame for not being with Sigurd during his final moments and cries in front of Seliph. After this, he returns to Chalphy to become its next duke, as he is the only descendant of Baldur who can assume this position.

Oifey, like many Pre-Promoted units, starts out quite strong in comparison to other units in Seliph's army. However, unlike many other pre-promoted units from other titles in the series, Oifey is strong even for an early pre-promoted unit due to his well-rounded and solid starting stats, good growths, high mobility, and offensively potent Pursuit and Critical skills. Also unlike many other pre-promoted units, his overall potency remains consistent as he gains in level. He can use any non-Holy sword, and he has access to Javelins. In terms of his overall design, he ends up being very similar to Sigurd, minus the Tyrfing and the ability to seize, but with a higher starting level and Critical. One of his best traits is his durability; 40 HP and 17 Defense is superb, 8 Resistance is at least above-average, and with lightweight swords and 16 Speed, his Avoid is nothing to scoff at. He can even use magic swords very competently, due to a high 9 Magic, making him good for clearing out squads of enemies with a Light Brand.

It is worth noting that Oifey will ultimately likely wind up being a weak unit compared to almost everyone else in the second generation once they catch up to him in levels simply due to the insane potential that most children have. Their Holy Weapons, promotion bonuses, skills, and high stat growth potential will present a clear divide between them and Oifey as the game progresses. This is not to say that Oifey is a bad unit, though; he is just a giant among titans, so to speak. If, however, your second generation units primarily consist of substitute characters, Oifey will likely wind up being among the strongest of them aside from those that wield Holy Weapons.

In Chapter 6, Oifey may speak to Seliph, but nothing will result.

In Chapter 7, Oifey may speak to Diarmuid/Tristan, resulting in either one gaining one point of strength, skill, and defense.

In Chapter 10, after Chronos Castle is captured, Oifey may speak to Seliph, and he will gain three points of HP.

In the Final Chapter, if Oifey is in love with Fee, she may speak to him and he will gain three points of skill.

“Sir Sigurd, I'm so sorry... ...I'm already...”
—Oifey's death quote in the second generation of Genealogy of the Holy War

"And finally, at Grannvale, Returned respectively [...] at Chalphy, the Holy Knight Oifey and his wife, [Lover]."

Oifey is illustrated in the trading card game with the following cards: 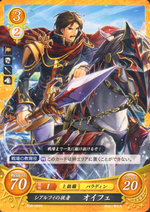 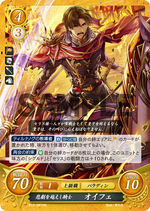 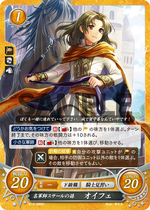 Oifey is a corruption of Aífe (also spelled Aoife), a character from the Ulster Cycle of Irish mythology.