Richard Epcar
[view]
“I am Oliver, champion of beauty! You would harm my precious feathered angels! That makes you my enemy! Unsightly man... Prepare yourself!”
—Oliver to Lekain in Radiant Dawn

He is known as Duke Tanas, and is a senior member of the Begnion Senate who was believed to have been executed for crimes against the state following his defeat at the hands of the Greil Mercenaries in Chapter 17-4 of Fire Emblem: Path of Radiance. He was deeply involved in the Laguz slave trade prior to his defeat in Serenes Forest, having purchased Prince Reyson for an exorbitant fee from King Naesala of Kilvas as though he were but another art treasure for his vast collections. He can be used on Trial Maps after completing three playthroughs of the game.

In reality, Oliver was rescued by Duke Hetzel and that he has since been recovering at his estate in the Dukedom of Tanas.

During a sudden storm on their way to the Tower of Guidance, where they enter Duke Tanas' residence, who turns out to be Oliver. Initially Oliver remains loyal to the Begion state and fights against Ike's forces. Oliver can be killed during the skirmish unless he spots Rafiel amongst the enemy army. Immediately smitten by his beauty, Oliver immediately turns tailcoat and becomes a "defender of beauty" by joining Ike's army, much to their chagrin.

If brought into the Tower of Guidance, much of the Begion Senators are shocked by his appearance in Yune's army. If he survives the war, Oliver retires and becomes a sponsor for many upcoming artists, especially those who made works depicting himself.

Oliver heavily deviates from the general characterization of most playable characters in the Fire Emblem franchise. While his base class is a Bishop (Saint in Radiant Dawn), Oliver displays little, if any, pious behavior. He is highlighted by his misplaced vanity and ludicrously inflated ego in which, contrary to his portly appearance and balding head, he believes himself to be beautiful, once commenting that Reyson struck his "beautiful" nose in Path of Radiance.

Despite his Duke status in Begnion, he has no real allegiance to the state, which is notable when considering that he was spared of Ashera's wrath due to that status. Even his fellow senators are bewildered by his sudden appearance in the Tower of Guidance in Yune's army. This also includes Sephiran, who noted that "Tellius is unraveling at the seams" due to his appearance. Ike, most notably, even politely asked him to return to the enemy army upon his recruitment, something no lord has ever done for any new member of their army. In essence, Oliver's loyalties lie in wherever something that he considers beautiful can be found and serves his own personal best interests.

However, despite all of these negative traits, Oliver is not entirely immoral. While he normally is a coward in the face of danger, he does display an odd sense of courage whenever something that he considers "beautiful" is threatened and is willing to put his life on the line to protect them, though only for that reason. He can be generous in helping out those who pursue the arts by funding them, if only they also do works of him as well.

Oliver joins just before Endgame, and his high magic and weapon ranks look promising, but since Micaiah is force deployed in the tower, he has stiff competition for staves, as staff utility isn't particularly important in Radiant Dawn, and Micaiah will likely have comparable magic and weapon ranks. Furthermore, Oliver's speed is terrible, which leads to him getting doubled by almost all enemies. He is also incapable of using Matrona or the Ashera Staff. In all, Oliver should only be used as a filler unit if the player doesn't have many competent units to enter the Tower of Guidance.

Admirer of Beauty
A member of the Begnion Senate. Cherishes everything beautiful and puts all his effort into the preservation of the arts. Appears in Fire Emblem: Radiant Dawn.

Oliver is a Blue Tome Infantry unit obtained from Grand Hero Battles. Despite the glamorous presense he entails, he is a subpar unit at best, easily outclassed by most units in the game. His Atk sits at a measly 32 and his 20 Spd means that he is unlikely to launch double attacks or dish out heavy damage. His only real notable trait is his decent magical bulk scoring 76 off of his 42 HP and 34 Res. However, he must be wary of physical attackers due to his low 23 Def. At best, Oliver is a decent Magic wall, but as units grew stronger, his position as one has dwindled to merely checking a few select Book I tome users.
Oliver originally wielded the Shine+ tome, which lacks an effect, but has a decent 13 might. Oliver was better off taking an inheritable tome to give him some form of boost to his bulkiness, but he would later become the recipient of a personal tome and a refine. Tome of Favors brings his Atk to a modest 46 and has one of the most unique effects ever. Attacking a foe that is not a Beast unit grants him a Atk/Res+5 buff, bringing both to a total of 51 Atk and 39 Res, great for boosting bulkiness and fueling his Iceberg damage if running that special skill. It also heals him 7 HP after battle, giving him a modest form of self recovery. When refined, as a reference to his love for the Heron Laguz, he can instantly teleport to any beast unit that has the ability to Sing and grants an additional Atk/Res+5 buff. At the moment of the new weapon's release, this makes putting him on a team with either Reyson, Leanne, or Rafiel increases his magical might to a moderate level enough to compete with some modern Book III and beyond units if only in his designated role as a magic tank.
Blazing Light deals damage to enemies in an area of effect and the damage they take are based on the difference between his Atk and their Res without calculating in-combat buffs. While he may not deal the most explosive damage ever, he can still deal some damage to most foes. Mirror Strike grants him Atk/Res+4 if he initiates combat which boost his two strongest stats. Attack Ploy perfectly syncs with his modest Res stat and can inflict an Atk-5 debuff one foes in the four cardinal directions of his starting position of a turn.

Despite the peformance range that Oliver can reach with his refined tome, he ultimately has to have a Beast refreshing unit to achieve this. An enemy team not using them or eliminating them from them enemy team takes away his weapon's biggest benefits. Outside of this, Oliver is easily taken out through his low physical bulk and Spd, making short work of him with even units sitting in the middle of the Spd tiers.

Oliver is best off focusing on soaking magic damage and be defensive as there are far more skill available to him. Distant Defense works nicely to further mitigate ranged damage, especially from mages and he can double up on this as his Skill A and Seal. Reposition or Draw Back are useful Assist skills for their positioning properties. Iceberg is a more consistent damage dealing special that plays off of his solid Res. Quick Riposte grants him a follow-up attack if the foe initiates combat on him when he is over 70% at its third tier.

Vs Mordecai
Oliver: Oh, such a hideous creature! Noooo! Stay back, you filthy beast!
Mordecai: I am Mordecai. I am not filthy...it is your soul that is unclean.

Vs Lethe
Oliver: Shoo! Go away now! Nobody wants a monster feline...Gyaa! Get out of here!
Lethe: You're the type of scum that cause laguz to detest beorc! I'm going to enjoy this, fat man!

Vs Muarim
Oliver: St-stay back! A filthy beast like you...How dare you approach a sanctified personage such as myself!
Muarim: Who is it that decided that a laguz life is worth less than a human? Do you believe the goddess Ashera, whom you claim to worship, would want it to be so?
Oliver: Aaaaaaah! Monster! Hideous, vile monster! You will not defile the name of the goddess!
Muarim: Monster? Which of us is the true monster?

Vs Ike
Oliver: You lowborn, vulgar, penurious vermin! Return my little bird to me! Objects of beauty must be admired! Only by my side can they fulfill the purpose for which they are created!
Ike: I am SO TIRED of listening to your nonsense, you massive gasbag! This ends here and now!

Oliver: Ohhh...you are truly a banquet for the eyes as well as the...spirit. I am quite overcome!
Rafiel: Unhand me!
Oliver: But how is it that anyone could risk a precious treasure like you in battle? What if something marred you?
Rafiel: What are you talking about?
Oliver: Don't worry, pretty bird; I'll save you. You need someone who can give you loving protection. Someone...like me.
Rafiel: ???
Oliver: I would never let them lay a single finger on you, my precious! No, no... The jealous cretins mustn't ruffle a single feather... I'll have to kill them! Come now, come to daddy!

Ike: Hold on a second... Aren't these your men? Why are you fighting them?
Oliver: It's quite simple, really. A true guardian of beauty stands with those who are beautiful. If your exquisite heron prince will not stay here in my home, I must follow him. I have seen death; it holds no mystery for me. Only my pursuit matters. Rest at ease, friends.
Ike: Look...Would you mind rejoining the enemy?

Vs Hetzel
Hetzel: D-Duke Tanas! You've betrayed us? But why?
Oliver: You could never understand the depth of my commitment to beauty! Sometimes it simply overwhelms me. I can't stop the love welling up inside! I'd do anything to keep the hideous likes of you from my precious birds!

Vs Lekain
Lekain: Duke of Tanas... What's gotten into you? Why are you fighting with these mercenary scum?
Oliver: I am Oliver, champion of beauty! You would harm my precious feathered angels! That makes you my enemy! Unsightly man... Prepare yourself!
Lekain: Have you finally gone stark mad? Who, exactly, do you think you're blathering at?

Vs Levail
Levail: Duke Tanas! I thought you were executed as a slave trader three years ago.
Oliver: True beauty is immortal. Look at me. Right now, I am flawless. You are not without potential. With education, you could aspire to be me.
Levail: ...No, thank you.

Vs Sephiran
Sephiran: Duke of Tanas, imagine seeing you here!
Oliver: Lord Sephiran, as lovely as always. But has it come to this? Must we fight to the death, and deprive the world of one of our beautiful countenances? Can other lovers of beauty endure such a loss?
Sephiran: I confess that your presence has me bewildered. Could this be part of Yune's plan? I simply never would have imagined you here. Your presence proves that Tellius is unraveling at the seams. Judgment cannot come soon enough.

Collector of Beauty (美の探究者, Explorer of Beauty in the Japanese version)

Oliver followed his calling as a guardian of beauty by sponsoring many artists, especially those who depicted him.

Oliver is illustrated in the trading card game Fire Emblem Cipher with the following cards: 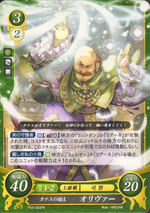 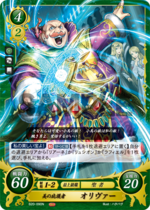