Erin Fitzgerald (Heroes)
Tara Sands (Heroes/Resplendent)
[view]
“No matter the pain it might cause me, I have made my decision. Not even your words could sway me, my brother.”
—Olwen to Reinhardt in Thracia 776

Olwen is a playable character from Fire Emblem: Thracia 776. 18 years of age, she leads the reconnaissance squad in the Friege army. Olwen is the younger sister of Reinhardt.

Olwen first appears in Chapter 10, where she and her subordinate Fred head to Noel Canyon to rendezvous with Largo for surveillance duties. When Noel Canyon comes under attack by Leif's army, Olwen and Fred briefly remain to assist Largo with fending it off. They eventually leave to request reinforcements from Kempf.

Olwen requests reinforcements from Kempf in Dandrum Fortress at the start of Chapter 11. Kempf blandly refuses, pointing out her failure to identify the enemy army who had attacked Noel Canyon. He then taunts Olwen by insulting her brother Reinhardt, causing her to attack him out of anger. Labeling her as a traitor, Kempf apprehends her and throws her into the fortress' dungeon. He then reveals that he had intentionally provoked her in hopes of removing Reinhardt from his position. Olwen is then used as a hostage to force Fred to fight against Leif's army to the death.

While under imprisonment, Olwen finds herself sharing the same cell as several children. It is in interacting with them that she learns that they had been captured in the Child Hunts organised by the Loptr Church. Horrified by the actions of the Grannvale Empire whom she serves, Olwen is struck by severe self-doubt, which she expresses when she is later rescued by Fred in Chapter 11x. Fred advises her to join Leif's army alongside him, which she agrees to after hearing that Leif's ideals are similar to her own.

In Chapter 16A, Olwen asks Leif to allow her to approach Kempf in order to provoke him. If she speaks to Kempf during the chapter, she points out his cowardice, and mocks him for being inferior to her brother. Her words deeply anger Kempf, causing him to abandon his strategic position of defense.

When Leif's army runs into Reinhardt as they cross the Great River of Thracia in Chapter 22, Olwen is reunited with her brother in the midst of battle. The siblings can talk to each other, where Reinhardt futilely attempts to convince her to return home with him. Staunchly opposed to the Empire's involvement in the child hunts, Olwen resolves to choose her own path in supporting Leif's army. Seeing that he cannot convince his sister to stand down, Reinhardt gives her the Blessed Sword as a parting gift before returning to the enemy ranks.

Olwen then goes on to continue supporting Leif in his cause to liberate Northern Thracia from the Grannvale Empire. She returns to Friege and contributes to its reconstruction thereafter.

Olwen is portrayed as short-tempered and quick to anger, as can be seen through the way she responds with violence when Kempf goads her by insulting Reinhardt's name. This causes her to be apprehended and imprisoned, and even then, she attempts to fight back by verbally insulting Kempf.

Olwen is also a person who is deeply driven by a strong sense of justice. This surfaces particularly after she learns of the Empire's involvement in the child hunts, where she is cast in self-doubt over the righteousness of her actions in its name. She then makes the choice to defect from the Empire to pledge her loyalty to Leif's army, believing that its ideals align more closely with her own.

Olwen starts out with below average base stats, especially for a pre-promoted unit. Her pre-promoted status means she will gain EXP slowly and while her offensive growths are good, her defensive growths are lacking. Due to her low durability, Olwen will have trouble surviving enemy attacks, and is better suited for Player Phase combat. Her main advantages are her being mounted, her strong personal weapons like Dire Thunder and the Blessed Sword, as well as her FCM of 4.

Despite her frailty, Olwen can become an Enemy Phase combat unit if she is given the Ambush scroll. With Dire Thunder on hand, she is able to obliterate enemies before they can attack her. However, this can be unreliable as her hit rates are not particularly high, and if she misses, she risks getting doubled and even killed as Dire Thunder lowers her Attack Speed by 12. In order to patch up her hit rates, she should be near a unit with Charisma or Leif in order to gain a hit bonus.

Aside from Dire Thunder, Olwen can opt to use Wind instead, as it has a more reliable hit rate and 10 innate crit. With her 4 FCM and a Leif support, she can use it to get guaranteed crits on second attacks against enemies. She can also quickly reach A rank in Thunder magic, which lets her use Bolting and attack enemies from afar. Due to her poor Strength and underwhelming Sword rank, it is not recommended to give her any swords apart from the Blessed Sword.

It should be noted that you will not be able to recruit Ilios without killing Olwen or leaving her unrecruited. In a vacuum, Illios is generally better than Olwen due to his much better bulk, Speed and higher Sword rank along with him having the exact same growth rates as Olwen with her only advantages being that she has two prf weapons and a higher FCM. However, it is of note that Olwen can dispatch the nine level 18 dark mages that spawn on the right side of chapter 14 easily with the Vantage-Dire thunder combo. Due to the level disparity, Olwen will be able to gain about one level per dark mage, allowing her to potentially gain +8 to all of her stats with the proper scrolls. While anyone can theoretically gain these levels, Olwen is one of the only units that can reliably defeat them all without risking death thanks to vantage + 1-2 range brave weapon.

Blue Mage Knight
A mage knight in Friege's army. Her ideals sometimes puts her in opposition with her beloved brother, Reinhardt. Appears in Fire Emblem: Thracia 776.

Righteous Knight
A mage knight in Friege's army. She now walks her own path after parting ways with her beloved brother, Reinhardt.

“Invaders, hear me: you must leave Imperial territory at once!”
—Olwen's battle quote as an enemy, in Chapter 10
“Not...in a place like...this... Rein...hardt...”
—Olwen's death quote
“The battle begins anew...”
—Olwen's escape quote

"After the war, Olwen returned home to the Dukedom of Friege. There, she spent all of her strength helping the new, young lord rebuild her family's land. Whenever she thought of her brother Reinhardt, she was overwhelmed by an odd mixture of pity and anger. Because of that history, she went on to choose a rather unremarkable man to be her husband, to the astonishment of all."

Olwen is illustrated in the trading card game with the following cards: 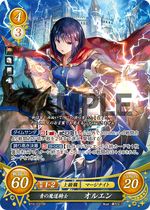 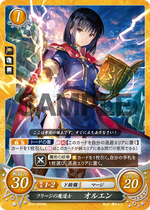 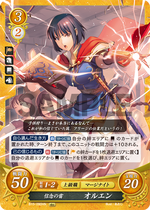 Olwen is the name of a character from the Welsh myth Culhwch ac Olwen, or How Culhwch Won Olwen, where a man named Culhwch hears the name Olwen and despite never meeting her, falls in love with her, and sets out on a quest to find her and then to fulfill the demands her father sets as the brideprice. Her name means "white footprint," as it is said that white lilies would grow where she steps. In the myth, she is courted by and eventually married to Culhwch, a cousin of King Arthur.