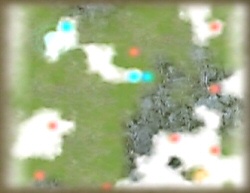 Chapter script
[view]
“Daein has been reborn. Word of King Pelleas's coronation reaches neighboring Crimea within days. Crimea itself has spent the past three years rebuilding from the damage it suffered during the Mad King's War. News that Ashnard's son now sits on Daein's throne sends waves of unease and worry rippling across the land.
Alas, this is not the only thing disturbing the people of Crimea during this time. There is an ever-widening gap emerging between Crimea's noble class and the nation's young ruler, Queen Elincia.
Crimea lost its king during the Daein invasion, and Elincia is still an inexperienced ruler. What's more, her very existence was a secret from the public, and so she came unexpectedly to her succession. Many of Crimea's noble houses raised their voices in protest against her rule. Elincia's desire for a long-lasting peace has driven her to strengthen Crimea's ties with the laguz nation of Gallia, and to renounce Crimea's claim to rule over a defeated Daein. Her political moderation is seen as a sign of weakness among her critics.
Ike, the young hero who led Crimea to victory in the Mad King's War, was granted a peerage for his heroism and bravery. The elevation of a common mercenary to the nobility, however, widened the rift between the aristocracy and the queen yet further. Perhaps to avoid becoming mired in these power struggles, Ike renounced his peerage and took his leave of the court.
Yet Ike's actions did little to placate the nobility. They continue to criticize the queen's every decision, and lay squarely at her feet the blame for all of Crimea's woes.”
—Opening Narration.

On Drifting Clouds (流れゆく雲に Nagare yuku kumo ni) is the prologue of Part 2 in Fire Emblem: Radiant Dawn. This is a new part; you will not be able to use any of the characters from the previous part yet, but don't worry, you will be able to recruit them again later. There is also no base available in this chapter. The Begnion dracoknights will move towards Leanne, although they will not attack her; instead, upon reaching a square adjandent to her, they will kidnap her. The Dracoknight that captured her will then begin moving towards the boundary of the map, and he must be stopped before he escapes or the chapter will be failed. The same thing will happen if either she or Nealuchi are killed. If the Dracoknight is defeated, he will drop Leanne, although she will not be able to move until next turn.

The entire map is in the sky, which means that only flying units are used. However, the clouds provide evasion bonuses and slow down movement, the only time a flying unit is ever affected by terrain. The clouds drift as turns pass, meaning a unit being covered by them one turn may lose the evasion bonus the next.

Haar appears in this chapter on turn 5 and can be recruited by talking with Marcia; however, he will fly off the map after a few turns, so make this a priority or he won't be used in later chapters.