The Oni Savage (鬼人 Kijin lit. Demon Man in the Japanese version) is a combat physical class that is introduced to in Fire Emblem Fates. An offensive class that could be thought of as the Hoshidan interpretation of the classic Fighter class, the Oni Savage class specialises in Strength and Defense. Donning fearsome oni-inspired masks with the intention to instil terror in their opponents, Oni Savages wield Clubs as their weapons of choice. Their promotions are the Oni Chieftain and the Blacksmith, both unique to them. The class returned, as an enemy-only unit, in Fire Emblem Warriors.

Oni Savages are, compared to their Nohrian counterpart, statistically weaker in terms of Strength, Skill, Speed, and Luck, but outclass them in Magic, Defense, and Resistance, and both are even in HP. Growth-wise, they outclass the other yet again in Magic, Defense, and Resistance while falling behind in Skill, Speed, and Luck as before. HP and Strength are the same in this respect.

On the Oni Savage class itself, they are feared for their moderately high HP, Strength, and Defense that are identical with an Apothecary (their Strength only slightly lower than a Fighter's and their Defense only below a Wyvern Rider's and Knight's defenses); their Defense in particular marks a stark difference from past axe-fighters which were plagued with low defense mostly throughout, allowing them to take the front lines more effectively. Their choice weapon in the powerful clubs proves to be deadly against a number of Hoshidan aligned classes (and some Nohrian classes) with their often low Defense and/or HP. An average Speed stat and growth means that a select few classes can reliably follow up their attacks against them (including the physically frail Samurai, Ninja, and Sky Knights to name a few). Even against some of the moderate-to-high Defense units such as Spear Fighters and Knights, a Pike-Ruin Club or a Hammer against the Knights is all an Oni Savage needs to dish out high damage against even them. However, this is not to say that the Oni Savage is far from having exploitable weaknesses. A powerful flaw that axe-fighters are nigh-universally saddled with - and of which happens to be the Oni Savage's worst weakness - is the lowest Skill cap and growth in the game, tied only with the Dark Mages of Nohr. This results in overall pitiful accuracy and low frequency of critical hits or skills activating, not helped at all with the clubs' typically low accuracy despite being more accurate than axes and more critical leaning. This weakness is also what makes fighting against much of the frail units particularly risky as they all generally have high evasion due to their high speeds. Their low luck is another sore spot, contributing to their low accuracy, low critical evasion, and sometimes low evasion even though they possess average speed. Adding more to their misfortune is their lack of a Resistance growth and below average stat in that area, and all of this creates deadly adversaries in the Diviners and Dark Mages. The former of whom possesses average Skill and fairly decent Magic and Speed, the latter of whom makes up for their own lackluster Skill and Speed with a better Defense than the former and unmatched Magic, and both of whom have an inherent weapon triangle advantage against the Oni Savage to further reduce the clubsman's already terrible accuracy. Dual Clubs wielded by them or a Calamity Gate wielded by their enemies can fix this problem in weapon triangle weakness and make them even more accurate, but wielding both can prove disastrous for the Oni Savage.

The first skill the Oni Savage learns is Seal Resistance. After battling (provided the user survived), the target will lose 6 points of Resistance after battle. While this will often be of little use to Oni Savages themselves since they will most likely be attacking with physical axes and clubs, magical units such as Diviners and Dark Mages will like this very much as they can do more damage to the weakened enemy. With most physical units (the preferred opponents of Oni Savages) having low Resistance on average, Diviners and Dark Mages can easily come in and either weaken the enemy further or outright finish them off. Even other Oni Savages with Bolt Axes can take advantage of their slightly below average Magic to deal some meaningful damage. The next and final skill Oni Savages can learn is Shove. They can push an adjacent ally one space away from them on command. This skill can prove instrumental for when a unit with this skill gets between another allied unit and an enemy nearby, moving them out of harm's way by a small margin and allowing themselves and other units to block off a unit in danger of enemy attack. This however will not push allies into spaces they can't cross (like horses into mountains or water, non-fliers into open air, any unit into mist, etc.).

With all of this going for and against the Oni Savage, it's best to have them on the front lines to protect the more frail members of the army against physical units and wear them down for the weaker members to finish off or to do the deed themselves if need be, but they must be ever careful around units with high Speed, high Magic, and high critical rates.

The Oni Savage class takes on an appearance of ferocity and intimidation, donning only a simple sarashi around their upper or lower torso to show off their powerful muscles, and they all wear oni masks on their heads to enhance the look of appearing war-like and demonic (said mask can be worn as an accessory). Their baggy pants are adorned with guards on their sides and waist with one simple loincloth draping over from the front middle, and around their necks are prayer beads commonly worn by monks or oni. Simple arm guards rest on their forearms. Both Oni Chieftains and Blacksmiths keep this outfit on underneath their new outfit additions, but they lack this class's oni mask, arm guards, and prayer beads.

"Oni" is a general Japanese term for a wide range of Yokai in Japanese. They are usually depicted as beings that are similar to demons, trolls, ogres, and devils, and which are armed with Kanabo, weapons that the class notably wields.

Concept art of female Oni Savage (no helmet) from Fates

Concept art of the female Oni Savage (with helmet) from Fates 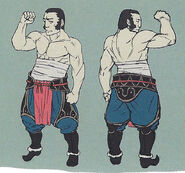 Concept art of the male Oni Savage (no helmet) from Fates 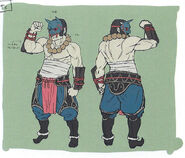