Dark Mage
[view]
“The chosen heroine arrives! And what is she called, this maiden of darkness? Ophelia Dusk is her name!”
—Ophelia

Ophelia (オフェリア Oferia) is a playable character in Fire Emblem Fates. She is voiced by Yuuki Kuwahara in the Japanese version and by Angela Marie Volpe in the English version.

Ophelia is the daughter of Odin. Like the other children in Fates, Ophelia was placed in the Deeprealms to protect her from the war.

In her Paralogue, Ophelia ventures out of the Deeprealms to the Ancient City seeking "The Super-Ultimate Tome" that she read about in her father's notebook. As fate would have it, she bumps into her father who had come to buy tomes from the city as well. Unfortunately, their reunion is cut short by bandits who are pillaging the village. Ophelia and Odin go off to confront them and eventually dispatch the bandits. After the battle, Odin informs Ophelia that the tome she was seeking did not exist. The notebook she had read was not a list of powerful tome, but rather, weapon names he created on his own. Though Ophelia is disappointed, Odin hands her a tome he had bought for her while they were in battle. Since the tome had no name to it, Odin tells Ophelia to give it one. Without a second to even think, Ophelia decides to name it Missiletainn, a name she saw in the margins of the last page of Odin's idea book. Even though the book said that the Missiletainn sword was a crummy weapon, Ophelia loved the name nonetheless. Odin admits that it is the only name he has ever given to a real weapon. Odin asks his daughter to join his army, a request Ophelia happily accepts and the two vow to walk forward together as the "chosen two".

In her A-support with her father, Ophelia shows Odin a peculiar mark on her arm that first appeared when she joined the army. Odin recognizes the mark as the Brand of the Exalt, but cannot tell her what it is due to his oath of secrecy when coming to the world of Fates. While Odin admits that the mark has no special powers, he tries his best to explain the significance of the brand, as it is a symbol of her heritage. Though Ophelia does not fully understand it, she is delighted to hear that her father has the mark as well. But seeing how much talking about it brought sorrow to him, she tells him to tell her about it later when he feels ready and hopefully when he can show her his own Brand.

In Heirs of Fate, Ophelia and Nina serve as Forrest's retainers, mimicking their fathers serving Leo.

Ophelia is an optimistic and bubbly young girl who looks at the world through wondering eyes. Much of her personality are out of admiration of her "Chosen Father", whom she emulates greatly through giving weapons grandiose names and shouting over-the-top names for her spells while doing flashy poses. She loves her father's eccentric personality and is one of the few people who truly understands how he thinks. However, her support conversations with her mother suggests that she feels inferior to her father's abilities to the point she finds she tells the Avatar in her support conversation that she feels like a mimic of her father. In her support conversation with Midori, she reveals to have abilities of foreseeing the future.

She tends to be dreamy, spacing out whenever she is not in combat. She also makes use of stars and stones to perform curious incantations. She considers herself sworn to Forrest's service just as her father is sworn to Leo, and she can be excessively fierce in her attempts to protect the prince, to the point of nearly attacking street merchants whose perfume caused Forrest to cough. She is very overprotective of Forrest, and when she is asked to stay behind while Forrest shops, she becomes very worried about him.

She is the one most skilled at skipping, and was born on September 15.

*Ophelia will receive whatever secondary class that the Avatar has access to if she has achieved an S-Support with him.

Ophelia inheritance stat spread begins with Odin who has no real emphasis in any of his stats, leaving her with the same unclear specialty. Instead, Ophelia's potential lies in whoever her mother is, as their strength and weaknesses becomes hers, making her a stronger version of them. She always has a positive increase in her Magic, with no less than a +1 boost, allowing her to function well in Mage classes. She also has a positive increase to her Skill and Luck regardless of her mother, giving her incentives to use Skill and Luck stat activated skills. Ophelia excels in Tome/Scroll wielding class as one, she has a personal tome, Missiletainn, which is stronger than Fimbulvetr and increases her Skill and Resistance by one when equipped. Her Personal Skill, Bibliophile, increases her Critical Hit rate so long as she has 3 or more tomes in her Inventory. Her base class is the Dark Mage and thanks to her always positive caps and good growths in Magic, she operates effectively. She has Heartseeker, reducing the avoid of adjacent enemies she's encountering, and Malefic Aura, increasing magic damage to enemies near her.

Ophelia's promotions have different perks depending on her mother. For most Magic reliant mothers, such as Elise, Nyx, and Orochi, Sorcerer is the best route as she focuses solely on her Magic potency in this class. She learns Vengeance which adds more damage to her attacks whenever she is injured and Bowbreaker to avoid Archer units, especially on Conquest where they are prevalent in the Hoshidan army. For mothers who are more physical oriented like Charlotte, Effie, and Kagero, Dark Knight is a worthy option as their strength means that she can effectively use the new ability to wield Swords, while still having access to Tomes to exploit her Personal Skill to the maximum. She learns Seal Magic to cripple enemy Mage units and Lifetaker for a good regeneration skill, though it requires that she kills her enemy to receive the 50% health recovery.

Odin passes down his Samurai secondary class to Ophelia. Depending on her mother, she can perfectly operate in the class, though either having a more balanced or physical oriented mother are the deciding factors if choosing to reclass into this class. There is the downside that both the Samurai class and its promotions lack access to tomes, which means that Ophelia can use her Personal Skill in these classes, however she will have to fill three of her five inventory slots with tomes, leaving only two open for her actual usable weapons. All in all, if losing the bonus of her Personal Skill is not too much of a detriment, Ophelia can operate well in the class. If not, there are skills to amass in all three classes.

Samurai provides Duelist's Blow, increasing her avoid by 30 when initiating a battle, and Vantage, allowing her to attack first when opponents initiate combat on her. This skill in particular syncs well with Vengeance as, once she reaches half health, not only does she always attack first, Vengeance's high activation rate and reliance on her being injured means that she can easily clear out enemies who try to take her down. The Swordmaster class is the better of the Samurai promotions if intentionally trying to retain her Personal Skill's effect as it only uses Swords. Skill wise, it provides Astra which can possibly lead to spectacular damage thanks to the constant flowing attack. However, this is hampered by Ophelia's only average skill growth and the fact that Odin (who himself has average skill growth) probably won't pass down much skill to begin with. If keeping her in the Dark Knight class, Swordfaire adds more potency to her sword attacks. Master of Arms has three weapons at its disposal and proves difficult when trying to use her Personal Skill as it will limit her to only two out of the three weapons at a time. Master of Arms provides Seal Strength to cripple physical oriented units, and Life and Death, increasing damage dealt by 10, but also increasing damage received by the same. It is risky to use, but can be rewarding if used correctly.

Since Odin's entire class set is passed down to Ophelia, pulling any of Odin's skills learned from his Buddy classes from Leo, Niles, and Laslow are advisable.

Ophelia means "help" or "serpentine". It is also the name of a character from the play Hamlet. Said character is usually depicted saying unusual verses, which can be seen in Ophelia's theatrics.

Ophelia as a Dark Mage in Fire Emblem 0 (Cipher).

Ophelia as a Sorcerer in Fire Emblem 0 (Cipher). 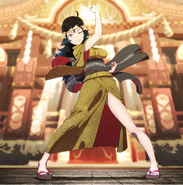 CG artwork of Ophelia in the Hoshidan Festival of Bonds DLC episode donning a yukata. 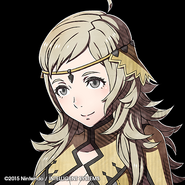 Possible hair colors for Ophelia in My Room. 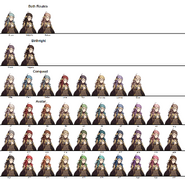