Orgahil is the name for both a Pirate organization and their castle on the eastern part of the island north of Agustria. It is the final castle the player has to capture in Chapter 3 of Fire Emblem: Genealogy of the Holy War to clear the chapter.

In Fire Emblem: Thracia 776, during the ending of Chapter 14x, Lewyn meets up with August and says that he needs to go back to the Bragi Tower and to Orgahil, although the reason was not specified.

Orgahil castle was named after the pirate gang who made it their base, the Orgahil pirates that have been in Agustria for a long time.

The seas around Bragi Tower where home to many ruthless pirate gangs who would target ships on pilgrimage to the tower. These pirates would often bribe the immoral Agustrian army to look the other way during pirate attacks.

Over ten years before the start of Genealogy of the Holy War, Lord Ring of Jungby was heading toward the nearby Bragi Tower for a pilgrimage with his children, but the ship was caught in a storm and sinking was a huge possibility. Lord Ring was able to escape the ship with two of his children, Edain and Andorey, but was unable to find Brigid who was playing in the ship's storage room, so he had to evacuate without her. Even after his best efforts to find her, she was never found. What actually happened was that the ship didn't sink, but it was taken over by the Orgahil pirates, and when the leader of the Orgahil pirates found her, he decided to raise her like his own daughter. Eventually, she would grow up to be like her honorable foster-father, and she would become captain of the pirate gang.

In Chapter 3, two pirates Dobarl and Pizarl, without the consent of their captain, Brigid, decide to take advantage of the war that is currently happening between Sigurd's army and the Agustrian force commanded by King Chagall by pillaging the coastal areas. After King Chagall is killed, Dobarl manages to raise a mutiny by revealing that Brigid was not the Captain's real daughter, and convince the pirates to try and kill Brigid. Under the new leadership of Dobarl and Pizarl, the Orgahil pirates decide to invade Agustria, thinking nothing will stop them. Eventually, Sigurd's army manages to defeat the pirates, rescue Brigid, and capture Orgahil, only to have to retreat to Silesse after being branded a traitor by Grannvale. 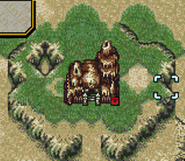