Orochi (オロチ) is a playable character in Fire Emblem Fates and an ally in the Birthright and Revelation routes. She is voiced by Yuka Igarashi in the Japanese version, and Paula Tiso in the English version.

Orochi was born to a noble house in Hoshido, and her parents worked in the castle as imperial Diviners. Her family was mocked because diviners were known to give both good and bad fortunes often. She found herself in the services of Mikoto when she showed kindness towards her and did not care about what effects the fortunes would give her. Known to be best friends with Kagero since childhood, the two met when Orochi went to gather herbs near Kagero's home and dropped her basket in a river. The two ended up falling into the river trying to retrieve the basket, and they have remained as close compatriots ever since.

Sometime before the events of Fates, Orochi saw a vision where Mikoto would die in a future incident. She warned her of the incoming danger, but was unsure how and when it would happen. It was too late to warn her.

Orochi first appears after the Avatar takes down the Nohrian forces that attacked Fort Jinya. She alerts the Avatar that Takumi and Ryoma have gone missing. Orochi joins their army to aid them in their cause to repel the Nohrian invasion.

When the Avatar and their crew arrive at Fort Jinya hoping to receive help from Hoshido for their cause, Yukimura, Saizo, and Orochi do not believe their story and promptly orders the guards to capture the Avatar. After the Avatar defeats them, Orochi listens to the Avatar's story, but does not believe them as they cannot properly explain their story. Nevertheless, Orochi and the others allow the Avatar to leave unhindered.

Later, Orochi, Saizo, and Reina arrive at Mokushu to rescue Kagero. Unfortunately, the are ambushed and Saizo deploys an emergency smoke bomb to warn other Hoshido soldiers of the potential danger of their area. Kaze sees the smoke and tells the Avatar that Saizo is in trouble and the Avatar decides to go save them. After rescuing them, killing Kotaro, and rescuing Kagero, Orochi finally believes their story and joins their cause.

Contrary to her calm and old-fashioned way of speaking, Orochi has a playful personality. She is very competitive about her medical skills and her magical ability as shown in her supports with Hayato and Nyx, challenging them to medicine-making contests, and a duel of the magic arts respectively. She also enjoys doing fortune telling with cards. She is experienced in fortune telling, as her supports with Silas show that she sees that he will be badly hurt in a future battle, which comes true at their A Support conversation when Silas apologizes to her when she saves him from an enemy survivor in the aftermath of a battle.

According to the 4Koma book and her supports with Kaden, she adores cats, and is afraid of rats. Orochi has an unusual sense of humor, as she will laugh even to a boring joke. She is the loudest drinker in the army. Her birthday is June 19.

◾ Note: Growth Rates as an Onmyoji

Compared to her fellow Diviner, Hayato, Orochi is a much stronger mage character damage wise given her very high Magic growths and solid Skill and Resistance growths. However, she trades this for dangerously low defenses and HP, making her incredibly frail. She also is much slower than Hayato, meaning that she will not be able to double as easily as he can. Overall, if looking for hard burst magic damage in Birthright and Revelations, Orochi is a great choice. Orochi's personal skill, Capture, makes her one of two units in Fates that can Capture units. Given the notoriously low average growht rate for Resistance, Orochi is a solid choice for capturing many units, especially the high defensive units like Generals and Great Knights due to their low resistances to compensate for their high defenses. Given her utility as a capturing unit and pure offensively oriented stat growths, Orochi is worth considering if that is what the player is looking for. Unfortunately, enemies in Birthright generally lack skills, and generally won't be useful as the likes of Haitaka, Kumagera, Gazak, or the four-rally Master of Arms, so her capturing capabilities won't really be put to full use.

As a Diviner, she starts off with Magic +2, which like all stat boosting skills is good in the beginning, but best abandoned for better skills with unique effects. At Level 10, she gains Future Sight for a chance to double her battle EXP gains. Orochi's two promotion options are the Onmyoji and Basara classes. Onmyoji further enhances her Magic potency, further enhancing her stat strong suits. Rally Magic can be used to assist other Magic units while Tomefaire further adds more magic damage to her attacks. Basara balances her out a bit, most notably increasing her HP gains to a 55% chance. Rend Heaven is the only Attack skill in Orochi's two classes and with her high skill, it activates fairly often. It typically won't add much damage to most enemy units, as non-magical foes typically have 0 Magic, but it is definitely a help against enemy Sorcerers and Adventurers. Quixotic boosts the Hit Rate of herself and her opponent in battle by 30 percent, almost guaranteeing that she can hit enemies. It also boosts her skill activation rates, though she should capitalize this skill by mainly engaging against enemies that either cannot retaliate against her or does not have skills that can utilize the secondary effect.

Orochi's secondary class is the Apothecary class. Given her stat strengths, this class set is mainly for utility. Apothecary provides Potent Potion and Quick Salve for players that use Potions in battle. Merchant provides Profiteer to acquire Gold Bars and Spendthrift to expend them for extra damage, which can be useful to score kills or perhaps provide the extra damage needed to Capture. Mechanist provides Golembane, which is mainly for Golem type enemies, which appear mainly in My Castle battles and a few select chapters. Replicate can be used to increase her already good offense, or if the player spots several enemies that they find desirable, allow her to capture those units quickly without much hassle. 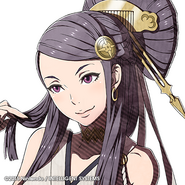 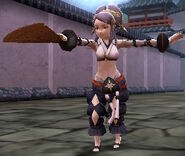 Orochi's model for My Room.
Add a photo to this gallery