Chapter 5: The Exalt and the King

Wyvern Rider
[view]
“I won't ask for your name. Only your life!”
—Orton's pre-battle quote.

Orton (アーリオ, Aglio in the Japanese version) is an soldier in the Plegian Army.

After Maribelle is rescued from Gangrel and Aversa thanks to Ricken, Gangrel orders Orton and his forces to kill Chrom, Emmeryn, and his forces, seeing Maribelle's rescue as an act of treason. After being promised additional forces by Gangrel, he attacks Chrom's forces, eventually failing in the end.

His birthday is the 10th of October. 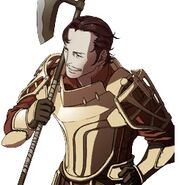