View source
watch 01:09
Who is Oscar?
Do you like this video?
Play Sound

Bryce Papenbrook
[view]
“I love Crimea, but I'm happy here. I want to serve Ike as a member of the Greil Mercenaries.”
—Oscar talking to Kieran in a support conversation

Oscar is a playable character from Fire Emblem: Path of Radiance and Fire Emblem: Radiant Dawn. He is a former member of the Crimean Royal Knights 12th Regiment with Kieran, and is the older brother of Boyd and Rolf. In a support conversation he shares with Janaff in Path of Radiance, Oscar is revealed to be 24 years old.

When Greil later passes on, Oscar steps in to back Ike up as the new leader of the company, providing him with the solace and support he needs in order to live up to his father's name.

In Chapter 3-1, Oscar can reunite with Rolf's biological mother when he visits a particular house in this chapter. Upon recognizing her, he will leave abruptly, ignoring her pleas for him to return.

Rolf's mother will then trespass into the encampment of the Laguz Alliance in the proceeding chapter, and is saved from being captured by Oscar and Boyd. Boyd promptly gets into a heated confrontation with her, revealing the fact that she had abandoned her entire family, including her own son, in order to elope with an external lover. While this is happening, Oscar tells her that he will attempt to get Rolf to meet her. He then tells her that he has not forgiven her and that he is only doing this because she is Rolf's mother. Rolf will refuse to do so almost immediately, asserting that the only true family that he has is that of the Greil Mercenaries. Touched by the strong words of his brother, Oscar has her leave the encampment.

Oscar is also renowned for being a good cook, and enjoys receiving feedback on his culinary skills. This may be observed in a support conversation he shares with Ike, where he readily agrees to prepare meals to satiate Ike's hunger.

Oscar combines good bases, solid growth rates in most key areas, great availability, a good weapon type, and all the utility offered by a mounted class all into one package. He can contribute from the moment he joins and will only get better from there. His only real weakness actually comes from how balanced his growth rates are. With some unlucky levels, it may become difficult for Oscar to keep up with your other units, especially early on when the enemies are still somewhat threatening. This isn’t a major issue, however, and won’t affect the majority of players.

When Oscar promotes into a Paladin, it is recommended to select Axes as his second weapon. It gives him access to powerful steel axe forges immediately, and also allows him to use a more powerful 1-2 option in hand axes. Oscar can also select bows, if you wish to utilize his triangle attack with his brothers, but since most people would not consider Rolf worth the effort, this is a gimmick more than anything else.

Oscar is the easiest potential Silver Knight to train, as he can be Promoted as early as Chapter 3-5. However, Oscar has some key flaws that hold him back from his true potential. Lances tend to be geared towards fighting Sword Generals and Swordmasters, neither of which Oscar can effectively defeat in one round, either due to not having enough strength or speed. Meanwhile, Titania joins at the same time as Oscar, can promote earlier, and can deal with Horseback and Wyverns better than Oscar can. Thus, Oscar tends to fall in the shadows of Titania.

However, Oscar still has some merits. As a Silver Knight, Oscar's speed can give him better luck against armored units, and can inflict more damage upon them, especially with the threat of his new Sol skill. In addition, he can also attack the opponent while still staying off the frontlines if need be. His stats are still okay, meaning that he can still be used to a degree of success when trained correctly. One must watch out for his low defenses, though, as that can be his downfall, and he has trouble against axe users due to gaining bows, which don't turn the tides against axe wielding foes. Overall, while Oscar is not the most consistent unit, he is still a usable asset to one's team.

Compared to other trained gold and silver knights, Oscar is the most frail, with the second lowest defense growth and lowest resistance growth. His speed and skill dwarfs that of characters like Kieran, however. He has higher Speed and Luck than Geoffrey, but slightly lower HP, and much lower Strength and Resistance.

Oscar is a representation of the green cavalier in the classic Cain and Abel Archetype, and he excels in Speed, Skill, and Luck Growths.

Agile Horseman
A straightfoward but accommodating member of the Greil Mercenaries. Has good instincts. Appears in Fire Emblem: Path of Radiance. 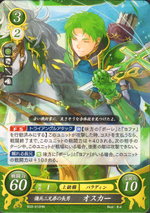 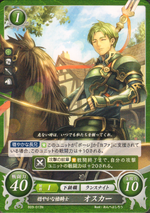 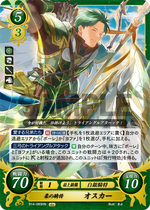 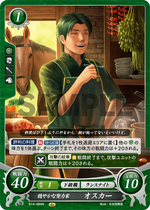