Member of the Freeblades of Fiana

Brendan McKian
[view]
“Why're you so calm, Halvan!? Our village is being attacked!”
—Osian to Halvan in Thracia 776

Osian (Orsin in Fire Emblem Awakening) is a playable character in Fire Emblem: Thracia 776. He is a member of the Freeblades of Fiana, and resides at Fiana with his father. Osian also shares a close relationship with Tanya.

Osian first appears in Chapter 1, where he joins Leif and Eyvel on their mission to quell Raydrik's invasion of Fiana and save Nanna and Mareeta. Osian can visit his home in this chapter, where his father will give him his axe, chastising him for being careless in leaving it behind.

Osian, along with the rest of the Freeblades of Fiana, is later separated from Leif and Eyvel in Chapter 3, as the prince is captured by Raydrik. Vowing to save Leif, Osian, along with Halvan and Ronan, embark on a quest to Manster, but are captured by Hannibal's patrolling troops when they are found roaming around Manster Castle. The trio regains their freedom at the end of Chapter 7 on Leif's behest.

In Chapter 8, Osian can speak to Marty to recruit him to Leif's cause. Threatening to attack Marty for taking up arms against Dagdar and Eyvel, Osian manages to convince Marty to defect from Gomes and join Leif's army.

When Leif's army storms Dagdar's mansion to save Dagdar and Tanya in Chapter 8x, Osian is reunited with Tanya. He can speak to her in this chapter, where he will express concern over her well-being, prompting her to cry in his arms.

Osian then goes on to continue supporting Leif in his cause to liberate Northern Thracia from the Grannvale Empire. He will return to Fiana thereafter, where he gets married and is blessed with many children. Although his wife is not named, it is heavily implied that she is Tanya due to the similarity of their endings.

Osian is a brash, hotblooded youth, prone to speaking his mind without tact. This can be seen in the way he resorts to using expletives to express his outrage over the bandit invasion of Fiana in Chapter 1, prompting both Eyvel and Halvan to urge him to calm down.

Osian's tactlessness extends even to Tanya, his implied love interest. Although he genuinely cares for her, he does not understand how to be gentle and kind, as he calls her an idiot for worrying him in Chapter 8x. This prompts Tanya to cry and lash out at him for being insensitive, sending him into a state of fluster.

In terms of sheer damage output, Osian is one of the deadliest attackers in Thracia 776. This may be surprising due to Osian's average base stats, but he truly shines in his unique capacity (especially in the early chapters) to manipulate critical hits on both player and enemy phases from Chapter 1 onwards.

On player phase, this is achieved by Osian's powerful personal weapon, Vouge. One of the best weapons in the game, Osian acquires it at an early point in the game, and is able to exploit its whopping 30% critical hit bonus. Combined with his FCM of 3, this bonus is tripled to 90% if he double attacks. This is a very common occurrence given Osian's decent Speed and the very slow enemy units that populate Thracia.

On enemy phase, Osian's Wrath skill guarantees that he will land a critical hit on his first attack. Wrath does not interfere with Osian's FCM, allowing him to perform double critical attacks frequently. If another Vouge is desired, one can be stolen in Chapter 16B.

Osian benefits tremendously from a wide number of scrolls. The Od Scroll helps improve Osian's accuracy, while the Hoðr and Baldr scrolls help with his Strength. When available, he can also use the Dáinn Scroll to boost his Defense and hopefully his Movement. If Osian's Speed is lacking, the Ced and Fjalar scrolls can be used to rectify this, with the added benefit of helping to patch up his weakness to magic.

Scolded Soldier
A member of the Freeblades of Fiana. Bright and friendly, but quick to lose his temper. Appears in Fire Emblem: Thracia 776.

Eyvel: What's happening? Something's wrong...
Halvan: I'll go take a look, Lady Eyvel. Please wait here. Lady Eyvel, the village is filled with Imperial troops. It looks like they attacked while we were gone...
Osian: What? Damn, those bastards! Lady Eyvel, let's go!
Halvan: Calm down, Osian. If we just run in without thinking, we'll just get beaten down.
Osian: Why're you so calm, Halvan!? Our village is being attacked!
Eyvel: No, Halvan is right. Calm yourself, Osian. Lord Leif, it looks like the Empire has sought us out. Please make your escape while we distract the Imperial troops. Fin, take care of him...
Leif: Eyvel! Nanna is still in the village. I can't just leave her and run.
Eyvel: I will ensure her safety. Don't worry.
Leif: No, that's not it... I've chosen not to run any more.
Eyvel: Finn, what about you? Are you going allow Lord Leif get himself in danger?
Finn: Lord Leif is already 15 years old. He is old enough to make his own decisions. As his servant, I will respect his judgment and follow his commands.
Eyvel: 15... Well, we did bring him with us to defeat the pirates. Fine, If Finn says so, it's all right with me.
Osian: Well, are we done? Let's hurry up and go kick their asses!
Eyvel: Yes. But be careful. Although they are Imperial troops, the lower-ranking ones are civilians forced into the army. If you can, don't kill them, take their weapons and let them escape. Understood?
Osian: But we can hurt them until they submit to us, right? They'll kill us if we don't.
Eyvel: Yes, but don't overdo it, all right? Especially you, Osian.
Osian: Come on, don't you trust me, Lady Eyvel?
Eyvel: All right, let's go. Show them the Freeblades of Fiana' strength!

Osian's father: Osian, you working hard? You better not be bein' a nuisance to Lady Eyvel.
Osian: Come on, spare me the lectures, old man.
Father: Ha, haven't fixed that foul mouth of yours, have you, kid? Well anyway, here. This is what you came for, right?
Osian: Yeah, thanks! I don't feel right unless I fight with this axe.
Father: Stupid kid. I've never heard of someone forgetting his weapons to a battle.
Osian: Hey, I told you I don't need the lectures.
Father: Hmph. Well, what're you waiting for? Go and help Lady Eyvel!
Osian: Yeah, I'm going!

“Damn... Leif! We'll go rescue you. You better not die until then!”
—Osian's quote after Leif seizes the throne, Chapter 3

“Those bastards from Thracia! I'll kick their asses the next time I see them!”
—Osian's quote at the end of Chapter 7

Osian: A mother, eh... Well, my mom died long ago, but my dad is still going strong. I guess even a geezer like him is better than not having one at all...
Eyvel: That's right, Osian. You're still better off compared to Halvan. Take care of your father when you return to Fiana.

Osian: Tanya? What the hell are you doing out here?
Tanya: Osian!? Can't you see? I came to help you guys out.
Osian: Help us out, eh? Well, we're not so desperate as to ask for help from a kid. Now off you go.
Tanya: Who're you calling a kid!? You're the kid! Fine, I'm going. I never wanted to come here anyway. Hmph!

Osian: Tanya! You're okay! You idiot, you had me worried.
Tanya: What do you mean, idiot! I never asked you to worry yourself over me, anyway!
Osian: You know, why can't you just say thanks? If we had come a little later...
Tanya: What do you mean! You're the one picking the fight! ...You could also be a little...kinder...
Osian: W-Whoa! D-Don't cry! Um, so... I'm glad you're okay. Yeah...

"After returning to Fiana, Osian married, and was blessed with many children. However, he remained prone to mood swings all his life, and his quick temper was inseparable from his kind heart. He eventually earned a reputation around the village as "that oddball old man." Despite not being fond of the other villagers, he proved to be a reliable man, always willing to help those in need."

Osian is illustrated in the trading card game with the following cards: 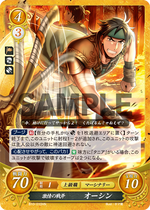 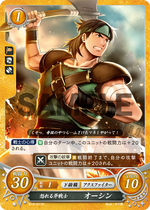 Othin is an alternate spelling of Odin. Given the katakana spelling, it could also be based on Oisín (Osian in Welsh), a member of the Fianna in Irish legend.