DC Douglas
[view]
“Finally, the time has come for us to take the power of the Chaos Dragon !”
—Oskar to Darios and his first words on screen.

Oskar is the main antagonist of Fire Emblem Warriors. He is the sole ruler of the Gristonne kingdom and the father of Darios.

While little is said or even seen about Oskar, from his war against Aytolis, it could be said Oskar is proven to be willing to burn bridges with ally nations in order to achieve his ends, as he turned on Aytolis despite years of peace between it and Gristonne.

The waiting screens suggest that he was an absent father in Darios' life, which possibly made it easier for the latter to turn on him before becoming possessed. Oskar appears to be very neglectful or oblivious, not even noticing Darios' drastic personality change under possession of Velezark and simply assumed his son had come back to him. When a possessed Darios stabbed him, Oskar was shocked and stared at his son with betrayal and sadness, his last words being a reprimand of his son for his apparent treachery.

“Darios... How do you intend to clean up this mess you've made?”
—Oskar talking to Darios about Rowan and Lianna following him.
“D... Darios. You fool...”
—Oskar's final words 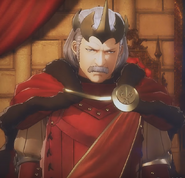 Oskar, moments before his death.