Knight
[view]
“I am Oswin, of the Ostian Knights. I fight in this army at the side of Lord Hector.”
—Oswin

Oswin is a playable character in Fire Emblem: The Blazing Blade. He is a Knight of house Ostia and is sent by Lord Uther, Marquess Ostia, to accompany Hector and to keep an eye on him as he goes out to investigate the disappearance of Elbert, Eliwood's father.

Oswin was the one receiving all messages from house Ostia including the one that announced the death of Uther which he refrained from delivering to Hector in accord with Uther's dying wish. This was to prevent Hector from wanting to return home. Therefore, Oswin took Uther's dying wish above his duties, but it is noticed at many occasions throughout the game that Oswin's loyalty to house Ostia is unwavering.

In a support conversation between Oswin and Dorcas, Oswin tells Dorcas that he sees potential for a knight in him and encourages him to become a knight of house Ostia, though Dorcas kindly declines since he only fights for the sake of his wife Natalie. Additionally, this support chain reveals that despite his high position in the Ostian military, Oswin is not noble-born, so he worked his way to the top.

In his supports with Priscilla, it is revealed that he used to work as one of the vassals for House Cornwell, therefore he witnessed its decline and fall but was unable to do anything.

If he gets A level supports with Serra, it's shown that she looks up to him and craves for his praise, being completely devastated when he reprimands her and she mistakenly thinks he hates her. Their shared ending states that they got together after the war, despite the huge age difference and their clashing personalities.

It is unknown if Oswin participated in the War on Bern or even if he lived to see such a day.

Oswin has great base stats and availability to offset his class being Armor Knight. His longterm usefulness becomes even greater with the first Knight Crest appearing in Chapter 16(E)/17(H). However, because of his low movement, he will gradually be outpaced as other units start promoting and being able to tank just as well as he can.

The first Knight Crest in Chapter 16(E)/17(H) has competition with one of the cavaliers as well, as it can be given to them instead of Oswin, and may be the generally smarter idea to get a powerful paladin earlier instead of a general that may fall off on later maps due to the non-knight player units outrunning him.

Oswin: "Gaaaah..."
Hector: "Oswin!!"
Oswin: "Lord Hector... I'm sorry but.. I must withdraw."
(End of chapter)
Hector: "Oswin, how are your wounds?"
Oswin: "I am most truly sorry, my lord. It was my duty to keep you safe from harm, and now..."
Hector: "Say no more. You still draw breath, don't you? I still need you by my side. You're my link to our spy network, after all. I need you to continue in that role. Understood?"
Oswin: "Yes, of course! I have no intention of shirking my duties."

“For the honor of the knights of Ostia.”
—Final Battle Quote
“Mark. If the goal is to defend, knights are your best hope. We can use our thick armor form a living shield. I await your orders, Mark.”
—Quote from Talons Alight

Oswin served as a vassal to Marquess Ostia. His was a calm, reasonable voice in Lycia's ruling government.

Oswin is illustrated in the trading card game with the following cards: 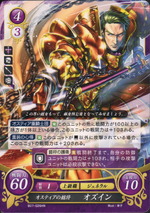 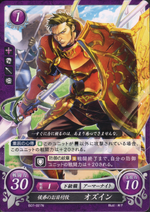 Oswin as a General in Fire Emblem 0 (Cipher).

Oswin as a Knight in Fire Emblem 0 (Cipher).

Oswin's portrait in The Blazing Blade.

Oswin as a Knight.